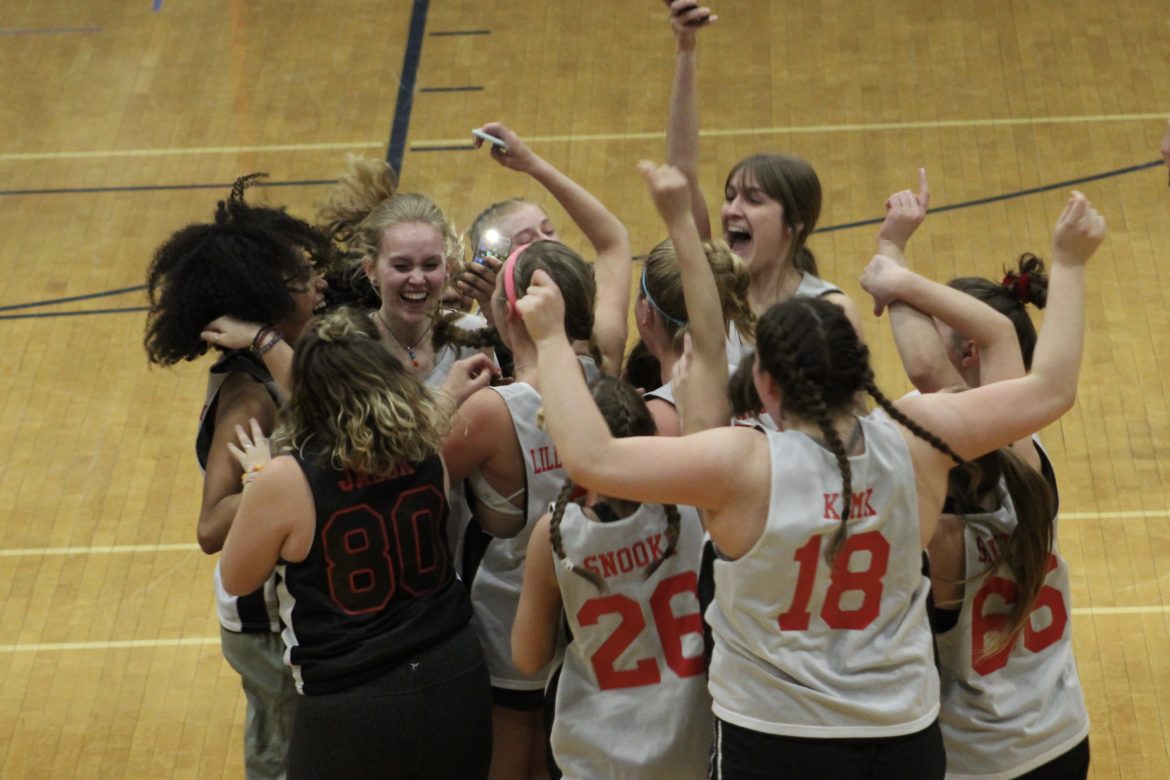 The high school band battled giant speakers that were blasting music. The gym was full of students and parents watching in anticipation, cheering for their favorite teams. It was the championship game of the 50th floor hockey season at East Lansing High School.

ELHS finished its annual, six-week floor hockey season March 26. Tom Cleary said that floor hockey is a long-standing tradition that has lasted more than 50 years. He has been involved in the annual event for the last 30 years. Devyn Colon celebrates her goal during the championship game.

“Floor hockey is a league for just the students in the school. They’re playing for only one goal, and that is to win a hat in the championship of the tournament,” Cleary said. “This is how it is every year. Literally, it never changed.”

Every Saturday for six weeks, students arrive at the school at 8 a.m. Cleary said the atmosphere is loud and exciting because the students cheer on their friends. They also bring speakers to play music and TVs to play video games.

White and blue hats with the words “East Lansing floor hockey champions” on the front serve as the prize for the winning teams.

Senior Zion Keyes said that floor hockey, referred to as flockey by students, is all about winning hats. She said the hats are the ultimate symbol of being a champion at ELHS. The winning team Limited Edition celebrates after their victory.

Floor hockey is a tradition that brings students together. Freshman Olivia Van Dyke said it’s completely student-led. Everyone makes teams, gets jerseys and creates nicknames for each team member.

“It really brings you into the whole high school experience,” Van Dyke said.

Mark Pendred has been involved with floor hockey at ELHS for 20 years. He said the kids take their teams very seriously, and wear their jerseys to school every Friday during the season. Devon Colon and Zion Keyes with their prized flockey hats.

Keyes’s team won the girls’s championship game. She said she has been looking forward to this day for four years. She said teams are already planning for next year’s flockey season, and she doesn’t see this tradition ending anytime soon.

Emily Elderkin is a broadcast journalism major and Spanish minor at Michigan State University. She is proficient in Adobe applications such as Premiere, Lightroom, and Photoshop, as well as Final Cut Pro. She is also adept in many social media platforms. Her work has been published by the Spartan Newsroom and NBC affiliate in Grand Rapids WOOD TV8. She expects to graduate in 2020.