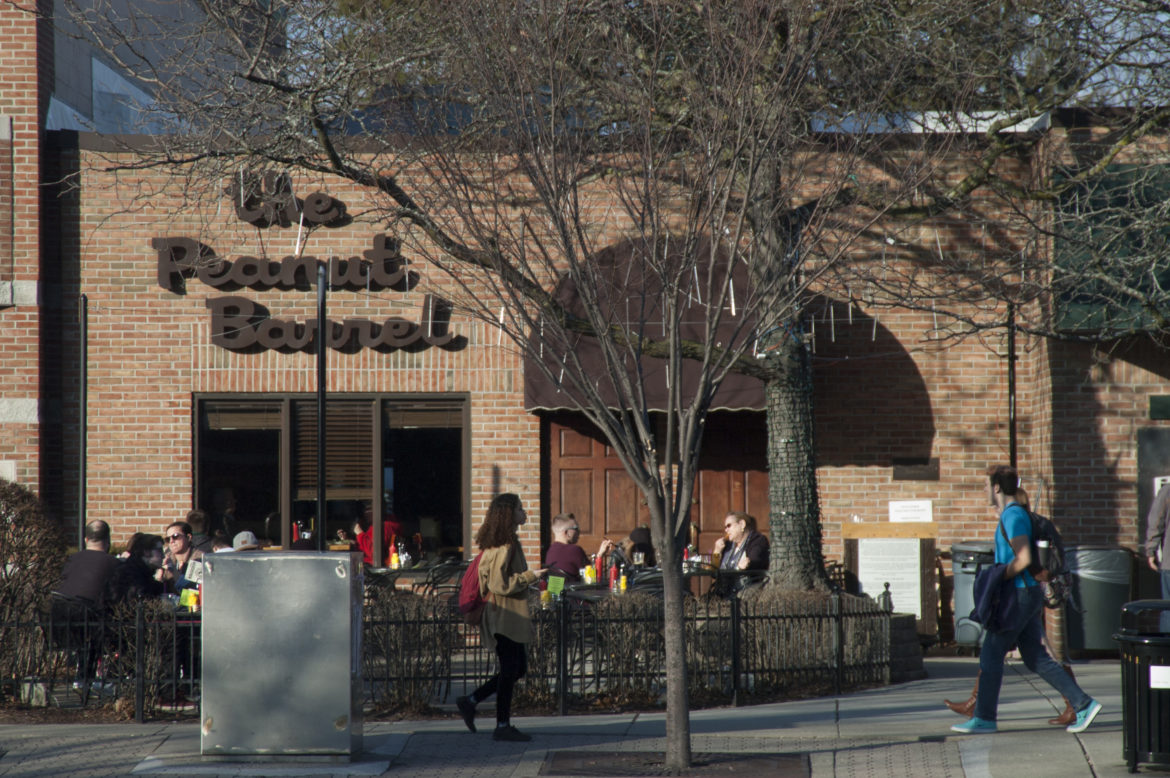 Guests eat on the patio in front of The Peanut Barrel on Grand River Avenue.

Due to the close proximity to Michigan State University, many East Lansing businesses report that they have a high amount of student customers. When students leave campus during semester breaks and holidays, these businesses suffer a certain loss.

According to 2012 Economic Census data, there are 776 businesses with paid employees in East Lansing. Although there is a plethora of businesses, from fast food to clothing stores, many of the businesses on the outskirts of campus have some degree of student business. According to 2010 Census data, 40.2 percent of East Lansing residents are in the age bracket of 20-24 years old. Local Quality Dairy manager George Kenney said that this demographic contributes to the majority of their liquor sales.

“We actually have a rewards program that’s for everyone, but students take advantage of it the most,” said Kenney. “They often earn points to use towards alcohol purchases.”

Kenney said there is a very noticeable difference when students are out of session. According to Kenney, Quality Dairy receives a lower volume of customers, who are mainly local residents, but they don’t change their hours or prices to accommodate.

The local CVS Pharmacy on MAC Avenue also receive a lower volume of customers during the semester breaks, according to its manager of eight years, Dustin Lundberg.

“We usually make one-third of what we usually make so our budget accommodates this,” said Lundberg. “But everything is done on a national level, so we don’t offer extra promotions besides those.”

Restaurants, especially fast food, appear to be a favorite among students. One popular stop for wings and entertainment is Buffalo Wild Wings.

A manager at Buffalo Wild Wings on Albert Avenue, Lou DeAvila, said that their restaurant receives the most business from college students. DeAvila has witnessed the changes when students are gone for breaks.

Several businesses reported that they are negatively impacted during school breaks by losing student employees in addition to young customers.

According to the 2015 Current Population Survey, 43 percent of full-time undergraduate students in the U.S. work while taking at least 12 credits of classes.

“At least half of student employees leave for longer breaks but it just depends,” said DeAvila.

Kenney said there are usually more student employees working at his convenience store than any other employees. He said although Quality Dairy loses business during school breaks, they do not change their hours or prices to accommodate these losses.

“We’re a convenient store,” said Kenney. “If we closed earlier we wouldn’t be so convenient anymore.”

According to Kenny, Quality Dairy still receives business from local residents to keep the business going during slow months.

A local dry cleaners on MAC Avenue named Twichells Dry Cleaners & Tailors experiences a lot less dependence on students. The business has been owned and operated by Mesung Lee and her husband Sangwon Lee since 1986, and they prefer to keep the tradition of catering to East Lansing and not the university, said Mesung Lee.

“Most of our clients are actually local residents and not students,” said Mesung Lee. “I’d say it is 60 percent East Lansing and Okemos residents and 40 percent students.”

“There were only two owners before us and they all had a lot of local customers,” said Mesung Lee. “We don’t want to change the tradition, we try to keep up the quality in an old, traditional way.”

While it is evident that many businesses in East Lansing lose business when classes are not in session, not all businesses in the are impacted so greatly.

An economics professor at Michigan State University, Charles Ballard, said that a lot of what businesses are reporting is expected in a college town, however not all businesses in East Lansing cater to students.

“Some businesses’ activities are not dependent upon the student trade,” said Ballard. “For example high end restaurants don’t have a whole lot of students going there.”

“Students who don’t have transportation are likely only going to places they can walk to or that are along the bus lines,” said Ballard.

A driver for the CATA bus system, Charles Carson, has been driving buses for nearly 18 years. He said he has noticed that is almost totally dead in the summers due to students being gone.

“I drive the routes around campus often,” said Carson. “Merchants along Grand River Avenue in East Lansing must struggle.”

“Of course businesses seem to be affected the most, during the break they lose many customers and probably make less profit,” said Shikongo.

While it is evident that businesses are faced with certain challenges during school breaks, many have become accustomed to the changes and make adjustments as necessary.