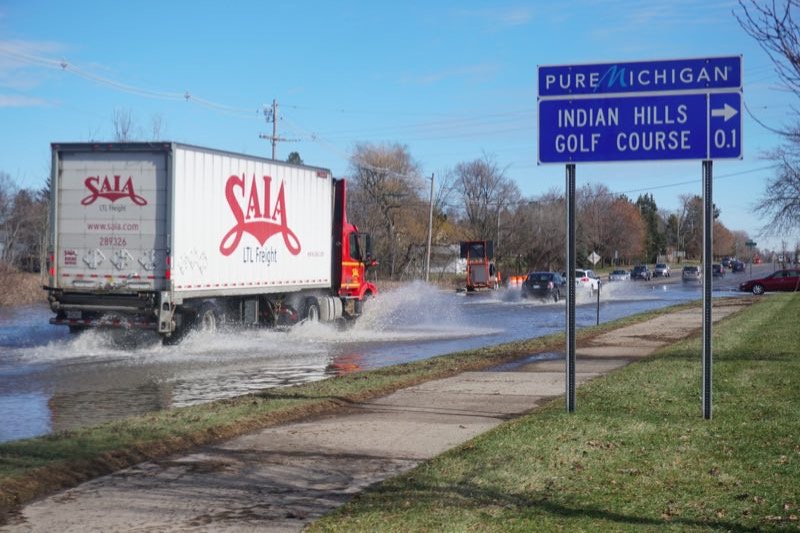 OKEMOS – on February 22, many roads in Ingham County were blocked by flooding. Because of snow and the heavy rain, there was a lot of water on the Grand River Avenue, and parts of that road and other roads were blocked off. The police erected a stop sign before the water, but many people still drove through the flood road. Some vehicles were trapped in the flood, and drivers was unable to continue the vehicle.

Harvey Leroy is an police officer of Meridian Township. He said, “we set up a sign for the road closed in the morning, but there are many drivers who don’t care (about) the sign. They felt that they could drive through the flood. This is unwise.”

Even if the police knew the flood was dangerous, he could do nothing. Leroy said, “We only watch the roadside, and I try to dissuade the driver from passing through the flood. I have no power to do anything else. I stop the drivers who drive the car on the crosswalk to pass the flood.”

The closure of the road also has a certain influence on the surrounding. Best Buy is a store on Grand River Avenue in Okemos. Cassandra Gras is Specialty Sales Manager of Best Buy. She said, “I think the government has done a good job, and they set up the sign in advance.” Ahna Weston is an Okemos Macy’s employee, she didn’t agree with Gras. Weston holds different views. She said, “the flood affected me very much. I used to take only 25 minutes to Macy’s, but because of the closure of the road, I took 40 minutes to Macy’s. The government does not work very well.

“In the first a few days of the flood, there was a lot of rain. I think the government should be on the alert at that time. I saw some vehicles trapped in the water, and no one was going to help them, and the government didn’t help them.”