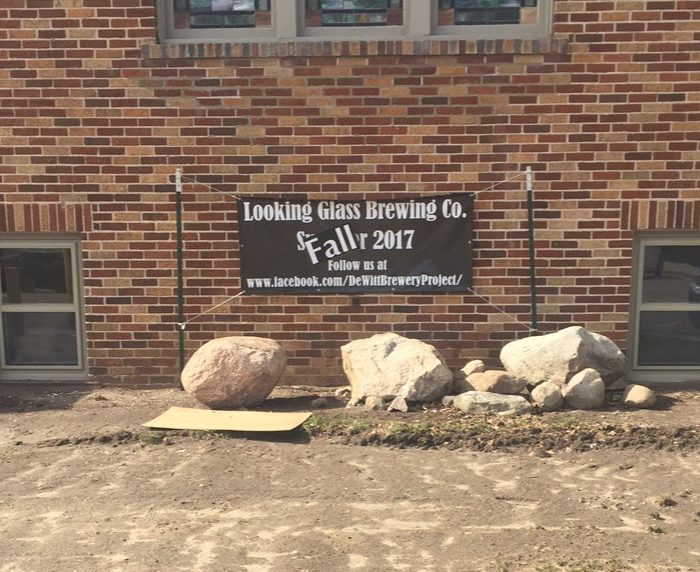 Looking Glass Brewery Co. in Dewitt Township is finally set to open its doors within the next month.

After experiencing some delays, co-owner of the brewery Joel Dillingham said there’s only a few steps left to go until they finally open their doors to the public.

“We’ve got to finish up our hiring, which we’ve got about six or seven more servers we’ve got to hire, and we’ve got to get our POS (point of sale) system up and get the menu created and basically train everyone on it,” said Dillingham. “So we’re hoping to have all that done in the next week and a half.” Originally set to open in the summer of 2017, and then in the fall of 2017, the brewery’s postponement was a result of equipment and construction delays.

“Anybody that’s opened a business will tell you you should add double whatever it is time wise you think you’re going to need, and that’s what you should plan on, and we unfortunately didn’t do that to start,” said Dillingham. “Everytime we get close to where we think we’re ready, then there’s something else that comes up that we weren’t expecting and then there’s another month delay.”

While he says it’s unfortunate these delays happened, Dillingham said that he, along with his fellow co-owners, his wife Shelly, and Lee and Jodi Streeter, want to make sure everything is right before they begin their soft opens which are scheduled for March 12-March 15.

Dillingham said the Looking Glass Brewery’s first soft open will be a chance for them to show their appreciation to those that have helped them get to this point.

“Our first event would be just to bring in some local businesses that they either helped us along the way, or the local government. The city of Dewitt’s been unbelievable,” said Dillingham.

With the brewery’s grand opening approaching, the anticipation has prospective customers more excited than ever before.

Donivan Wells, a Dewitt resident, said that while the delay is killing him, he’s looking forward to having local craft beer.

“I’m planning to do my part to support the brewery starting on day one,” said Wells. “I live close to downtown Dewitt and we walk by the brewery often.  I stop in every now and then to get an update on progress.  The owners are awesome and are always glad to show us around when we stop in.  Because of their willingness to welcome us in we feel like we are a part of the project and we feel like the brewery is already part of the community.”

Craig Smith, another Dewitt resident, said he’s understanding and supportive of the process the owners are going through to get the brewery open.

“It’s obviously going to happen, and it’s also obvious that they are working hard to make it the best it can be,” said Smith. “ It will be worth the wait, I am certain.”

With all the anticipation surrounding the brewery right now, Dillingham said he expects a big crowd when it first opens.

“We don’t know how long that’s going to last, and then it’ll get back to the normal, when everybody’s been here once or twice and then it’ll kind of be your normal crowd, that happens to everybody,” said Dillingham. “For us, we always gotta strive to continually find people that haven’t been here and find a way to reach them and get them to stop by and check us out.”

Dillingham said he hopes Looking Glass Brewery Company will become a part of the community and maintain a high level of service, great tasting beverages and food.

“As we become more successful, we look to give back in that way and so really driving community first, family first,” said Dillingham. “That’s something that we plan to take outside of our building and take that to the community and help where we can.”