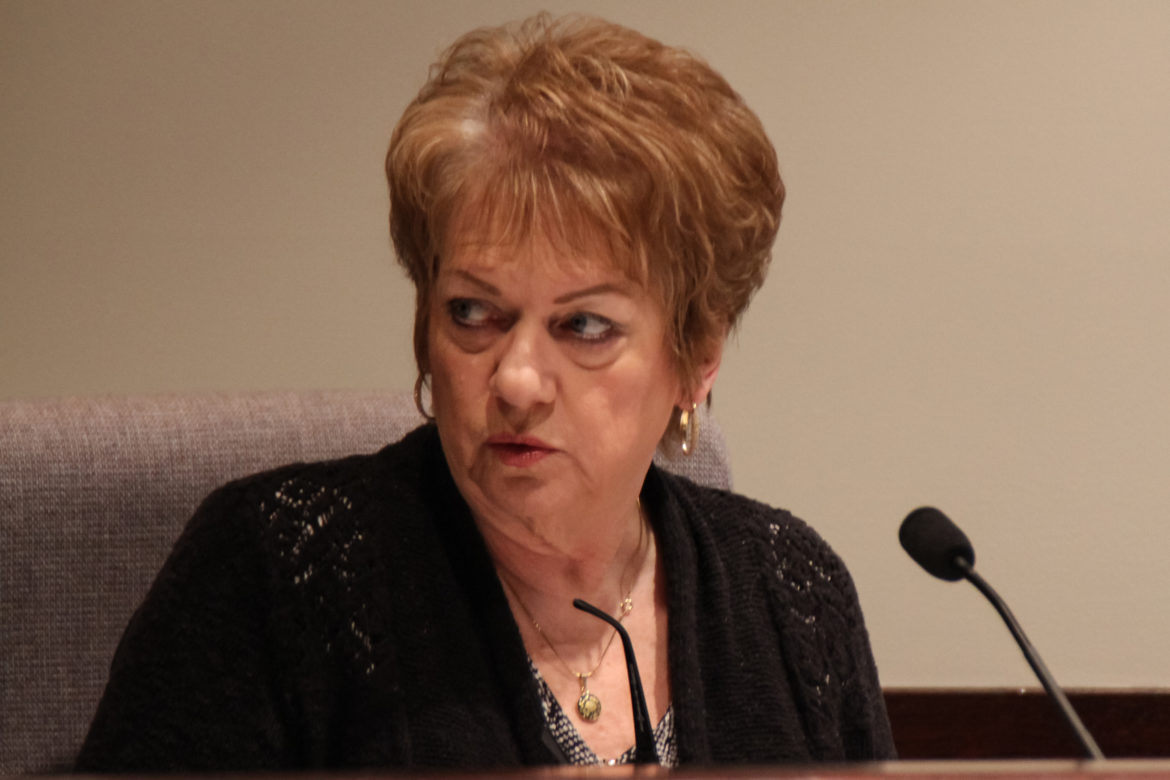 DeWitt Charter Township Clerk Diane Mosier discusses with the township board of trustees during a meeting on February 12, 2018. Photo by Ben Clemens.

As Diane Mosier heads into her 29th year as DeWitt Charter Township clerk, she says it’s the people that keep her coming back.

“I love the community, I’ve lived here my whole life, I was born here, I never left,” said Mosier. “I love serving the people here, it’s a great community, the staff is fabulous, and it’s never dull, there’s always someway you can help someone.”

She is currently the longest serving elected official in the township.

Mosier got started in civil service at the township in 1990 when she was appointed as clerk and then was elected to the position during the same year. She’s held the role ever since. DeWitt Charter Township Clerk Diane Mosier discusses with the township board of trustees during a meeting on February 12, 2018. Photo by Ben Clemens.

“It really is a public service job,” she said. “There are opportunities where I really can help people.”

She said she always enjoyed being active and enjoyed the challenges in helping people in a leadership role.

“Diane’s passion for doing the right thing is not only admirable and really parallel to her personality and her character,” said Township Supervisor Rick Galardi. “But even more than that, it’s really a component of the job that most people discount.”

Since she began, only seven U.S. senators and 24 members of the House of Representatives are still holding their office.

Some of the clerk’s position responsibilities include running all elections in the DeWitt Charter Township, being the official record keeper for the township, handling general accounting, voting on the board of trustees and preparing board agendas and minutes, per the township website.

The elections are a big part of what she does.

“I didn’t know anything about the election process and how to go about doing this, I did talk with Diane,” said David Fedewa, a member of the board of trustees who sought out Mosier for assistance prior to running. “She very carefully laid out the steps for me in what is necessary to file and collect nominating petitions and run for office.”

“I did get to know Diane,” said board trustee David Seeger, who knew of Mosier prior to becoming a trustee for election issues. “She was our clerk, when it came to getting voter registration issues taken care of, I dealt with her a little bit. It was always good, done right the first time.”

Yet, there are still some challenges to the job.

“When you hold an elected position, it’s often difficult for voters to understand that you’re elected to serve the community,” Mosier said. “Sometimes that doesn’t mean what’s best for an individual. So, it’s hard to find that balance where you can be honest and serve your community and still try to help others, help individuals, but that’s always a challenge.”

Another challenge for Mosier, 67, comes with the physical demands the job requires.

“This job was a lot easier when I was 40,” she said. “It’s a physically demanding job sometimes, and when you’re running elections, and you’re working 24-straight hours sometimes, that’s very difficult for an older person like myself. Elections are challenging, and I’m feeling like I’m too old to have the physical stamina to work those kinds of hours.”

She said she is looking to retire.

A recent movement seen by the public and some recent election candidates has been the disdain for career politicians, Mosier said she understands what they’re saying, but maintains she’s more accountable.

“I’m a front-line person, and people can walk into my office every single day and they do,” said Mossier. “If I’m not here doing the job, people know.”

“She takes that role of making sure that [the board is] doing things correctly, legally very, very seriously,” Galardi said. “She does a fantastic job of it. I will always be a better professional and public servant for having spent these years with Diane Mosier.” Being involved in the township for as long as she has, Mosier has been tabbed as the township historian, with her long-term knowledge described as “immeasurable” by Seeger, and that she “continues to deliver,” he said.

“She’s been here long enough and she’s so committed to everything that goes on here that she knows everybody and everything,” said Fedewa. “She’s a walking encyclopedia of DeWitt Township.”

“We term that asset of hers as institutional memory,” Galardi said. “And in a government like this, that’s very important.”