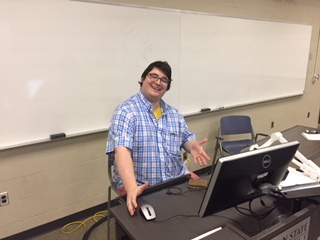 On the second episode of “Talking with Teachers,” I interviewed David Watson, MSU instructor and doctoral student in English.

Not only does Watson teach at MSU, he also instructs classes at Jackson College in Jackson, Mich. in a Prison Education Initiative program in which he teaches inmates at Cooper St. Correctional Facility in Jackson.

Watson’s English Literature classes focuses on more modern-day texts. I took one of his courses in the Spring 2017 semester, and the focus was on Batman and Superman. Now while many would wonder how that can pass as a college course, one would be amazed at how much depth and history there is to those characters.

In the interview, Watson talks about how he got into teaching, what his courses can offer, and what it’s like teaching in a prison.

“You [the inmates] have to have gone through a series of steps that show you’re invested,” Watson said. The programs are highly competitive. You have a group of individuals who are working harder on your class than you’ll find at any other kind of institution. You [the teacher] have to bring your game up to a higher level because they are very focused on what you have to say and you can’t waste any of their time.”

For the full interview with Watson:

Jon Simon is an aspiring sports journalist with a concentration in broadcasting. Jon is a senior at Michigan State University and will be graduating in May, 2018. Jon has interned for WGR 550 AM in Buffalo, NY and does volunteer work for MSU's student radio station, WDBM 88.9 the IMPACT.