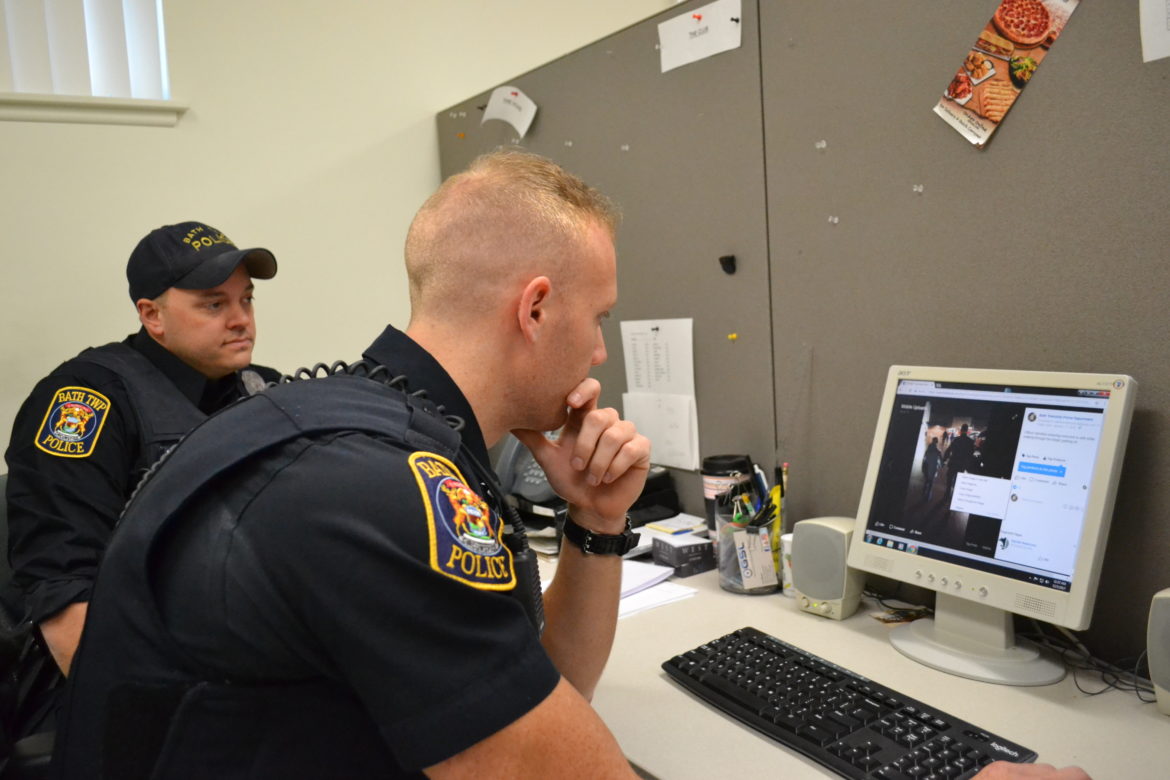 The days of beat cops patrolling the streets alone are long gone. Instead, increasingly police departments across the nation are using social media to connect with their community.

A 2016 survey conducted by the International Association of Chiefs of Police and the Urban Institute, found that 1 in 5 surveyed departments started using social media in the last five years. The survey also found community outreach and engagement and public relations were the primary reasons police are using social media. Officers Avery Lyon and Michael Lapham of the Bath Township Police Department said social media helps them interact with the community in ways that wouldn’t be possible without it.

“Social media is our generation’s beat cop,” said Lapham, who works with Lyon to manage the department’s social media presence. “I might not necessarily be walking through every neighborhood on each shift, but thanks to social media I can still have a presence in those neighborhoods even though it’s online.”

Their ability to have a presence online and in person helps them “gain followers and build a far stronger relationship” with their community, Lyon said.

More police departments are turning to social media because of its ability to spread messages quickly, directly address rumors and reach a wider audience.

“We can only have so many officers out on the road or boots on the ground who can talk to people individually,” said Sierra Medrano, the communication and digital strategist for the Michigan State University Police Department. “However, we can use social media as a mass messaging system to reach thousands of people.”

Medrano said this can be helpful when sending out university alerts.

“You look at people around campus and they’re usually on social media,” she said. “You don’t see too many people answering their phone if they don’t know the number, but they’ll see us on social media and share it. That snowball effect, that’s what really helps us get the message out.” 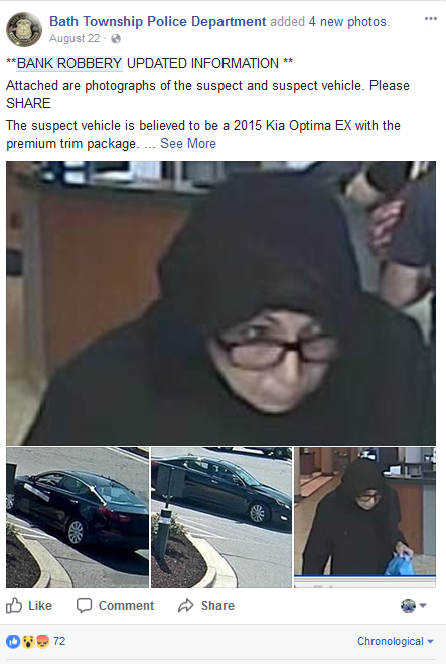 Bath Township police posted information about a local bank robby to Facebook to seek help from the community. 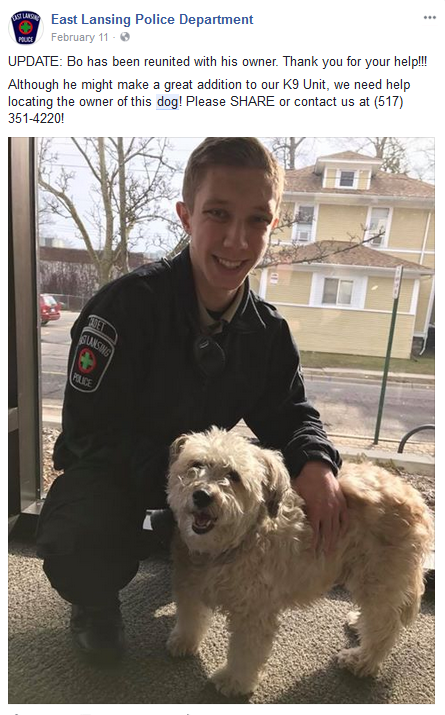 East Lansing police posted this photo of a found dog to Facebook, helping them identify its owner.

Social media allows police departments to interact with the community in a variety of ways. Departments can use their online presence to share safety tips and solicit crime information from the masses, like the Bath Township Police Department successfully did during its investigation into a bank robbery.

Social media also allows departments to use crowd sourcing strategies to help individual members of their community, like the East Lansing Police Department did when they were able to return Pk Van Voorhees’ dog, Bo, to her because of a message they posted on Facebook.

“When I found out they had him, it was such a relief. I can’t even describe it,” said Van Voorhees, an East Lansing resident.

Van Voorhees said that within an hour of Bo being gone, the police department was able to post on Facebook and gain enough information to return her dog back to her.

“The East Lansing community is a great little village and we have a wonderful police department,” she said. “I think some communities might have just called Ingham County Animal Shelter, but they kept him.” It’s this type of online interaction that helps departments humanize the officers behind the badge and allows them to build trustworthy relationships.

And if the IACP survey is an indication of the direction social media is moving within police departments, then its use for community policing and credibility building will only increase.

According to the survey, engaging with the community through social media (28 percent) and improving the use of social media overall (26 percent) are the top two concerns for departments moving forward.

“We need a strong community relationship and without (social media) you’re not going to be as successful as you can be,” Lyon said. “So incorporating social media into building that relationship is truly important.” Professional writer, journalist, and graphic designer pursuing a career in the entertainment magazine industry. I'm a creative mind and a music geek. Firm believer that an article a day will keep the ignorance away. MSU Spartan--Go Green!