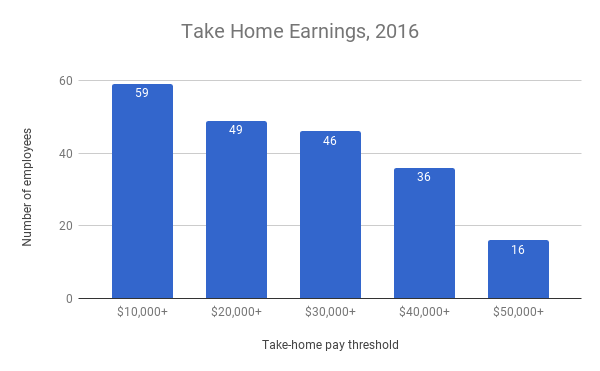 Since Ingham County Controller Tim Dolehanty said in September that the  county’s 911 dispatch center faces a staffing crisis, recruiting campaigns have yielded a handful of applicants and trainees. Dispatch center director Lance Langdon said the county is facing a problem that has begun to plague local governments across the nation.

“The staffing numbers have been up and down, but they’ve been more down than up,” Langdon said. “We’ve tried some different recruiting sites, we’ve found a few more common ones that the county didn’t hit. Those were mostly paid sites.”

According to the center’s records, the top third of workers by salary make an average of $23,636.09 in overtime pay, a number that makes up nearly 40 percent of their average gross pay. This may speak to turnover at the center, but Langdon sees nothing wrong with the numbers. In total, the county paid more than $1 million in overtime during 2016.

“The people that are really high (with overtime), they sign up for that,” Langdon said. “They volunteer for that. We have one guy who signs up for every opportunity he can. …Once we get our staffing numbers up and the people trained, those number of hours are going to start dropping.” Seventy-eight people worked at the center in 2016, including those who did not work the entire year. Langdon’s desired total is 68 positions, and when the center was consolidated with parts of neighboring counties in 2012, Langdon noted that combined employment went down about 14 or 15 people. Since then, Langdon said, it has been short on managers.

Paula Grech, a former dispatcher in Oakland County, knows the difficulty of dispatch work. “I only did it for a year, and it’s tough stuff,” Grech said. “Eventually, it just gets to be a little much.”

Langdon said he is still attempting to hire a staff services manager to work as a go-between for himself and hourly workers. He said the stress of job requirements for people who handle calls has been  overblown.

“The minimum qualifications for somebody that we have posted with a job is a high school education or GED, able to type at least 35 words per minute, and able to pass a background check,” Langdon said. “We then train them everything else that they need to know.”

However, there are some natural stressors in the Ingham dispatch center, which has population bases in Lansing and East Lansing.

“We have some people that don’t end up making it through training,” Langdon said. “Not everybody can hear information from people on the phones, process that, type it into the computer system, and get it to where we need to dispatch the calls. There are people that will get into this and say ‘this isn’t for me’.”

Throughout 2016, 19 employees that did not work long enough to earn $10,000 in take-home pay. That’s almost a quarter of the 78 total people that worked there last year. Langdon said the turnover was about normal and that the issue goes beyond one county dispatch center. “Public safety in general is having a hard time in finding people, police, fire, and dispatch centers,” Langdon said. “This is an issue across the country. It’s not just here locally.”

Ingham was recently passed by Oakland County to become the now-third most staffed center of its kind in the state, behind Oakland and Detroit’s Wayne County. Centers in smaller areas do not need as many hands on deck, which accounts for lower turnover among hourly workers.

Whether an increase in staffing will end up solving the long-term deficit of available staffers is still up in the air. There are efforts to recruit throughout the county, but some have noted that the stigma surrounding a 911 center may be too much to handle.

“That’s one job I could definitely never do,” said Alex Cavelier, 32, a retail manager in East Lansing. “To potentially have someone else’s lives in your hands, that would be a huge amount of stress for me.”

For now, Ingham will move forward with the trainees it has, and hope that they complete the six-month or year-long training courses to enter the center workforce. If not, Langdon will continue to get creative.

“We had a mobile billboard over Homecoming weekend. It had a big ad that said ‘911, we’re hiring’.”