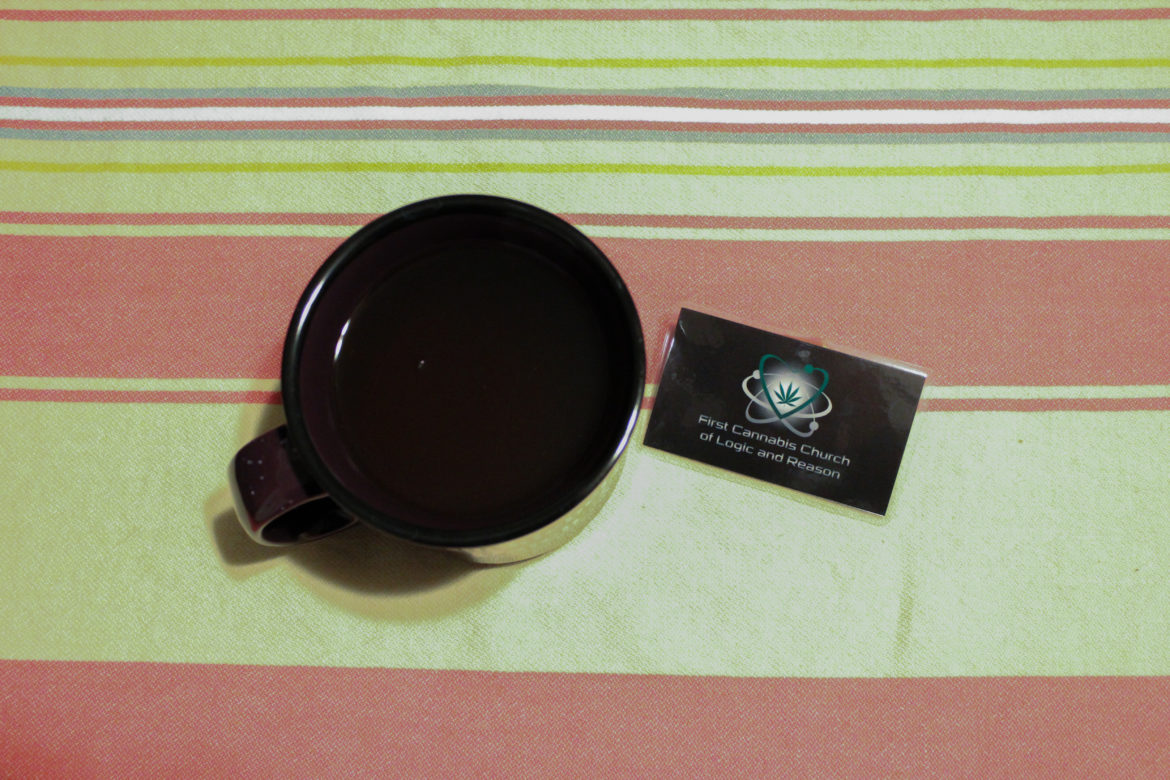 A portrait of a First Cannabis Church of Logic and Reason card next to a cup of coffee, part of the church’s pay-it-forward campaign to fight stigma against marijuana users.

Listen to this story as an audio feature.

Rev. Jeremy Hall led services every month until things went up in smoke in September. New legislation brought confusion and concern to his parishioners, and continuing services could put everyone in legal trouble.

Hall is the leader of the First Cannabis Church of Logic and Reason in Lansing, Mich. The church that views the drug spiritually but is viewed with uncertainty by city officials — that’s where Hall’s worries began.

The First Cannabis Church joins others of its kind across the country, each with its status under the watchful eye of local government. In states like Colorado where recreational marijuana is legalized, the International Church of Cannabis was protected by the state’s House of Representatives against religious restriction. Or in Indiana, where the First Church of Cannabis was granted tax-exempt status but rests in an area where marijuana is prohibited. Back in Lansing, a new ordinance has put local dispensaries and the church at risk.

Approved by the city council in September, the ordinance will cut down the number of dispensaries in city limits to 25, an estimated drop from 50 businesses, according to Hall and Lansing State Journal. Dispensaries wishing to stay open have until December 15 to submit an application to the city for review of its history and economic impact. The city then chooses 20 dispensaries during the first round and five more in a second round.

One of the new zoning regulations prohibits dispensaries from being within 500 feet of a church. Though the First Cannabis Church was not able to secure federal non-profit status, it is registered as one in Michigan. Still, it puts Hall and his members in a tricky situation. At services, which averaged near 20 attendees before suspension, marijuana would be distributed to those with medicinal cards.

Having that risk in mind, Hall wondered: How can they stay 500 feet from themselves, a place that acts loosely as both a church and a dispensary?

“It’s really become almost like a battlefield,” Hall said, who added future events under the church’s name will have to be held secretly, if at all.

City officials did not respond to a request for comment on the Cannabis Church’s concerns.

The trouble comes just over a year since the church opened in July 2016 – the only known one of its kind in Michigan. Not securing federal recognition and fearing the safety of their members brought gatherings to a halt.

Before the Cannabis Church suspended services in September, Rev. Hall held them once a month in south Lansing, most recently at Inner Ascended Masters Ministry. Over the course of two hours, the reverend would discuss a topic after a short potluck, break into small groups and hand out “religious material” to medicinal card-carrying members.

And by religious material, Hall meant cannabis. “We’d give out a pre-rolled cannabis, cigarette, joint – whatever you want to call it nowadays.”

The church takes surplus donations of marijuana, providing the drug to parishioners who can’t afford it regularly. Hall says for some, it’s the only dose they get each month. And those who can afford to do so will donate money to cover future costs of sharing the religious material.

A separate area is reserved for people ingesting or smoking the drug, so children and people who do not partake in marijuana are not affected.

Services were also broadcasted on Facebook Live by Jason Durham, one of the founders who used his indie filmmaker background as the church’s videographer. Exercising caution, Durham would always ask for permission from anyone who would appear in the video, though he doesn’t recall more than two people ever asking to be hidden.

Beyond the services, parishioners are also part of the church’s “Pay It Forward” program. Parishioners carry cards that include a message about the church’s mission. After performing a random act of kindness – like buying a cup of coffee for a stranger, Hall suggests – a card is handed out to fight the stigma against marijuana users. Then, ideally, the recipient will also pay it forward and spread the message.

“It does two things,” Hall said. “It multiplies the good deeds that you do, but it also lets people know that cannabis users are good people … you start changing public perception of who we are as cannabis users.”

The cards have even made it as far as Afghanistan, where U.S. troops received a care package and later sent Hall a photo of the accompanying card.

The back of a First Cannabis Church card details the mission of the organization’s pay-it-forward campaign.

Even with no more services, the church has no plans to give up on one of its signature events: “Cannabis Saves Christmas.” Last year, the public donated approximately $5,000 in toys to the church to give away to families in need.

This year, Durham said he expects the church to collect and donate $2,000 to $5,000 in toys. When the gifts are handed out alongside other goodies like hot chocolate, he hopes to be viewed differently.

“We don’t want the ‘stoner’ stigma,” Durham added. “But if [people] are gonna look at us like that, then they’re gonna see us doing all these positive things at the same time.”

One of Durham’s favorite sermons was about how the reverend had a treasured collection of “Magic: The Gathering” cards, of the popular trading card game, stored in his basement. The cards were valuable – and Hall knew it – which is why they were kept away from the public, away from where others could appreciate it.

“One day, his house flooded,” Durham said. “He lost all that. But he also lost everything else that didn’t have value, and he was forced to start over.”

The cards were never played,­­ sold, donated or put to any other use besides as a basement keepsake. Despite being removed from what is expected of a traditional religious sermon, it still served as a metaphor for rejecting materialism: Take your replaceable belongings and give it away to someone who will derive joy from it.

“Instead of holding on to just the value of what you own,” Durham said, “You start to change your conception of happiness to doing things for other people.”

Holding this principle close to what the church stands for, Hall is determined to not give up on keeping the First Cannabis Church of Logic and Reason alive in Lansing. If marijuana legalization makes it on the 2018 ballot in Michigan, services could resume as early as January. Paired with watching how the city ordinance affects dispensaries, the two benchmarks would provide the confidence needed to operate the church legally as it was before.

“The biggest thing is that we don’t want to stop being a community outreach organization,” Hall said. “We want to be the people still in the community, changing the face of cannabis.”