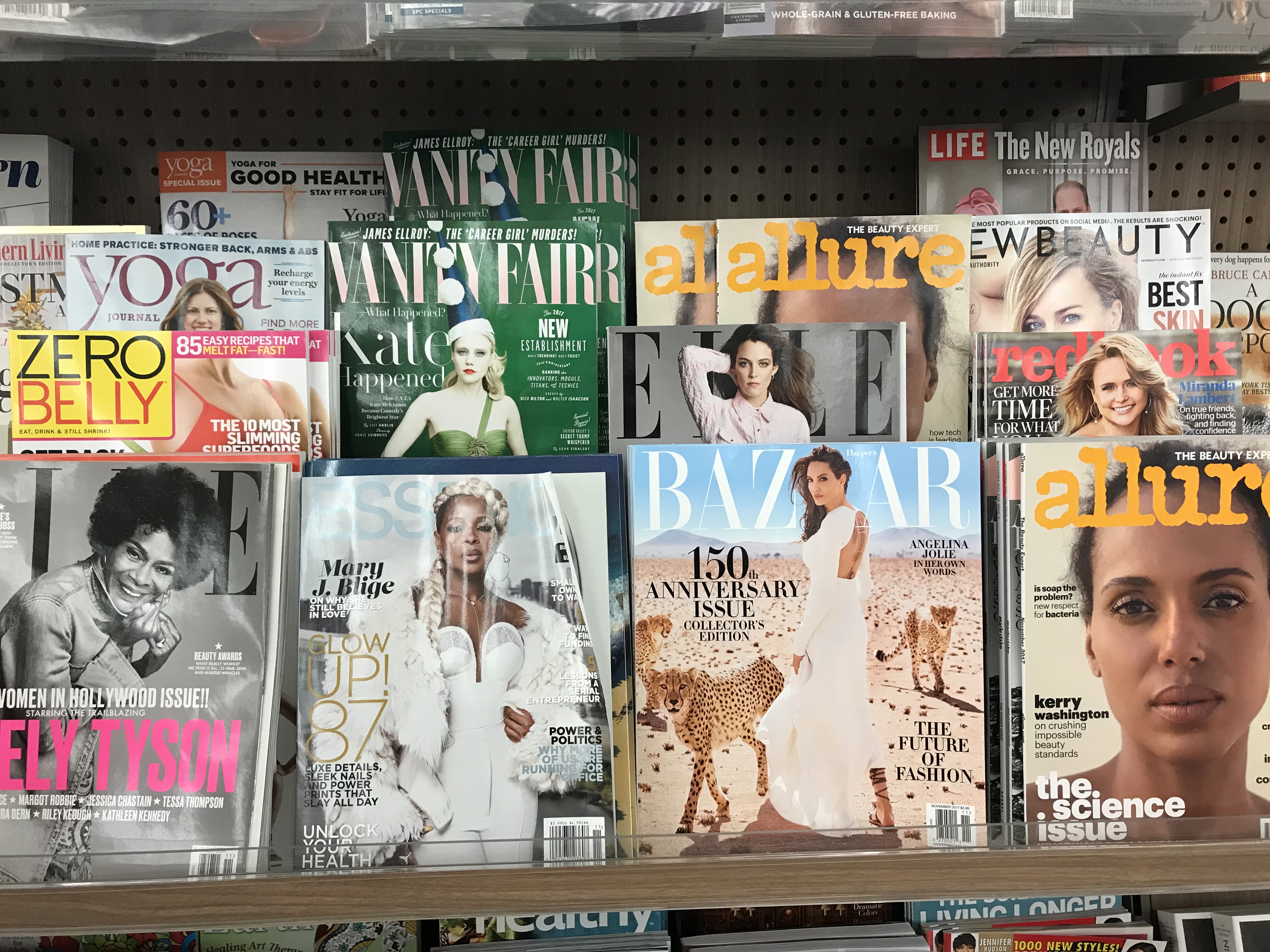 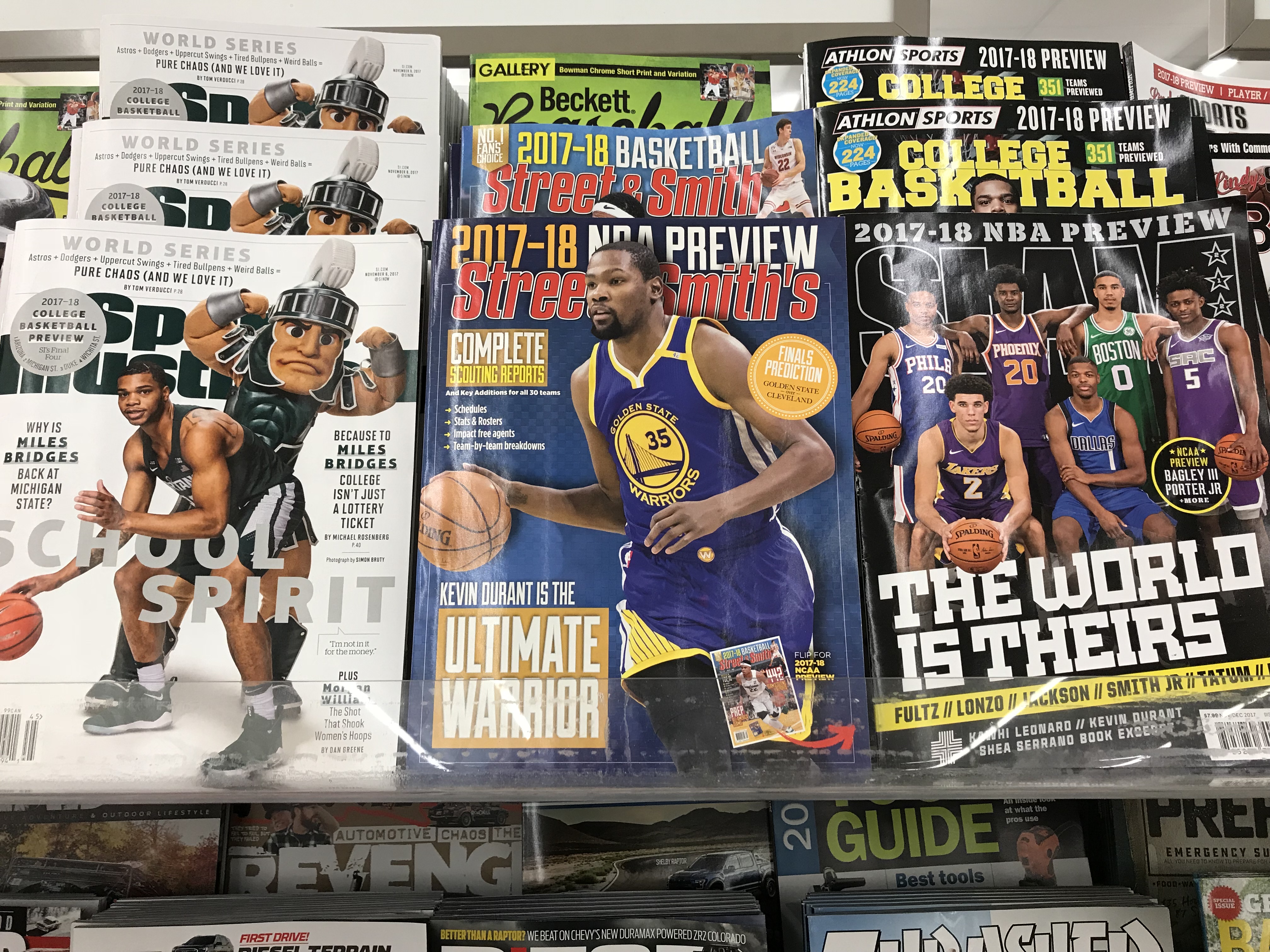 Covers of three different magazines, featuring all male dominance and no women. 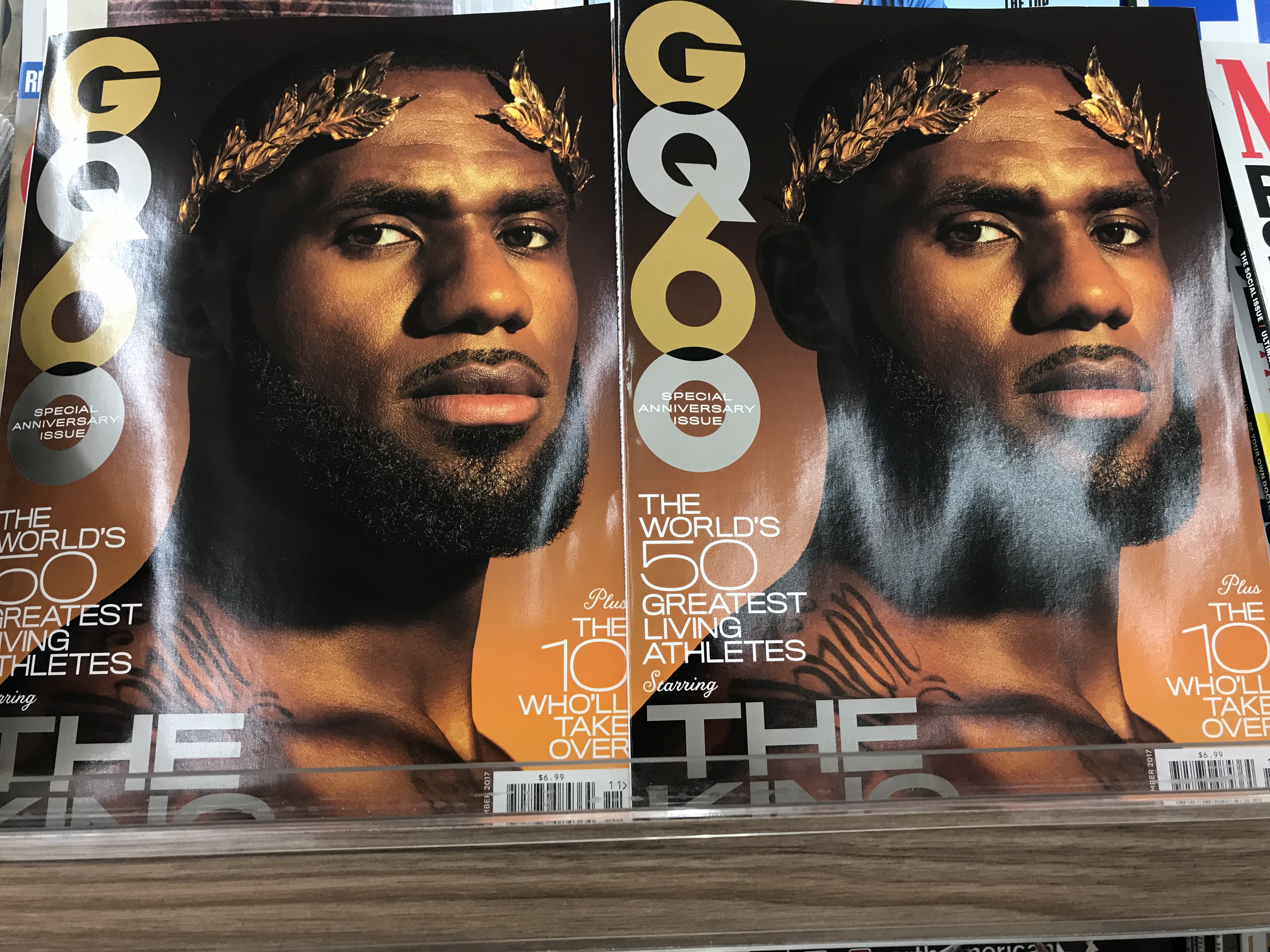 LeBron James on a GQ magazine cover, featuring the type of covers for a male magazine.

Michigan State University track and field athlete Denise Spann focuses a lot of time and energy on her body.

That’s because she’s focused on trying to perform her best on the track, said Spann, a junior from Coconut Creek, Florida. Muscle structure and body weight can play a significant role in how an athlete performs.

But, Spann said, media portrayals of female athletes seem too focused almost entirely on how women look and not on how athletic they are.

“Most of the time they just want to see a beautiful girl play a sport, because there’s a stigma in certain sports that you can’t be beautiful and be one of the best,” Spann said. “I think that the focus should be on the skill, because female athletes do work so hard to be good at their craft, only for it be overshadowed by the way they look, or how their body looks.”

Michigan State kinesiology professor Dan Gould studies sports psychology for all age levels of athletes and said having insecurities about your body can lead to increased anxiety and worry.

And that can impact performance for athletes in their sports and in their lives.

“There are some studies that actually talk about a topic called social physique anxiety, which is anxiety caused by people’s perception of their body,” he said. “The higher you perceive your body as inadequate, the more anxiety you’d have, especially in situations if you went to a rec center and other people watched you worked out.” 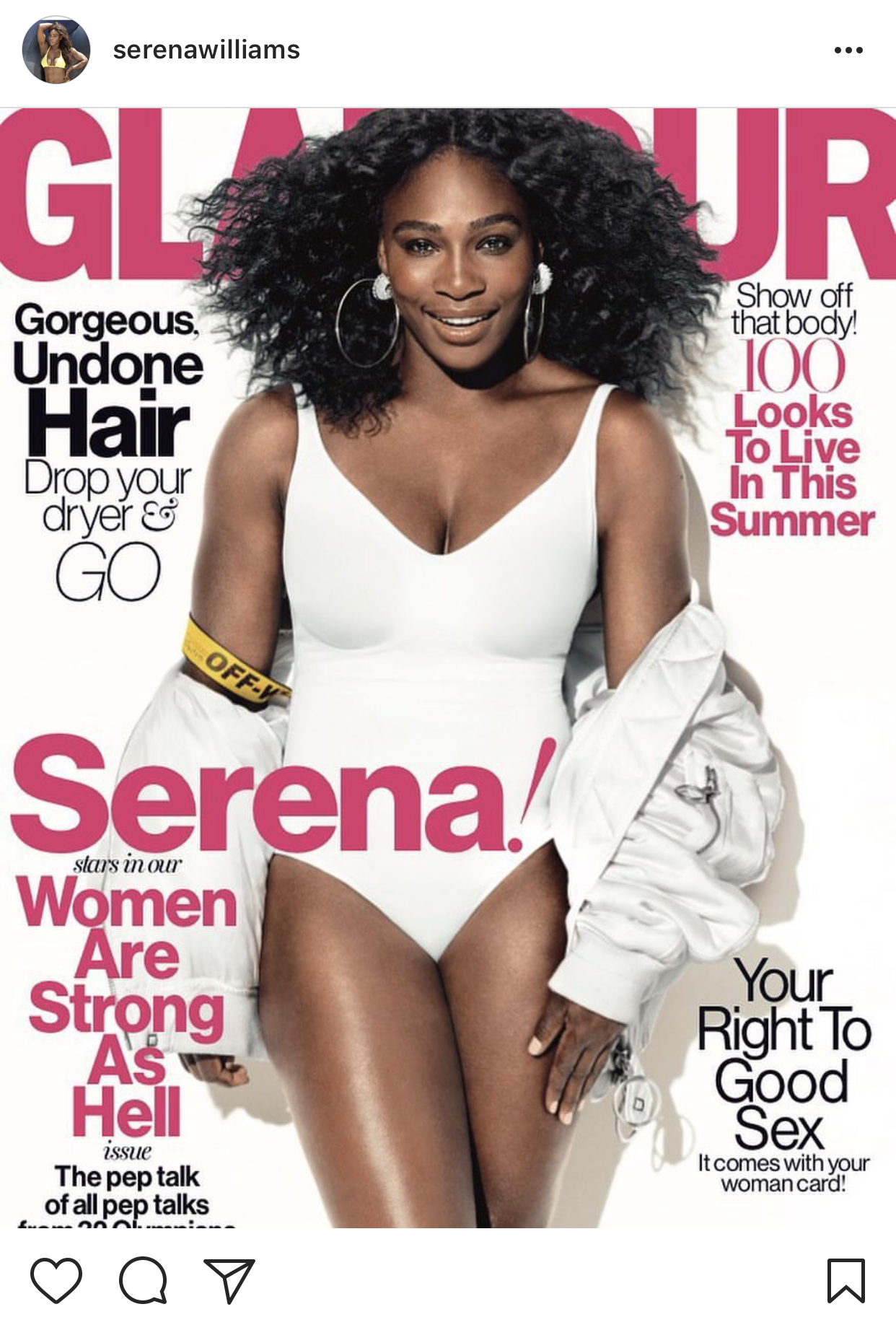 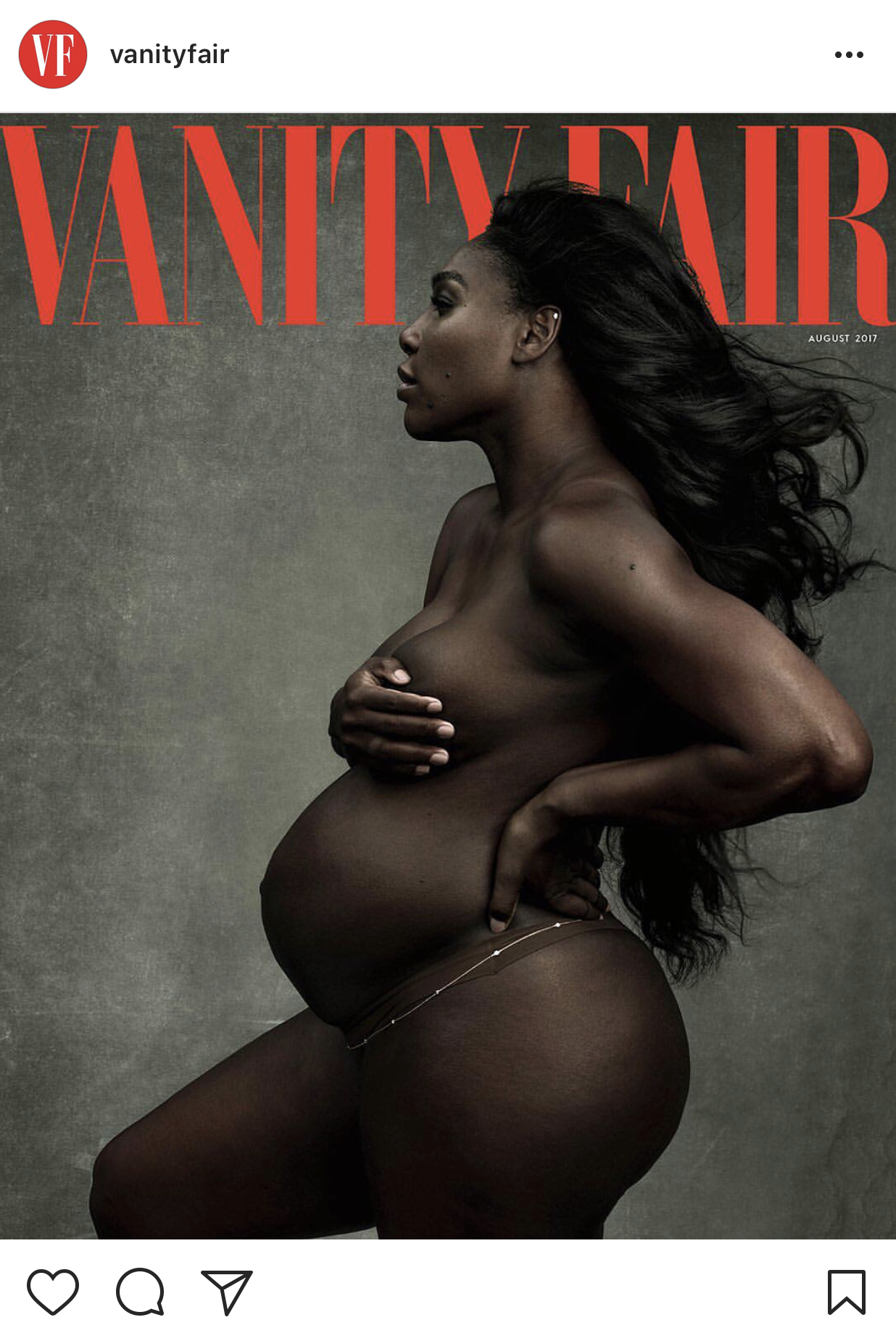 Tennis star Serena Williams has made headlines for her athleticism and her appearance. The 36-year-old holds more Grand Slam titles in singles, doubles and mixed doubles combined than any other active player.

During a TIME interview that profiled groundbreaking women, Williams said, “It isn’t always easy to be on this stage and play in a tournament and have someone make a comment about your body.”

Williams is 5-foot-9 and has notable muscular arms, calves and legs.

“She’s still had moments, where even she has talked about, like ‘Oh my gosh, I don’t look like other people’,” said Michigan State journalism professor Joanne Gerstner, who also is a sports reporter. “Do I embrace it or have that moment like, wow, I wished I looked different?”

Her dominance in tennis is too often overshadowed by her body, Spann said.

“I find it funny that people always come for Serena, when she’s always been muscular since she was younger,” Spann said. “It’s because she’s so dominate in the sport, that it’s a problem for people.”

“A lot of western society and sociologists have looked at how women are portrayed in the media and many feel that a contributing factor to anxiety over body image are unrealistic expectations that everyone is supposed to look a certain way,” Gould said.

A survey conducted by the BT sport website looked into body image insecurities in women’s sports. The survey revealed 80 percent of female athletes feel pressure to conform to a certain look and body type. Within the same survey, 67 percent said they feared the media valued their appearance over their sporting achievements.

Gerstner said the media holds female athletes to a different standard of how their body should look from male athletes.

That difference was showcased during a presentation from the University of Minnesota’s Center for Women in Sports that looked at magazine covers, Gerstner said. Of the women who are on Sports Illustrated cover, most are not portrayed in their athletic uniforms. For example, Serena Williams would be in an evening gown. Meanwhile, LeBron James would be in his uniform dunking or sweating.

“Typically, women are A), not on the cover or B), when they are they’re beautiful or made as not in the act of being an athlete,” she said. “That’s a very clear message the media sends.”

Training for the right body type

Spann said her track coaches encourage a certain body type for team members to be the most successful in their events and reach their full potential.

“It’s never on the lines of body shaming, but being a certain size and weight for certain running events makes it easier to run better and get where you want to go,” Spann said.

The pressure to maintain a specific body type mainly comes from how successful she wants to be in her events.

“I don’t think there’s a problem with pursuing a certain body type, as long as you’re happy in the skin you’re in and it’s in a healthy way,” Spann said.

She said she focuses a lot of energy on her diet and how much training she does.

“Being a female athlete, we’re in the weight room lifting just as much as the guys, and if you don’t lift heavy enough you might not be as successful in running,” she said.

During the track season, Spann tries to eat as healthy as possible, do extra running and do abs on her own.

“Being an athlete, I can be very critical of how my body looks compared to teammates or other athletes I know,” she said.