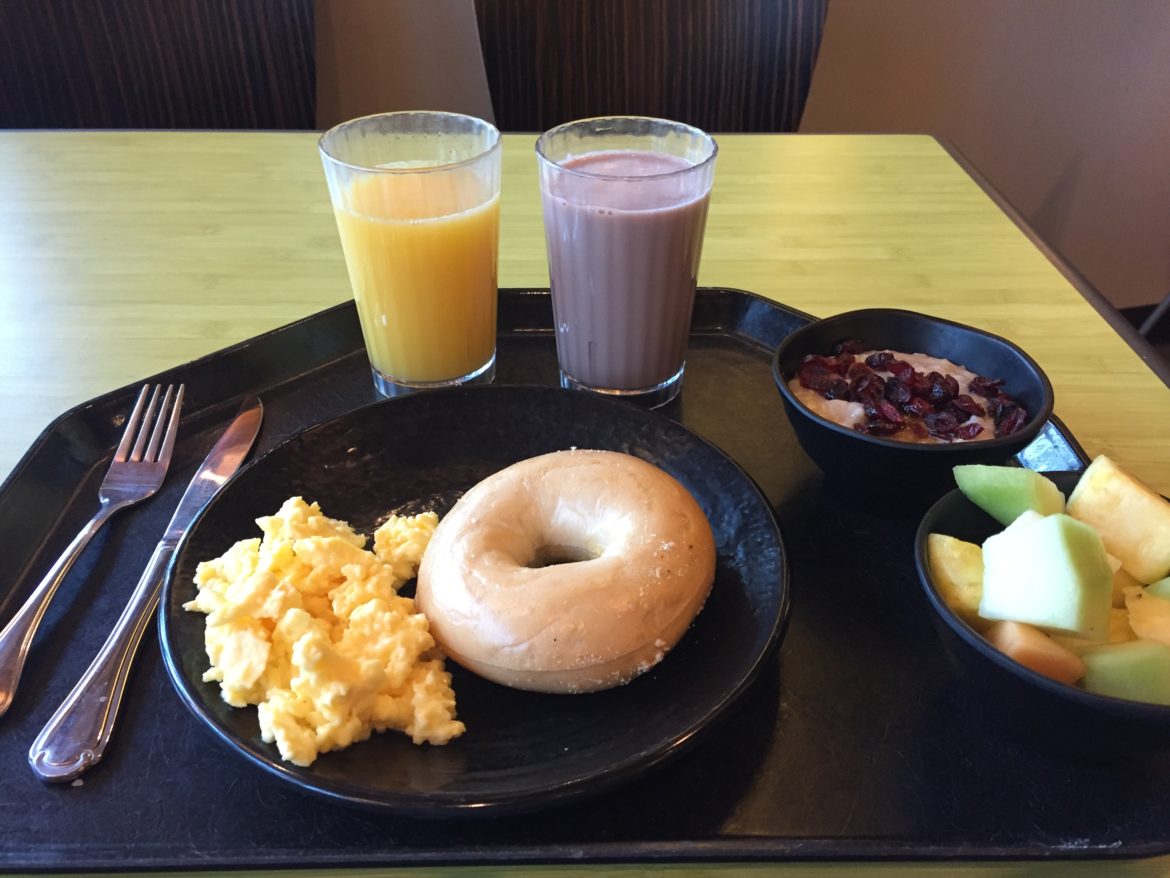 A basic breakfast for football players like Hillsdale's Drew Rubick. 240 pounds while maintaining his footwork and speed. Rubick is given unlimited access to the cafeteria and $20 a day for snacks on his quest to gain weight.

It doesn’t matter if you’re a professional athlete, a movie star or your average Joe, for most people, dieting is a challenge. The dieting struggle is all too familiar for true freshmen Drew Rubick and Turner Ruby, who play football at Hillsdale College.

Rubick and Ruby dreamed of playing football in college and now that they finally are, they’ve realized that working hard doesn’t just mean in the weight room and on the field.

“It’s not an easy task,” Ruby said of the nutrition program. “The ‘process,’ as coach always says, ‘takes time.’”

For players on the Hillsdale Chargers football team, what they eat and how much is a big deal that can make or break their abilities on the field. That is why the team’s athletic trainer makes a personalized blue print for every player the first week of camp that establishes specific goals.

“(Everyone has the same) football meal plan, and everyone has to stay on it for at least three years,” Ruby said. “Most of the fourth and fifth years stay on it anyway.”

The Chargers’ nutrition program, created by Lynne Neukom and Patrick Gifford, focuses on short-term goals for players. Using the Vert System — a more in-depth Fitbit-like device — and a series of four physicals throughout the year, the coaching staff is able to optimize each player’s workout and dieting regiment.

Drew Coker, director of Spartan Performance and a nutrition specialist at Michigan State University, and his staff work closely with thousands of athletes every year. Similar to the Hillsdale program, Coker and his team sets short-term goals for their clients, which in turn help the athletes reach their end goal.

Meeting for a minimum of eight sessions, or two appointments a week for a month, Coker and his staff want their athletes to use to increase healthy life behaviors.

“From a training standpoint, I would say there is a lot of times athletes don’t do the best job of setting specific goals,” Coker said. “A lot of times, a lot of their goals are to make it to college and we try to get them more onto short-term goals, which will get them to that point where they can make it to that college team.”

As student-athletes like Rubick may know, the healthy life behaviors that trainers want him to follow aren’t as simple as they may seem. Coming in at 6-feet-3-inches and 207 pounds, tight end Rubick’s goal for the program has been to get to about 240 pounds while maintaining his footwork and speed.

Given unlimited access to the cafeteria and $20 a day for between- snacks, Rubick is expected to eat three meals and snacks per day at about 734 calories each. Finding time and room to eat the proper food starts to become difficult for players trying to bulk up.