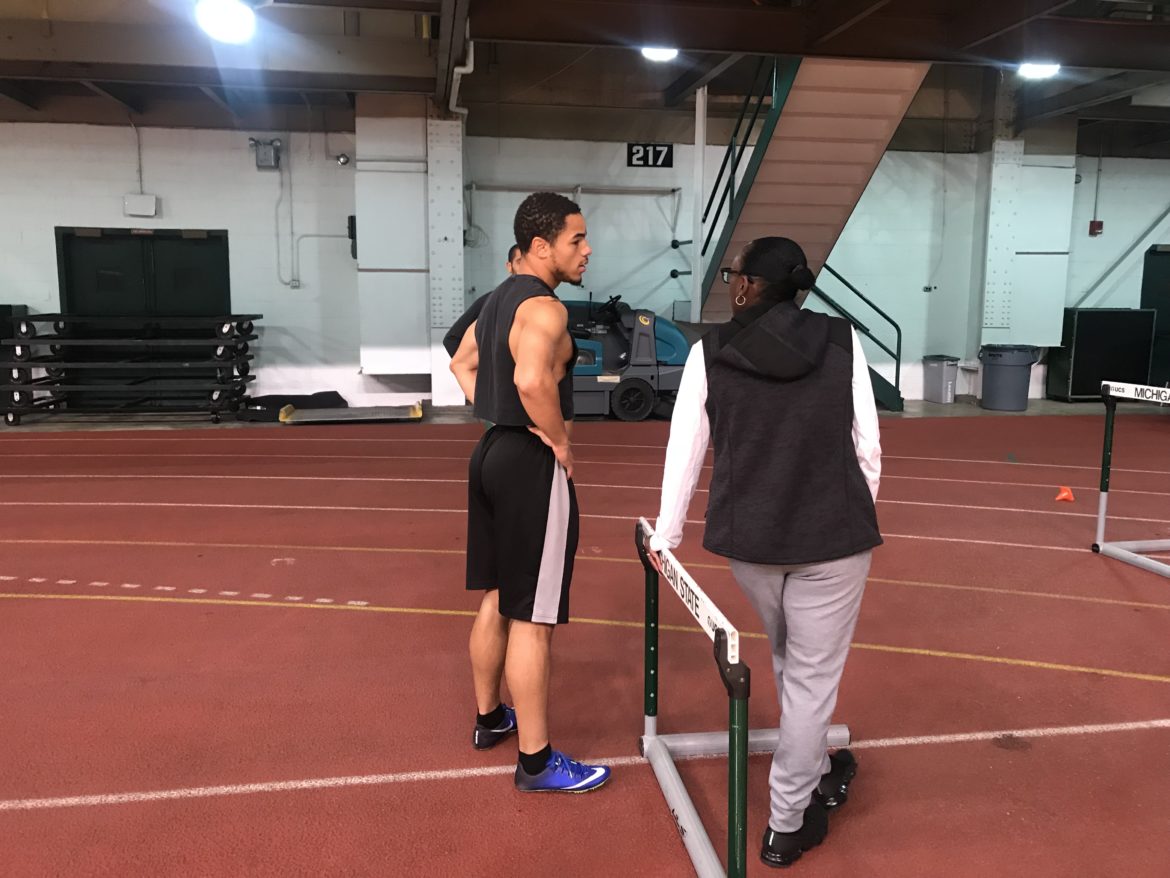 Coach Yolanda Johnson talking to a student-athlete about her hurdling form.

More than 60 percent of male basketball players at NCAA Division I programs are black. In football, nearly half of players are black.

A lack of diversity among coaching staffs can create issues for student-athletes and other coaches.

“I do think that having a black coach and being a black athlete makes being in the sport a lot easie, “said Denise Cayard-Spann, who is black and a junior who runs spring for Michigan State University’s track team. “It makes me very comfortable to know that there’s someone who’s been in my shoes personally and athletically.

“With the times of the world, I won’t worry about having to walk on eggshells about a topic. I find a lot more thing are less tense both athletically and personally. And I find my athletic abilities able to flourish real well in that environment too.”

Unlike some professional sports, the NCAA lacks a central rule to require its member colleges to hire minority coaches.

The NFL adopted the Rooney Rule in 2002 after the firing of two black NFL coaches. The Rooney rule named after Dan Rooney, the former owner of the Pittsburgh Steelers and former chairman of the league’s diversity committee. It requires teams to interview minority candidates for head coach and senior football operations jobs.

The NCAA doesn’t have a similar rule for college coaches, leaving the hiring process up to each college.

Sue Carter is a journalism professor at Michigan State University and the university’s faculty athletic representative. She’s a voice within the athletic department for the university’s academic faculty and also meets NCAA and Big Ten officials to discuss issued pertaining to the success of student-athletes.

She said a lack of diversity remains a significant problem.

“When the salaries for coaches in women’s programs were far less, there was greater diversity,” she said. “As the salaries rose, more men were attracted to coaching women and were hired.

“As to male sports and lack of diversity, I am concerned that there is a network that promotes primarily white coaches”.

Yolanda Johnson joined the track and field staff at Michigan State in fall 2016 and is the only black coach in the program. She is an assistant coach to sprints, hurdles and sprints relay.

Johnson said she think her race — and university officials’ desire to diversify the coaching staff — helped her during the hiring process.

“But because I got in the door for that reason is not going be the reason why I make a difference and move up,” she said. 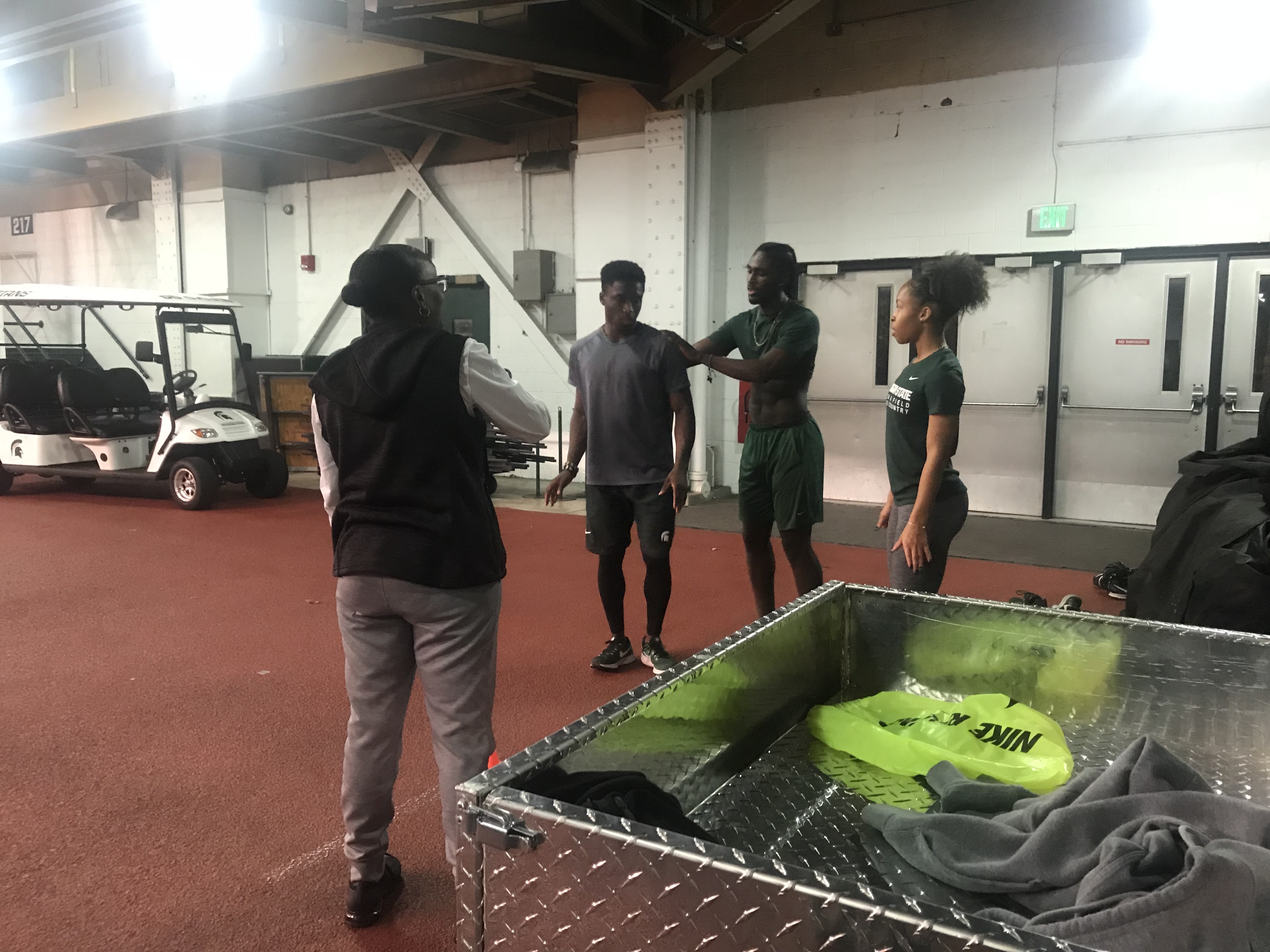 Coach Yolanda Johnson giving her runners instructions for their next run. 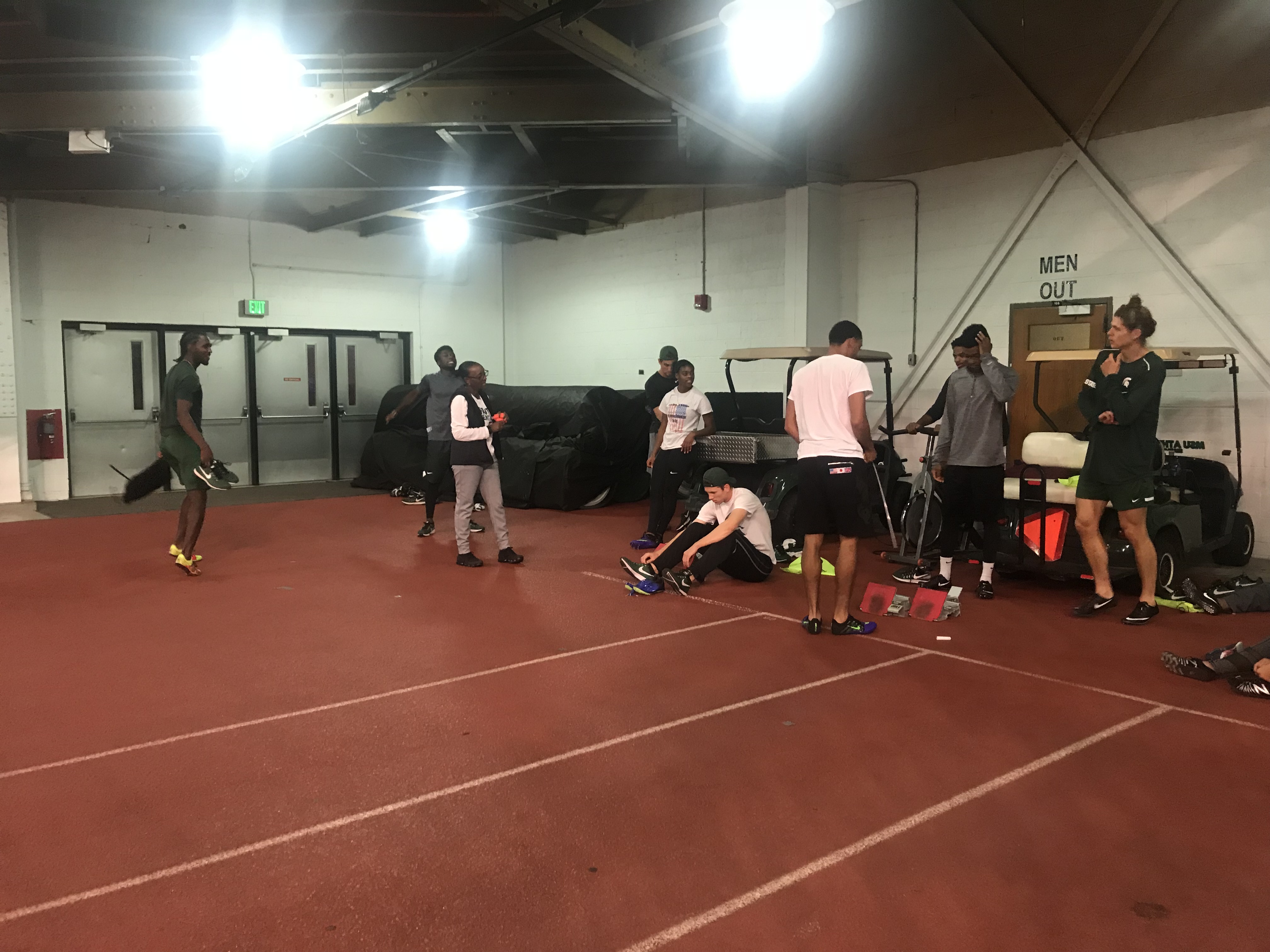 Coach Yolanda Johnson talking to her players during practice. 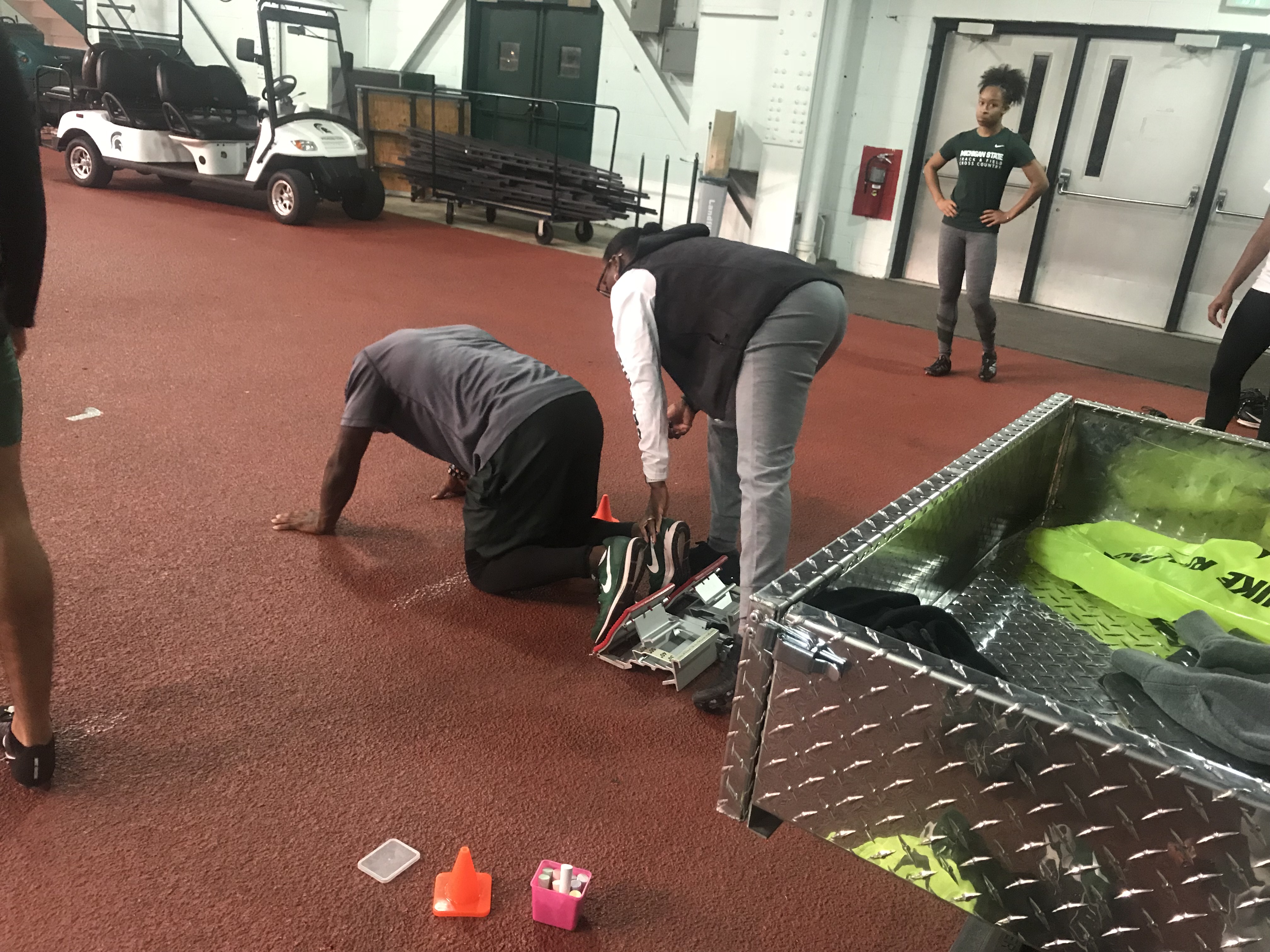 Coach Yolanda Johnson fixing the blocks for her runner.

Johnson said that she was hired Michigan State to help her student-athletes achieve their goals.

She grew up running track in Denver, Colorado, where the majority of her team was black. She said she’s noticed disparities in the racial makeup of athletes and coaches throughout her career. When she was a student running distance races, she said she often would only see two or three other athletes who looked like her. When she switched to running sprints, she said she saw more athletes of color.

Throughout her career running, she she said had all black coaches until she entered college.

“I attended the University of Colorado, where when I was in school there were maybe 120 blacks,” Johnson said. “It’s something that my mom experienced and I too experienced it.”

Johnson started her coaching career with encouragement from her coach at Colorado. When she started she realized that she was good at it and made a difference in people’s lives.

That, she said, is the key to getting past any hardships in her job.

“I touched one of my kids life and made theirs lives better and that at the end of the day is more important than all this other stuff going on,” she said.