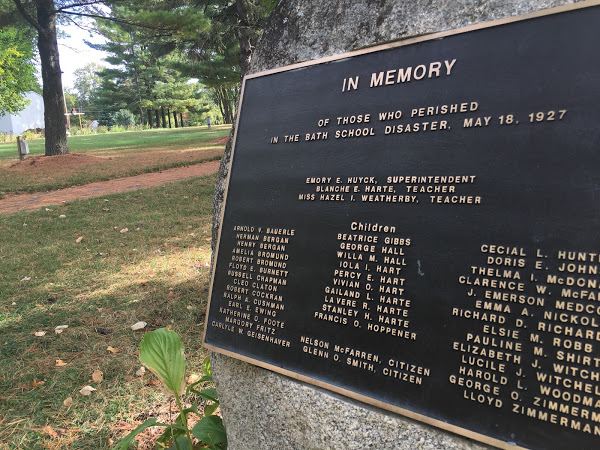 A plaque remembers those who perished in the Bath school bombing on May 18, 1927. The plaque, placed on a rock, is located in Bath, Michigan, at the site of the explosion.

Andrew Kehoe was upset about tax increases, potential foreclosure on his farm and a recent defeat for township clerk.

This would be May 18, 1927. The day that changed Bath Township forever.

Kehoe killed his wife, blew up his farm and detonated explosives at the Bath Consolidated School before claiming his own life in a separate explosion in the school’s parking lot. The remnants of what was left of the Bath Consolidated School in Bath, Michigan, after Andrew Kehoe placed dynamite in the school on May 18, 1927, taking the lives of 44 students, teachers and staff. The school was later completely demolished.

The events that took place on that day, just over 90 years ago, have set forth a feeling within the community that will never be changed.

“It’s the worst thing that’s ever happened, and I actually think it’s one of the largest disasters in (a) school that ever happened,” Andy Matthews, an employee at CVE Homes in Bath, said. “I think he killed the better half of 50 or 60 people.”

The tragedy in Bath is still, to this day, the worst American school massacre in history. The Virginia Tech shooting in 2007 claimed the second-most lives with 32.

The bombing has stuck with Bath’s residents forever, but for those outside of the community and the state, they may be totally unaware of this tragic incident.

“Not many people know about it, but if you’re from Bath, everybody knows about it,” Claire Dibert, an office assistant at Dave Fry Reality, said. “We have moments of silence every year.”

When Denise Wahrer began working at Bath Middle School, she didn’t know about the bombing, but she soon realized its impact on the community.

“I didn’t grow up here, so for me, a family member wasn’t involved in it or anything,” she said. “But there are a lot that have had family members involved. When I first moved here, I didn’t really know about it. It’s kind of a big deal.” The most updated Google Maps view of what remains at the site of the Bath Consolidated School bombing in Bath, Michigan. Andrew Kehoe placed dynamite inside the school, killing 44 on May 18, 1927.

Dibert, 21, has lived in Bath all of her life. For her, the bombing is engraved into her. Even though it happened long before her birth, Dilbert knows the complete background of the event.

“(Kehoe) lived on a farm, and he killed his wife and his kid and burned his farm to the ground,” she said. “So, while everyone is trying to put out the fire, he came up to the school and had loaded up his car with shrapnel. As people was escaping the blown up school building, everyone came to him because everyone knew him.”

“He was a maintenance worker there for a few months. Everyone came up to his truck, he lured the school principal over, and he blew up his truck and sent shrapnel into people who had just escaped the school bombing. I think there are two survivors still alive. It’s a huge thing that super engraved into the community.”

Dibert said that the schools in the area don’t take any threats relating to bombs or the harming of people lightly.

“I remember being 7 or 8, and I would spend my summers at the summer daycare, basically,” Dibert said. “The school has afterschool care and daycare during the summer, and someone had wrote on the playground at school that there was a bomb in the school. They had to shut everything down.

“Our school takes bomb threats seriously, even in high school. I was a junior in high school, and a drunk elementary parent called the elementary school voicemail saying he was going to blow it up, that he was going to bomb it. So, they shut everything down; they sent everybody home. We take that stuff seriously, whereas other schools are like ‘We’ll bring in the dogs. They’ll check.’”

The school has since been demolished, but the cupola remains on the tragic site, memorializing those that lost their lives. It is the only item from the explosion that remains there today.