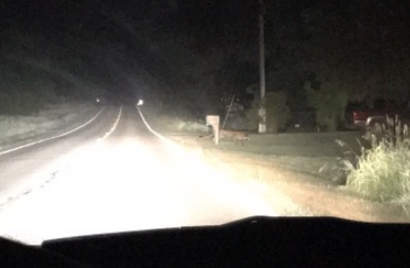 A photo submitted to the Michigan Department of Natural Resources which was used to confirm a cougar sighting in Bath Township. The cougar can be seen behind the mailbox. Photo courtesy of the DNR.

Bath Township made quite a splash in June when it became the site of a landmark occurrence.

The Michigan Department of Natural Resources, or DNR, confirmed a cougar sighting as legitimate, the first confirmed appearance of the big cat species in the Lower Peninsula in over a century.

“Cougars were native to Michigan, but they were totally eliminated from Michigan just because of fear and livestock depredations long ago,” DNR wildlife biologist Kevin Swanson said.

“We have no evidence of a breeding population, but we get these transients that come through mostly the Upper Peninsula from time to time.”

A Michigan press release with Swanson listed as a contact states the last time a wild cougar was taken in the state was in 1906.

There have been 37 confirmed cougar sightings in Michigan since 2008, 36 of which took place in the Upper Peninsula, according to data provided by Swanson.

This Lower Peninsula sighting is important for showing just how far cougars are able to travel through civilized areas and areas with high traffic volume, Swanson said.

“What’s significant about this confirmation is that it traveled such a long distance,” Swanson said.

Bath Parks & Recreation Director Rebecca Goodwin said the sighting did not come as a big surprise to the town, considering all the nearby wooded areas.

Bath resident Brian Secord, 16, said the sighting didn’t create much buzz at his school, but he was curious as to how it transpired.

“I don’t even think there is cougars in Michigan,” Secord said.

“I was like, ‘where did the cougar come from?’ That was my first thought.”

Turns out, likely from hundreds or over a thousand miles away in the Nebraska or the Dakotas. Swanson said cougars that make it to Michigan are typically young male “dispersers” looking for mates because the healthy populations in the west already have many males.

“They’re young cats looking for their own territory, basically, just as a black bear does, just as gray wolves do, except cats disperse much much farther,” Swanson said.

Some locals had fun with the sighting, including a schoolteacher who started selling “There’s a cougar in my Bath!” T-shirts with her students for charity.

Though the mountain lion made news all across the state, it might not have made a big splash in Bath itself.

Barth said he heard some people talking about it, but it didn’t much impact the people around him.

“I doubt the cat is even in the area,” Swanson said. “They like their solitude, so they don’t want to be seen by people if there was one in the area.”

Swanson said the cats typically head back west after they don’t find a mate. Bath’s cougar could be hundreds of miles away by now.

“It’s just a very unique confirmation in the Lower Peninsula, so we’re just going to keep that in mind, keep plugging away here and see if there’s any other substantiated reports in the future,” Swanson said.

2 thoughts on “Cat in the Tub: How a cougar invaded Bath Township”