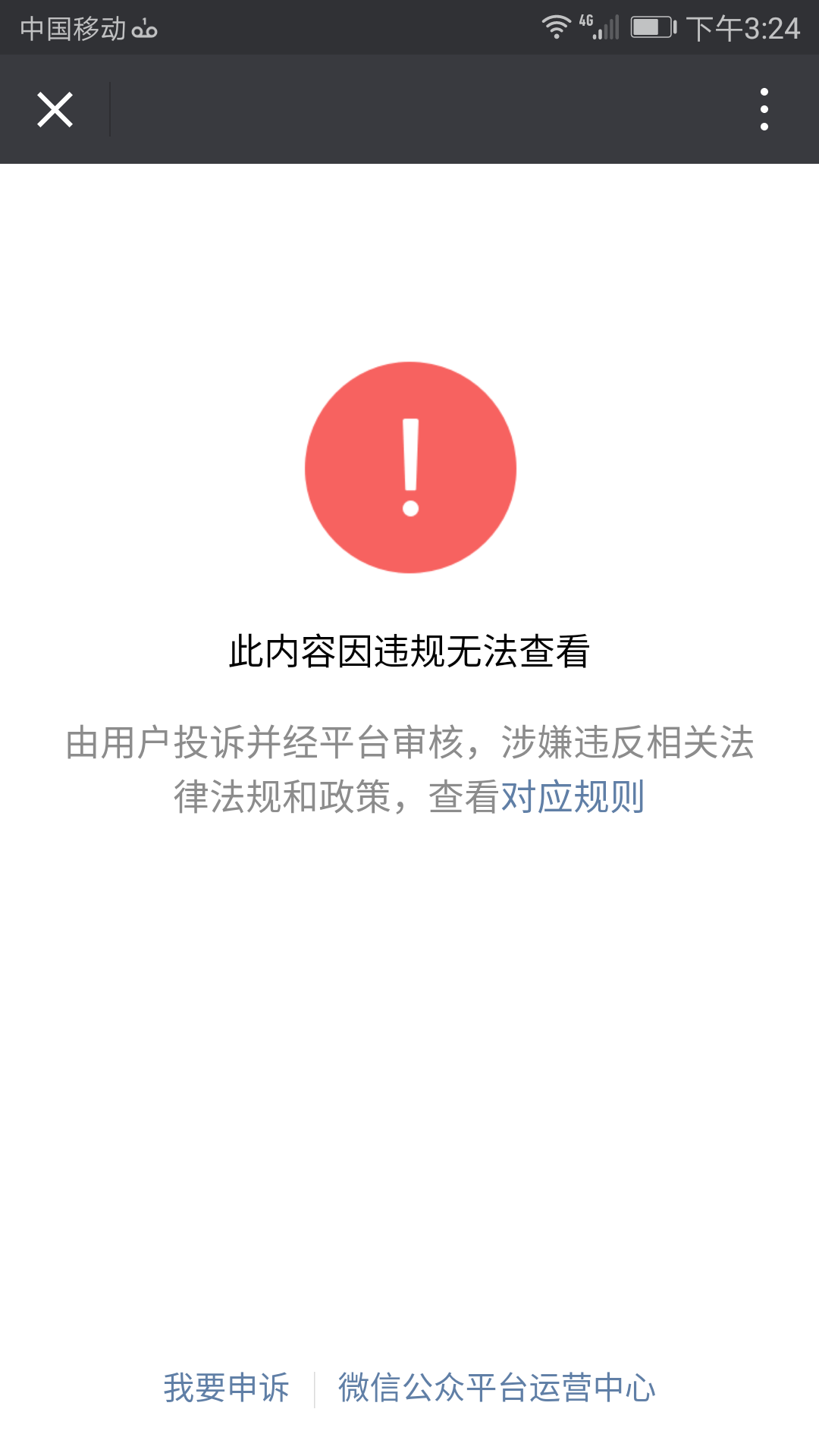 The page when an online article being deleted from WeChat Platform.

XI’AN, China — Facebook, Twitter, YouTube, Instagram are something most people need every day in the United States; people share stories, opinions, and different voices. However, in China, these social medias are all banned by the Chinese censorship, known as “The Great Fire Wall.”

Most of the people only use WeChat, Weibo such social media, which are mostly only used in China to connect with each other and share their voices.

During the 2016 World Internet Conference in Wuzhen, China, the current Chinese Chairman Jinping Xi represents the willingness of working with the international community and claimed the goal of the future network.

“We put the common welfare as the fundamental,” said Xi. “we insist the concept of network sovereignty to promote global Internet governance towards a more justly and reasonable direction, to advance the network space to achieve equal respect, innovation, development, open sharing, safe and orderly society. ”

Foreign social media is only a fraction of the actual censorship. According to the Freedom House, an organization that researches democracy, political freedom, and human rights over the world, in 2016, 111 reporters, online writers, bloggers, and Tibetans were sentenced to prison. In most of their cases are related to sharing “inappropriate” information on the social media or the Internet.

With the development of the Internet, it’s hard to avoid all the voices; there are activists, journalists or others are putting efforts in breaking the Fire Wall. In the last 10 years, there are more and more Virtual Private Network (VPN) servers to help people get in touch with outside information and some websites that are focusing on reporting what’s banned in the mainstream media, for example, the China Digital Times website.

These sites are only available in the network with VPN, which is technically illegal to use without permission from the Telecommunications Administration.

However, the Chinese officials will officially block access to VPN by February 2018, which means another way to get access to the outside network of China will shut down soon.

“In the past years, the authorities have increased the efforts, resources, and repression of the censorship,” said Qiang Xiao, the founder of China Digital Times website. “Not only deleting online posts or accounts, but also the new ways, such as arresting people, making people admitted guilt on TV, etc.

“There is also further control of the Internet company, further development of the technics, and they even hire a large number of commentator in the national-widely, local propaganda department is also their resource to strengthen their power.”

The online commentator is someone hired by the government to post favorable comments about the Chinese government or related departments as regular Internet users. They criticize the voice that against the government or comment on news events to lead and create the trend of public opinion.

The traditional media such as newspapers, magazines have to report all the content before publishing. The online accounts will get “notifications” from the officials if they publish something not approved by the officials.

According to Xiao, Digital China has received more than 2,700 review instructions from different Chinese government departments since 2004, most of them are issued orally, and the instructions are usually to instruct or limit some sensitive topics

However, no matter how hard the government tries, the voice against the censorship is keep growing, more young people start using VPN to across the Great Fire Wall and access the foreign websites and social media.

Also, the largely increased number of Chinese international students abroad bring back numerous information about China’s censorship and their voices in Weibo, WeChat such Chinese mainstream social media are also being heard by more people.

“We are studying abroad, we have access to the foreign internet,” said Michigan State University mechanical engineering sophomore Jianxing Wei. “We can speak to our family and publish things on our social media; I don’t understand the point of the censorship. The internet is growing so fast. There is no way for the government to delete all the voices; the censorship could only make their position look worse.”

In June 2017, a trend of writing about free speech right was happening among some WeChat bloggers because few VPN servers are down one by one, an amount of online users forward their articles. There are no statistics could show how many these kind pieces are, but they are eventually all removed by the officials from the WeChat Platform.

This is not the first time, everything about the dark side of the society, the disadvantage of the current system, eroticism or violence are not allowed on any media platforms. The page when an online article being deleted from WeChat Platform.

“There is no way for them (governments) to delete all of our posts,” said Xiao Meng, A Xi’an resident from China. “Even though they do eventually, a lot of people would read it by then. My friends were all forwarding those articles, and when I try to reread them from their posts, those articles are all deleted or being reported. I don’t know what else they (the officials) delete before we read them.”

The experienced journalist Aizong Zou was prohibited from speaking or posting online, and his cell phone and laptop were taken away by the officials but he still thinks it’s not realistic to actually control the media under the fast-developed technology.

“By using the official power, they can have some control,” said Zou. “But they would never win the technology, the technology is developing at a faster speed than they think.”

The officials barely respond to the censorship and why are they doing it, in some people’s opinion, the censorship has its advantage and does not influence the normal life.

“I think the censorship makes sure the speech that may endanger the social stability being filtered in time, and it can avoid the spread of rumors in the media. I don’t use the foreign social media or website, we have all the resource we need, it’s not that necessary to get to know more capitalism and their news,” said Xi’an resident WenChao Zhang.

According to Reporters Without Borders, or RWB’s report, there are a certain amount of media people are arrested because of what they’ve said, investigated, or published in the media, even some from the predominant state television broadcaster, CCTV, of the People’s Republic of China.

“in 2015 and 2016, many citizen journalists, bloggers, and human rights activists, including foreign ones, were arrested and forced into a confession,” published on the website of RWB. “In violation of the “fundamental right to due process,” these confessions were broadcast by the state TV news broadcaster, CCTV, and were reported by the state-owned New China news agency. More than 100 journalists and bloggers are currently detained.”

CCTV produces its daily broadcasting news, Xinwen Lianbo, or CCTV Tonight; this show goes on all of the local TV channels every day at 7 pm, Beijing Time. It means almost all the people who watch TV at night will be watching the same news reporting in more than 100 local channels. Most of the citizens don’t think there is anything wrong about the national daily news.

China has a long history of censorship, the Literary Inquisitions during Qing Dynasty, the ancient China’s unified, burned books and buried scholars alive during Qin Dynasty and China’s Cultural Revolution in the 19th century all shows the power of government’s public voice control. In today’s world, there is a long way to go for China’s free speech.

Actually, China is not the only country with internet restrictions in today’s world, according to the Freedom House, there is only 13 percent of the world’s population have real freedom of the press, see more information below. The free press in the world.