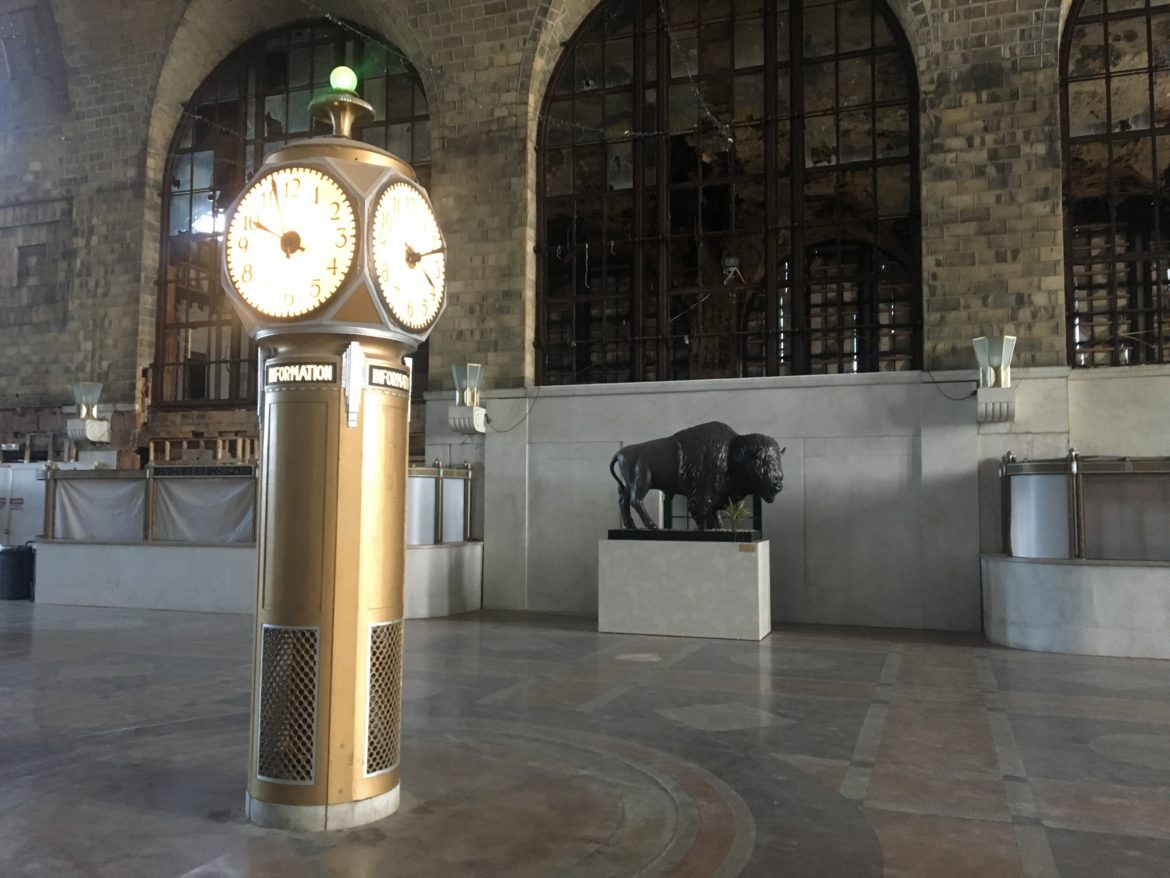 BUFFALO, N.Y. — The Central Terminal, a 523,000 square foot and 271-foot-tall abandoned train station in the middle of Buffalo’s East Side, served as a booming hub of activity for thousands of traveling people starting in 1929.

As years passed, increase in interstate highway systems and a decrease in population put the train station out of business and the final train pulled away in October 1979. Today, it sits abandoned in the middle of a blight and run down neighborhood, isolated from the improving downtown area. A plaque in the Central Terminal train station

One of the main reasons why the Central Terminal has not been redeveloped yet by any group or private investor is because of its location in the East Side of Buffalo. Sam Hoyt, Democratic politician and Regional President of the Empire State Development Corp., explains why the location of the historic building has had an enormous effect on its redevelopment.

“What makes the revitalization of downtown Buffalo so enticing is the concentration of other activities,” said Hoyt. “However, it’s difficult to develop this parcel given its distance and isolation from all of those activities which makes it difficult for people to really enjoy working there.”

From the 1930’s to the 1960’s, Buffalo prospered with nearly 600,000 people, many of whom used the Central Terminal train station to travel to cities such as New York City and Chicago. Currently, Buffalo’s population is around 300,000, half of what it used to be. The entrance to the train concourse of the Central Terminal, which is no longer in use but used to service thousands of passengers

“The Central Terminal used to be the main hub between New York City and Chicago,” said Paul Lang, architect and board member of the Central Terminal Restoration Corp. “In 1929, it was designed for a city of 1 million people but the closest Buffalo ever got to that was during World War II when there were about 220 trains running a day, mostly army infantry and military based.”

The non-profit organization which is working to rebuild this historic building, the Central Terminal Restoration Corp., joined with the Urban Land Institute of New York to conduct an in-depth $50,000 analysis study on the redevelopment of the station. Buffalo Central Terminal railroad tracks, where there used to be a bridge but it was cut down because double stacked railroad cars couldn’t fit under it

“It was determined that it was in a neighborhood that wouldn’t be well located for a rail station,” said Lent. “The economic development experts that ULI interviewed, however, did say that if they could ever redo the Central Terminal to the point where it became a hub of activity, it could turn the whole neighborhood around.” As the future of the Central Terminal is currently being debated, Hoyt explains that with improvements in infrastructure, such as electricity and water, he sees the building as a great public gathering point and a place for banquets, conferences, weddings and more. In fact, the Central Terminal Restoration Corp. has recently received a $250,000 grant for electricity.

“At one point, everything between the Central Terminal and downtown Buffalo was booming,” said Hoyt. “You didn’t have that lack of connectivity back then, but now there isn’t that prosperous activity that used to exist.” The current dining room in the Central Terminal train station, where you can still see the stool marks on the ground from the 1930’s

In the future, the Central Terminal Restoration Corp. hopes to find the best solution for this historic building and and create market value for the use of the train station while also improving the surrounding neighborhood. Some residents believe that there is no point in rebuilding it and that taxpayer money should go somewhere else. However, residents of Buffalo, such as Hoyt and Lang, believe the government should invest in stabilizing the building to prevent further deterioration and promote redevelopment.

“The Central Terminal should be made into a huge event center and money should be invested to stabilize the surrounding area,” said Hoyt. “Then we hope the economy and the revitalization of Buffalo continues to improve so there will be future interest in private sector investments.”

Buffalo Mayor Byron Brown plans to put out a nation wide proposal for ideas for the future of the 61-acre property.