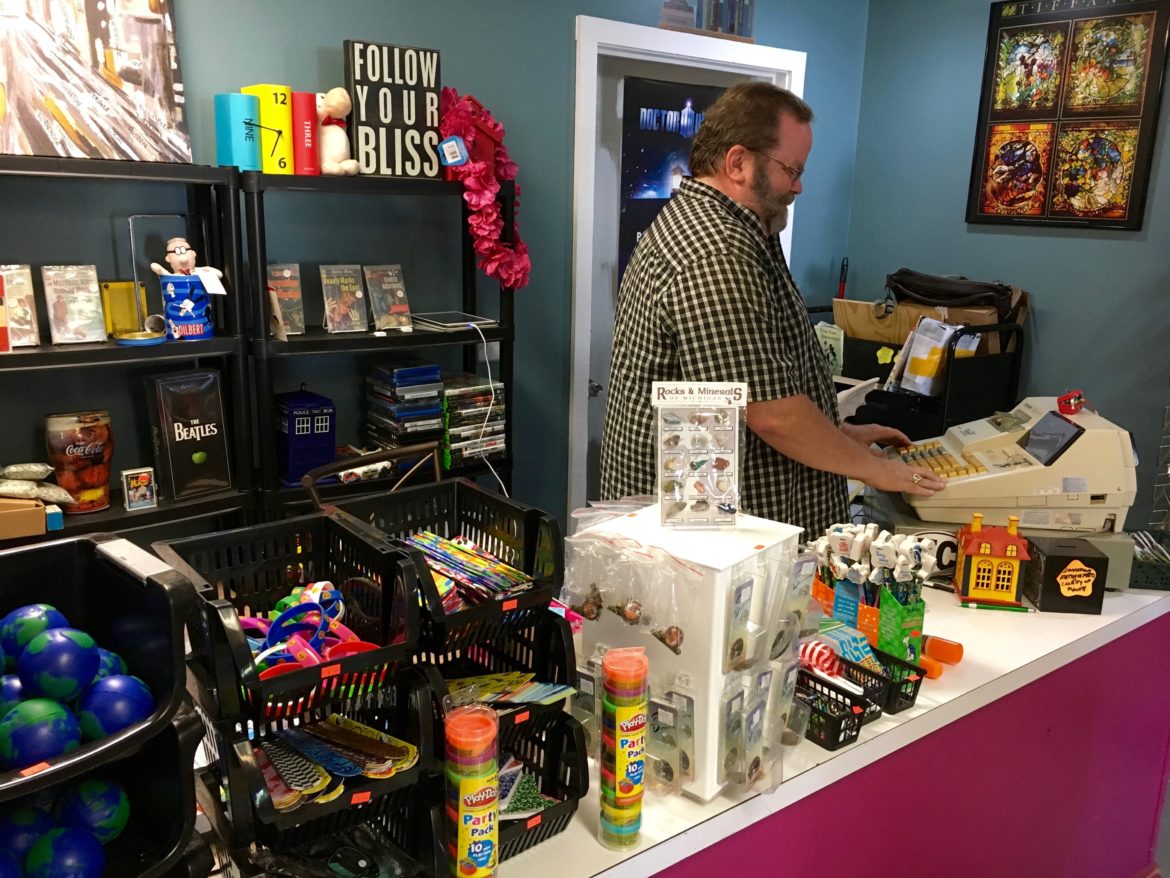 Dr. Dan McDougall works behind the counter at his local business, BookBrokers. Photo by Amy Davis.

TRAVERSE CITY, Mich. — Is Northwest Michigan caught up to society in terms of technology? What locally-created forms support this?

These questions were asked to Todd Neibauer, the vice president for Student Services and Technologies at Northwestern Michigan College, after he’s held positions related to educational technology for the past 20 years in the area.

“Traverse City is as well connected as anywhere,” says Neibauer. “The existence of cloud-based computing services allows people to launch new technology solutions from just about anywhere without the costly computer hardware and physical space that used to be necessary. It also allows many people to work in the area even though their company has no office here.”

Neibauer says that when he started in the area, the World Wide Web was brand new. Internet service was brought into the local school districts in 1995.  “Since then, access to the Internet and connected devices has lead to a transformation in just about all segments of society including education, commerce and social interaction,” he says.

Dr. Dan McDougall started BookBrokers, a local business, in 1989. BookBrokers uses local technology, including planning apps, Square, Weebly, and Librarything, among others, to help other companies create apps, use websites, games and coding. 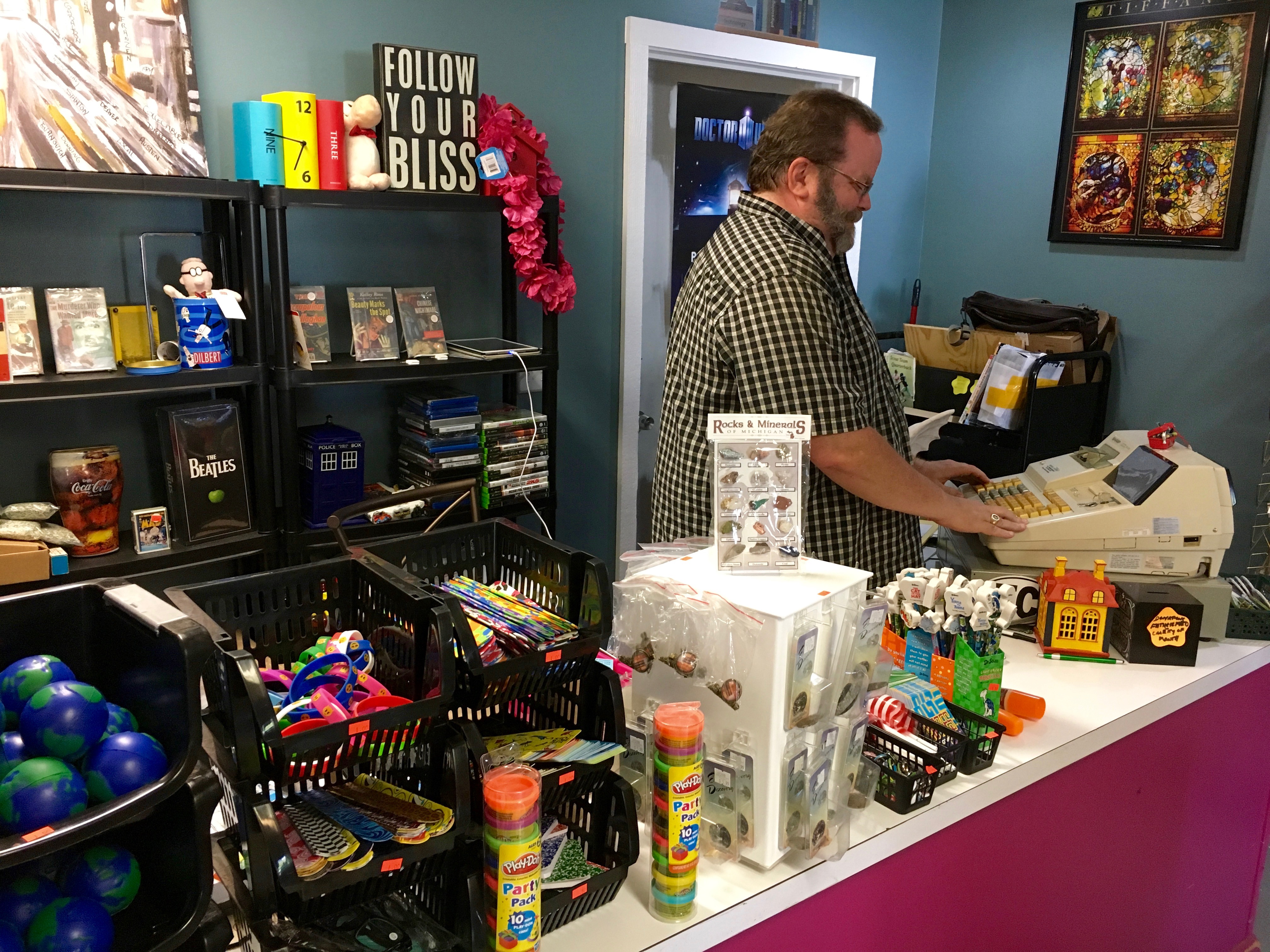 Dr. Dan McDougall works behind the counter at his local business, BookBrokers. Photo by Amy Davis. 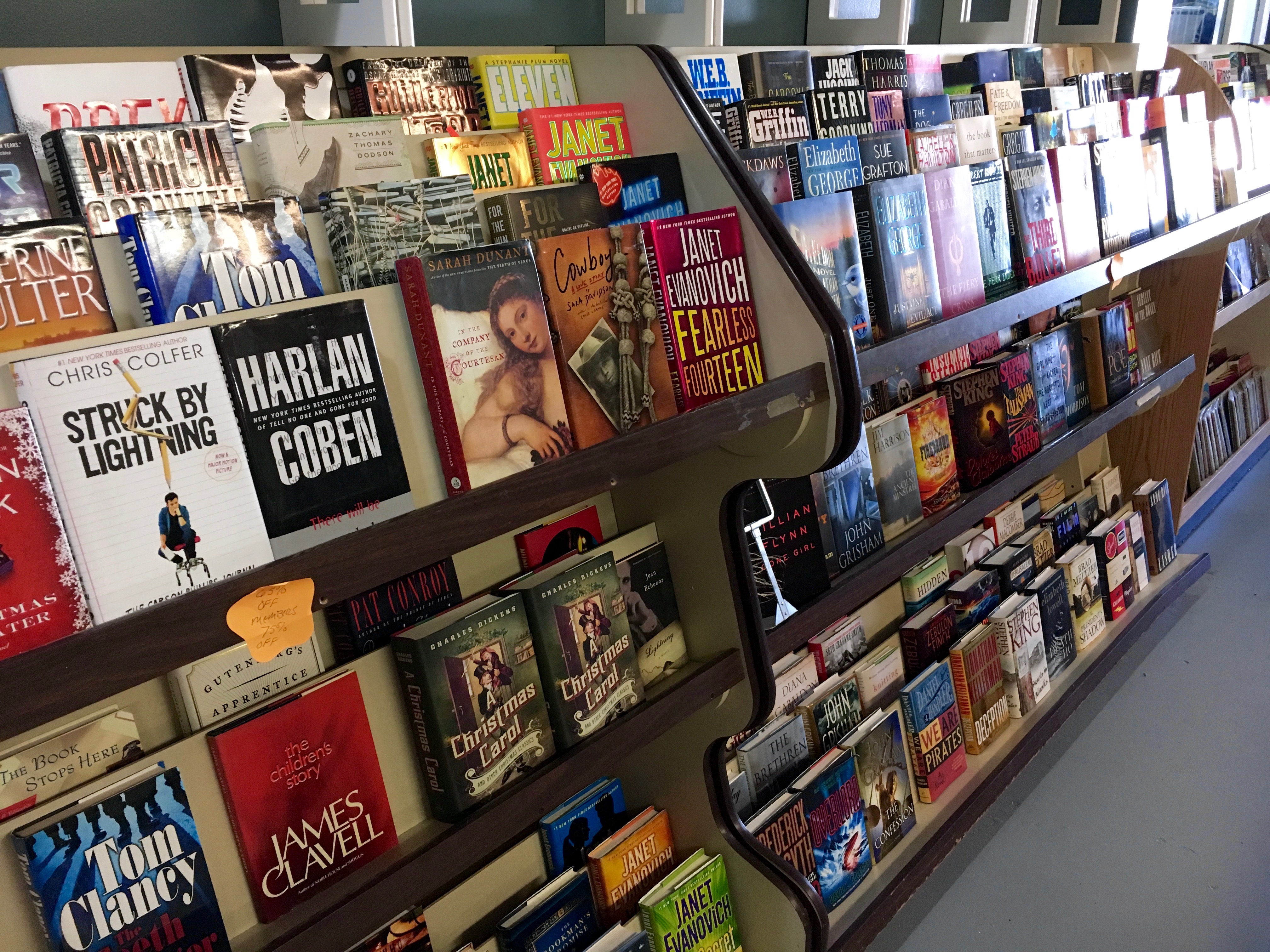 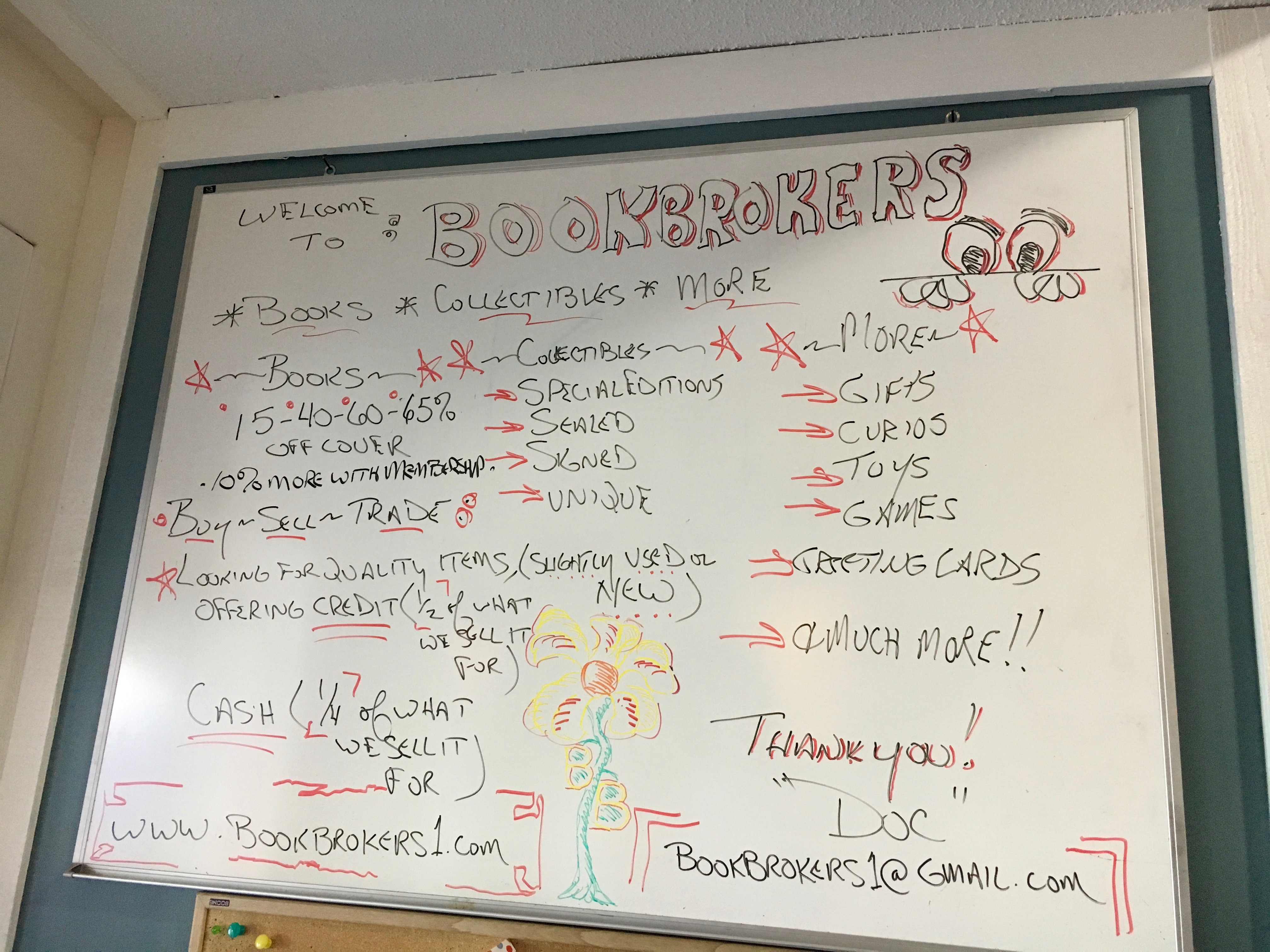 This board presents the in store items for sale at Dan McDougall's BookBrokers in Traverse City, Michigan. 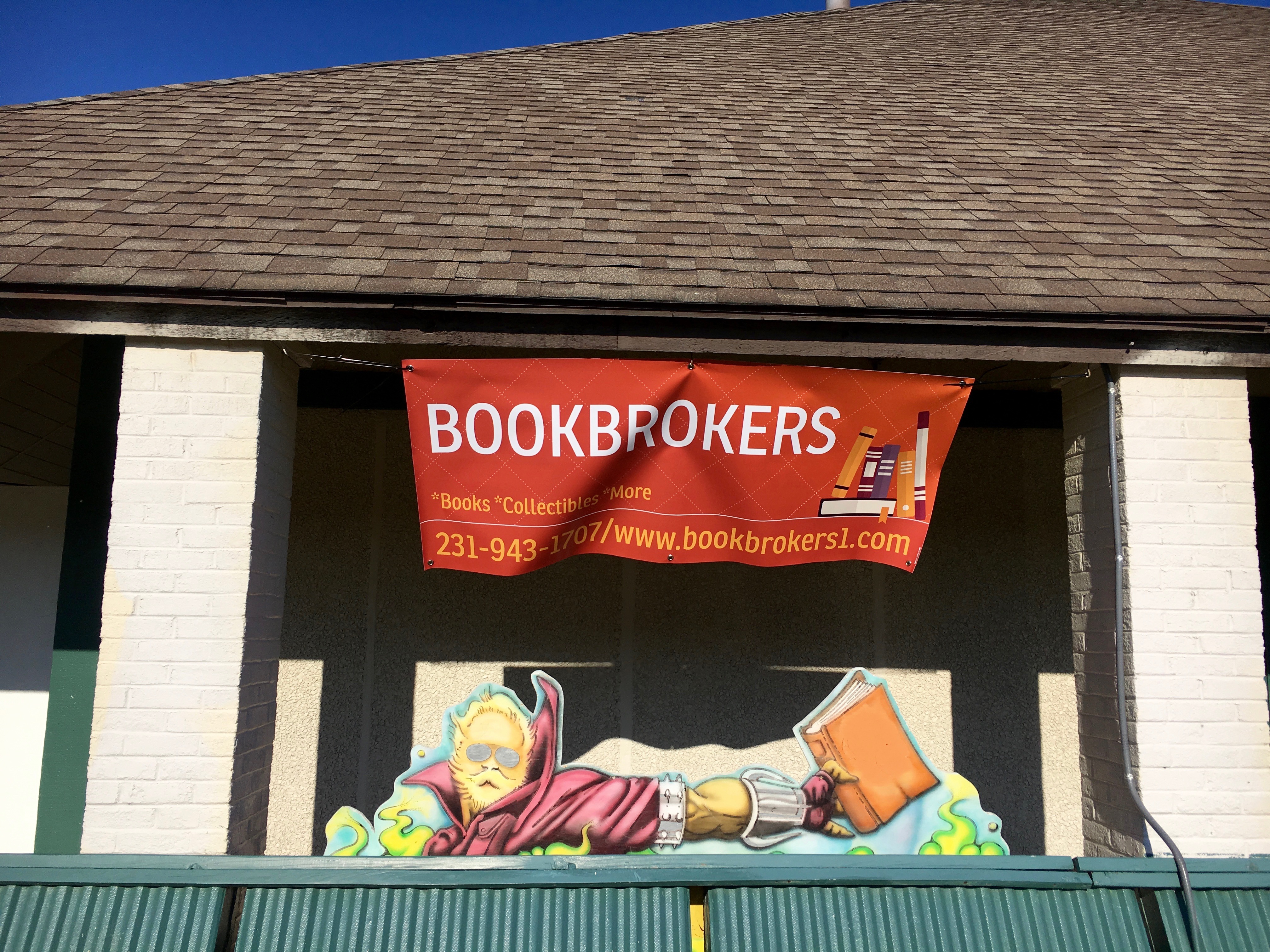 The outdoor sign welcomes customers to BookBrokers with a retro touch of owner, Dan McDougall, sprawled out underneath it. Photo by Amy Davis.

McDougall says that the hardest part in launching new technology in the area, is that he continually feels he is limited time to do everything that needs to be done. “If we feel a concept isn’t applicable to what we’re doing in the first few minutes within a program, we won’t use it,” he says.

McDougall is a strong advocate of Traverse City when it comes to advancements in technology. He graduated high school in the area, before traveling to “pick up a couple degrees and spend time with fascinating people.”

He says that after returning to Traverse City, he realized that there is no other place with opportunities in the field of technology, or any field for that matter.

“Traverse City has big town ideas, while still having the small-town feel. Because of this I’ve been able to continue my pursuits of technology with a lot of resources and assistance from the area,” he says. Chart made by Amy Davis.

One example of a locally-based app is Looma. According to Kyle Ludwig of Traverse City, Looma started as a project two years ago when he wanted to “optimize his own health.”

He met with his now cofounder, Chetan, who was allegedly “more technical” than him, to pin point what potential users wanted this program to do. Ludwig says that this was the hardest part in launching Looma.

“It’s difficult to understand people in what problem they want our product to solve,” he says. The LiveLooma team is made up of a developer, Chetan, the designer, Adam, and the marketer/project manager, Kyle, who together have been adapting a solution to what people want.

“Our app recommends recipes one at a time based on setup questions to determine goals, calories, macros and even taste. We align these things for each recommendation as you then can choose and plan what to eat for the week. Next, a grocery list and directions/nutrition information(per recipe and day) are given to make it easy to measure progress and take action.

We’ll soon be adding features to save recipes to collections, making endless pinning of healthy recipes more actionable. We found many solutions like diets and calorie counters were effective but took time and limited variety, so we’re trying to change all that,” says Ludwig.

Another app that was created in Traverse City, is QwikFun, which can be used to learn of events taking place in the area. Dave Durbin says that he developed the app through several steps.

“It started with creating the concept and then drawing out the functionality of the app.  After that I had to find a developer who would be available, ready to start, able to focus on this project, and stay within a limited budget. Once he and I agreed to move forward, he was able to complete both an Android and iOS version in about 6 weeks,” he says.

“Having apps available that are locally based allows for almost a secret insight on the city as a tourist,” he says. “QwikFun makes it much easier to find events like festivals, music, food, drinks, movies, and many more.”

Durbin says that if a new technology piece comes out in Traverse City it will be embraced as long as it has one or more of these qualities; it’s useful, it solves a problem, it’s entertaining, and it’s simple to use.

“I like to think QwikFun has all of these qualities so hopefully it will continue to be found of value to all the Traverse City residents,” says Durbin.