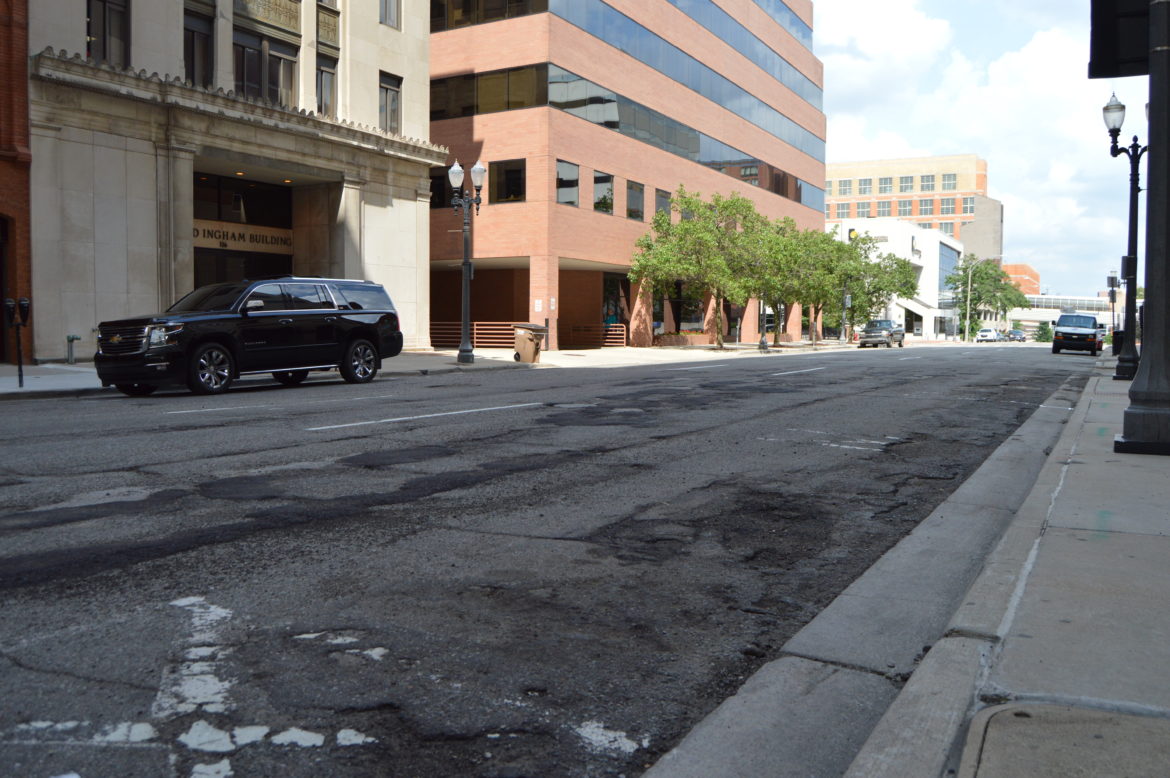 This section of Ottawa Street in Lansing is among those considered to be in poor condition by the Paser ratings. This section of Ottawa Street in Lansing is among those considered to be in poor condition by the Paser ratings.

The poor road conditions have made commuting in Lansing difficult for many residents and employees who drive in the city.

City Chief Operating Officer and Director of Public Service Chad Gamble is very aware of the road conditions affecting these residents and employees.

The slow maintenance of roads in the area is due to the lack of funding and high cost of maintaining roads, particularly in the state of Michigan. The annual street funding for the City of Lansing dropped significantly between 2009 and 2010 and has yet to make a comeback 7 years later.

Money is allocated from a few different sources in order to maintain Lansing’s streets. Act 51, established in 1951, is a fund that goes toward the maintenance of streets. Money is deposited into the Michigan Transportation Fund from State motor fuel taxes and Vehicle Registration fees.

Lansing receives $8.3 million a year from Act 51 to maintain roads. The city allocates $1.8 million from the budget for winter maintenance but more funds may need to be pulled because of salting and plowing.

“Because we live in the northern tier states, the freeze thaw effects damage our roads at an accelerated rate,” Gamble said. “We spend almost $2 million a year just to remove snow with absolutely no benefit toward the road.”

A newly-constructed street typically has a life expectancy of 20 to 30 years, however, the expectancy can be extended or shortened depending on maintenance or lack of. Freeze thaw cycles during the winter and salting the roads drastically deteriorate and crack pavement.

The need for new roads outweighs funding and, according to Gamble, it is not primarily a local issue because Michigan is among the northern tier states.

“The funding mechanism is really broke because the funding that comes in from the state and federal government is not indicative of the needs of the northern tier states,” Gamble said.

The City of Lansing is responsible for maintaining over 400 miles of streets and each mile of street costs approximately $400,000 to repair.

Joe McDonald, housing ombudsman for the City of Lansing, explains that the Public Service Department is responsible for judging the condition of streets based on the PASER ratings. PASER ratings are based on a scale of 1 to 10, one being the worst condition and 10 being excellent condition.

“They have judged the condition of every street in the city and it’s hundreds of millions of dollars short of what we need every year from what the state gives us because of the funding mechanism base on 1951 act,” McDonald said. “It’s not current, it’s not what we need this day and age to fix the roads.” The bar chart represents the composite street ratings as of May 2017. According to the information given, more than 50 percent of streets in Lansing are in poor condition making the average rating a 4.14 out of 10. Data collected from lansingmi.gov.

Act 51 also lacks the ability to keep up with new technology such as hybrid cars, which deteriorate the roads at the same rate as a normal car. Gamble explained that funding cannot keep up because hybrid cars use less gas, which is a huge contributor to the funds that the city needs to repair these roads.

“Now the funding mechanism for the nations infrastructure is not keeping up with the technology that is being utilized to drive on that very piece of infrastructure,” Gamble said.

“So their funding model to a large degree is completely broken.”

The 400 miles of roads that Lansing is responsible for maintaining includes 1,000 lane miles because many streets have more than two lanes. According to Gamble, the limited funds the city has are disproportionate compared to rural areas because it costs even more if that mile of pavement has multiple lanes.

“There are some variables in Act 51 funding that make up for urbanized areas, however, lane mile calculations are per lane mile on the centerline,” Gamble said.

Project Engineer Ann Parry is among the engineers responsible for the large projects, such as reconstructing a brand new road.

“The Operations and Maintenance division does a lot of the main of the roads,” Parry said. “The Engineering Division chooses projects that need to be under construction or need some sort maintenances based on the PASER ratings.”

Big projects such as reconstructing a road take more time than just filling potholes in the roads. Parry, who has worked as a project engineer for the past 14 years, said that major streets typically need a five year plan because they need to apply for federal funding.

Operations and maintenance workers go around and maintain roads by filling cracks and potholes which doesn’t require much planning— most of it is done in response to peoples calls to the city’s pothole line.

Potholes are filled, however, the material used to fill does not last because water continues to enter the cracks in the filling, which is the cause of the pothole from the beginning.

Roads are an issue Gamble has been lobbying for ever since the automatic inflator was taken off legislation in 1998.

“We would have kept up with inflation and had all the funding we’re maybe getting close to for the past 20 years,” Gamble said referring to the inflator.

“Now we’re playing catch up and trying to solve an equation that is just not going to balance.”