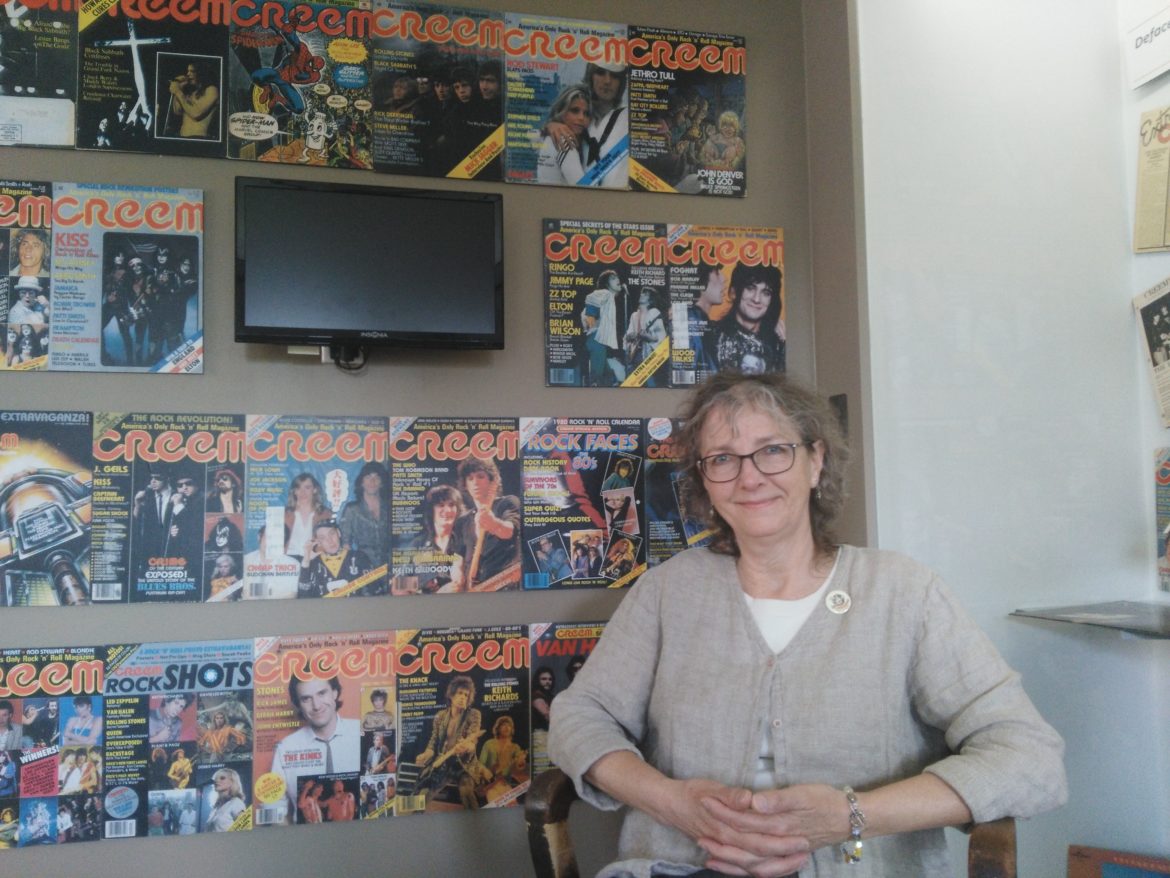 Leslie Pielack, Director of the Birmingham Museum sitting in front of a collection of frontages from CREEM Magazine. Photo by Simone Fenzi. Leslie Pielack, Director of the Birmingham Museum sitting in front of a collection of frontages from CREEM Magazine. Photo by Simone Fenzi.

BIRMINGHAM, Mich. — This Detroit suburb found itself standing in the center of one of the most diverse culinary scenes in Michigan. However, as people walk between the trafficked streets of this town to find the perfect restaurant, many don’t realize the importance of where they are standing.

One person who is determined to tell the story of this small city is the Director of the Birmingham Museum, Leslie Pielack. She started this job 6 years ago when the museum was still called the Birmingham Historical Museum and Park.

While museums in many small cities have been closing rapidly due to lack of interest, the Birmingham Museum has managed to survive the recession of 2008 and grow its roots in the community. Pielack believes that many museums have been using “models from the last century when people used to come to you.” However, she explains “this doesn’t seem to work anymore” as communities have grown.

Pielack believes that “outreach and reputation” are the two most valuable assets to a museum. Since the beginning of her job she has created an Instagram account for the museum where she advertises the exhibits. She has also uploaded a virtual tour of the museum so that people can get a taste of what the Birmingham Museum is even before stepping inside. Even the change of name had a purpose. Pielack said “historic has a negative connotation nowadays, so we decided to remove it.” Landmark created in 1922 to publicize the Birmingham 8 Theater in Birmingham, Mich. Photo by Simone Fenzi.

Through all these changes, Pielack has had a motto that guides her. She said “when we tell stories, we tell stories about people.” She strongly believes that, as humans we are more attracted by other people then we are with objects. This motto can be seen as she welcomes the second-graders each year to tell stories about the residents of this small town many of them will grow up in.

One of these stories is that of the historic Birmingham 8 Theater and the person whose story she tells is that of Lester Bangs, Editor of CREEM magazine.

“There is so much history in this theater” says Rocco Tenaglia, a manager at the Birmingham Theater. Tenaglia explains that despite the various renovation “we have tried to keep the atmosphere nostalgic.”

Lester Bangs moved the CREEM offices in the Birmingham Theater in the 1971 after he became the editor in chief.

After the magazine went out of business, the building was bought and renovated in the 1990s. This renovation was followed by many alteration including one that is currently taking place. Tenaglia assured that “the renovation will not disrupt the atmosphere of the theater.” This feeling of nostalgia is kept because of the success that the theater is having with the senior population.

Data representing the demographics of the city of Birmingham, Mich. Table by Simone Fenzi; data from city-data.com/city/birmingham-michigan.html

Birmingham has a relatively small population. As seen in the demographic table, the average age and income establish this community as ideal for seniors. Carol Levante is a 63-year-old Birmingham resident who has been living in Birmingham for her whole life. “I believe in the history of every place,” Levante said. “However, you cannot leave the history of the community in the hands of the seniors.”

Mike Rutgar is another Birmingham resident who seconds Levante’s thoughts. He went on to say “we need to involve the young people in our history. I believe that what our museum is doing is great with technology.” Rutgar has been living in the community for 8 years and he summed up his ideas by saying “too much history is lost in small town due to lack of interest and money” and he believes that it should not be this way.

Kay LaFrance-Knight is often too familiar with this issue. She has spent the past 10 years of her life advocating for small town museums preservation. LaFrance-Knight published an article in Main Street America stating that “small communities often decide to turn a historic landmark into a museum,” however when ” excitement wanes, visitor attendance drops, the proud collection starts to gather dust” the museums often fail.

Ultimately the city of Birmingham is just one of the many small towns who is battling to keep their history alive in an ever-evolving environment.