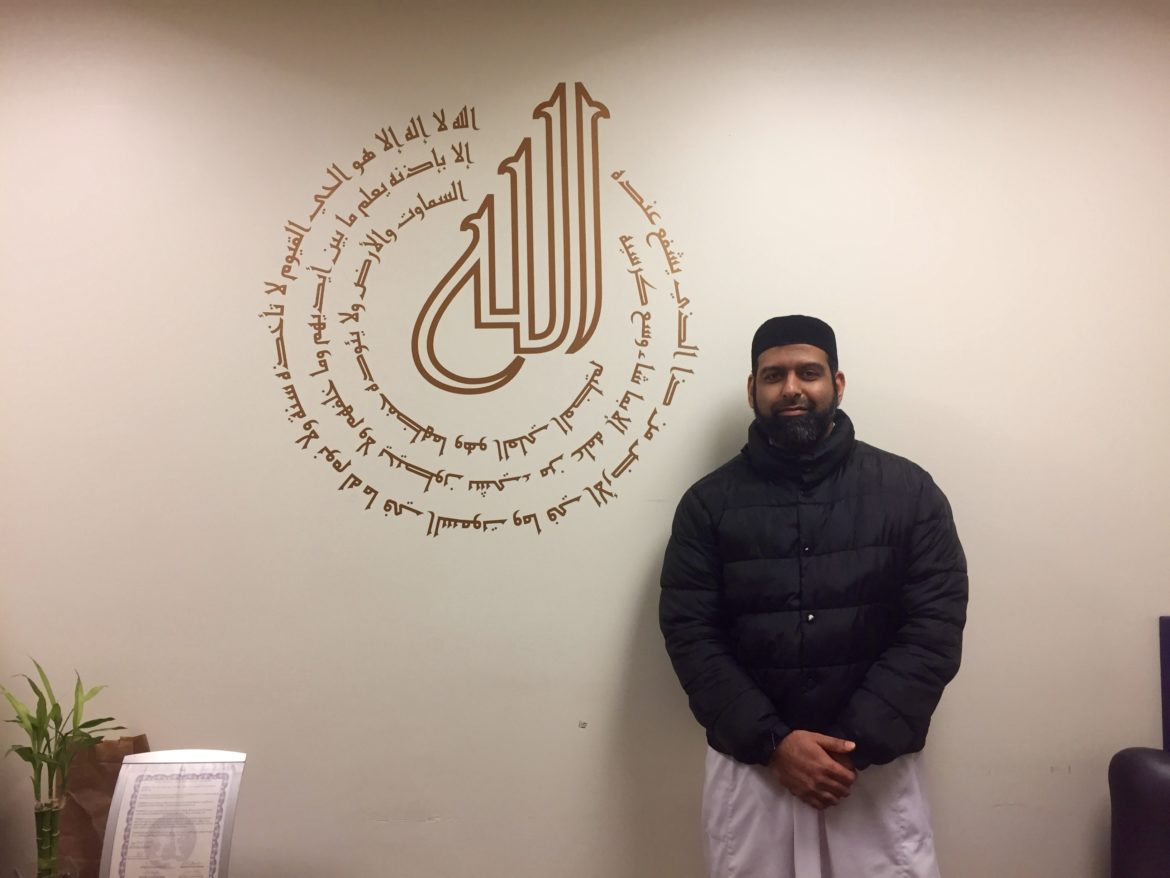 Sohail Chaudhry, standing in front of a verse from the Quran in his office at The Islamic Center of East Lansing on Thursday, March 2.

Nationally, anti-Muslim assaults in 2015 reached the highest level since the Sept. 11 terrorist attacks. There were 91 aggravated or simple assaults motivated by anti-Muslim bias in 2015, according to a Pew Research Center analysis of FBI hate crime statistics. That was a 63 percent increase over the previous year and the highest since 93 were reported in 2001.

Sohail Chaudrey, the imam at The Islamic Center of East Lansing, said the 2016 election campaign created a narrative that Muslim people are a danger and you should fear them. In January, President Trump ordered a ban on citizens from seven largely Muslim nations — Iraq, Syria, Iran, Libya, Somalia, Sudan and Yemen —from entering the United States. The order was blocked by federal courts, as was a followup order in March.

Chaudrey said the mood now is different from the months after the Sept. 11 attacks. Then, national leaders weren’t making broad statements against Islam, he said.

“There is no neutral ground like there was before,” Chaudhry said.

According to a survey conducted by the Pew, about half of Americans think at least “some” Muslims in the U.S. are anti-America.

Chaudhry is from Pakistan and in 1999 moved to the United States at 17 to attend West Virginia University. He studied computer engineering, but was also active with the campus Muslim students association and the local mosque. Although he was raised in a Muslim family, Chaudhry said that’s where he found his passion for Islam.

Despite an increase nationally in anti-Muslim sentiments, Chaudhry said he’s found university towns to be more accepting, which is why he has loved his time in East Lansing.

East Lansing’s mosque has been around since 1979. There have been few local issues, he said.

“The so-called experts you see being interviewed on TV are not talking about my religion. They do not speak of Islam,” Chaudhry said.

He said these so-called experts try to connect Islam to terrorism, and there aren’t enough voices in the media countering those opinions.

Mohammad Khalil, associate professor of religious studies and the director of the Muslim Studies Program at Michigan State University, is a practicing Muslim who believes there is a lack of public awareness about Islam.

“The more one knows Muslims, the less likely one will be Islamophobic,” Khalil said. Hauwa Abbas, sitting in a Michigan State University classroom talking about her religion on Friday, Feb. 24, 2017.

There are 1.6 billion Muslims in the world, as of 2010, according to the Pew Research Center. That is approximately 23 percent of the global population, making Islam the second-largest religion. Christianity is the largest.

Abbas said she has friends from the seven countries included in Trump’s travel ban. One of those friends is from Somalia and was planning a trip back home — a trip that’s been delayed. Abbas said that’s only one of many sad stories that are a result of the “Muslim ban”, which she said is “obviously” directed toward Muslim people.