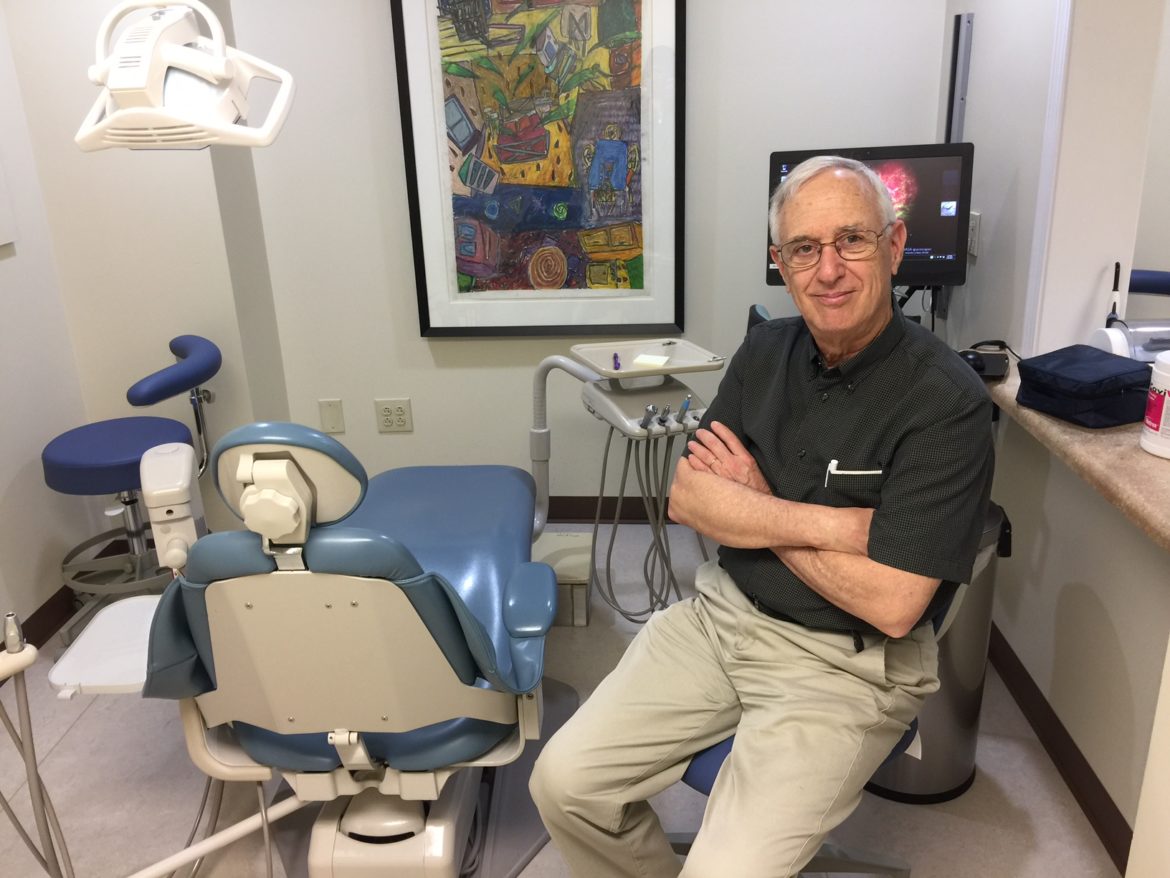 Dr. Peter Chiaravalli didn’t realize he knew the young man sitting across from him at lunch in a Volunteers of America shelter.

The man had his earbuds in during the meal, so there wasn’t any conversation.

“Then at 1 o’clock I see him and he says, ‘Do you remember who I am?’ said Chiaravalli, a dentist who helped start a dental clinic in 2014 for the homeless in Lansing. He often eats with clients of the nonprofit agency in the shelter cafeteria.

“Yeah, you sat across from me at lunch,” Chiaravalli replied.

“I babysat for your kids.”

How to help locally?
In Lansing and the surrounding areas, there are almost 20 shelters willing to take both donations and volunteers. The Lansing Shelter System an Office of Volunteers of America is located at 430 N. Larch St. in Lansing and can be contacted at (517) 489-5279. More information can also be found at voami.org.

The man in the homeless shelter was the son of two physicians who took violin lessons growing up. Chiaravalli said he had all the trappings of the ideal upper middle class upbringing.

“This kid was born with a silver spoon in his mouth, how did he end up homeless?” Chiaravalli said.

What causes homelessness?
“Unequivocally, the No. 1 reason for homelessness that people cite when they come to us is an eviction,” said Darin Estep, Lansing area vice president of community engagement for the VOA. “We have some consistent statistics: 40 percent of the homeless people we work with here have a physical disability. Another 40 percent with some overlap has mental illness. Roughly half with an additional overlap would be some kind of substance abuse.

“All those things have in common inability for consistent work.” Eviction blindsides many people at the bottom of the income scale. Citizens in poverty – those people making equal to or less than $12,000 annually in a single-person family according to the Office of the Assistant Secretary for Planning and Evaluation – are in a tough situation because they have no resource net besides their paychecks.

Eviction was part of the reason that 54-year-old Diana Ramey, a VOA client, became homeless five years ago.

“It was July 25, 2012, that I became homeless,” said Ramey a former psychology student and volunteer, who became homeless after her husband of 33 years left her. “When he left, I had a nervous breakdown and lost everything and went to shelter to shelter in Arkansas.”

In 2013, Ramey’s cousin brought her to Michigan to live with her. Unfortunately, the cousin committed suicide after her own divorce, forcing Ramey back onto the streets.

But, Ramey said, things are turning around.

“I’ve got an apartment that’s going to be mine,” Ramey said. “Things are looking up for me because I was told to stop being prideful and ask when you need help and I hadn’t done that.”

Ramey said that she hopes to give back once she gets back on her feet by volunteering at the VOA.

“I’m going to continue volunteering until I can’t volunteer,” said Ramey said, adding that her heart condition has made it difficult to work. “I know I can’t do what I used to do, so I’m OK with that. But there are a lot of people that are looking for jobs, that lost their jobs, that became homeless, that had families as well.”

How does Michigan compare to national averages?
By state, Michigan ranks 36th in poverty levels, according to Talk Poverty. The data is broken also down by county on the Poverty Map on povertyusa.org. On an even smaller scale, Lansing is the second poorest city behind Detroit in Michigan. According to data from Volunteers of America Michigan, its 400 N. Larch St. location is in the 22nd poorest neighborhood in the state out of 1,169 ZIP codes.

According to the Greater Lansing Homeless Resolution Network, more than 4,000 people experienced homelessness in 2015 in Ingham County. Since 2011, the total number of people the Lansing VOA chapter has served has roughly doubled.

“In 2011, they started enforcing welfare reforms that had been established during the Clinton administration, meaning that there’s a lifetime limit of 48 months,” Estep said. “So what we saw starting in 2011 were the welfare rules starting to shed people.

“This doesn’t mean that people are getting well-paying jobs all of a sudden, don’t need welfare. It means that they’ve expired on their benefits. So what you’ve got here are 4,000 people who are not receiving any form of state assistance. That number reflects somewhat directly with the increases we’ve seen here.”

Estep said the VOA has implemented a variety of new programs to help people with immediate needs, and to keep them off the streets long-term. One method is the VI-SPDAT tool — which is a statistical predictor of homelessness. It assess a variety of issues unique to the individual clients at the VOA, like health and social issues.

“It’s a statistically valid predictor of somebody’s vulnerability, they call it morbidity to mortality usually a rate from 0-20 with 0 being ‘fine’ and ’20’ being very rough shape,” Estep said. “It’s a method that was adopted from senior health care with an understanding that a holistic approach is best and most cost-effective for these fragile cases.”

The results have been good, Estep said, and VOA recently found housing for 50 of its toughest cases.

And the nonprofit is expanding health care with services like the dental clinic led by Dr. Chiaravalli.

We’ve just been trying to improve things for the people one after another,” said Patrick Patterson, executive vice president of the VOA Michigan. “The research is very clear that the average homeless person hasn’t seen a dentist in nine years.”

One thought on “How do people descend into poverty and how does that affect Lansing?”