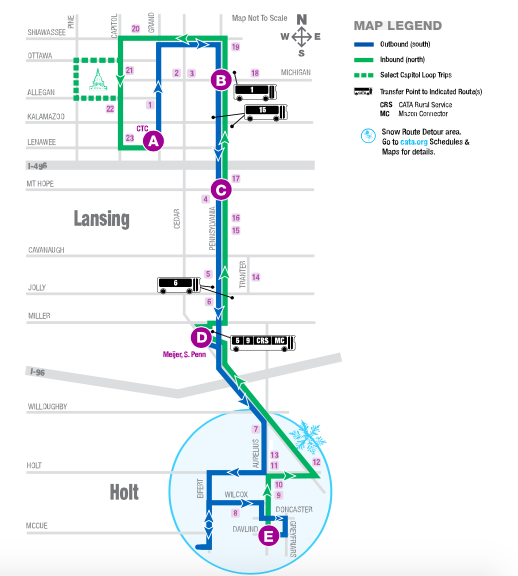 An ongoing concern in Holt for residents is the lack of public transportation dependability in the community.The Capital Area Transportation Authority also known as the CATA is the public transit system that operates through Holt. Residents say that they spend hundreds of dollars a month on Ubers, Lyfts, and other forms of transportation.

Residents are having several continuing issues with the CATA from there not being enough buses that run through Holt; buses are not getting to the stops on time; and there have been cases where the bus allegedly simply does not show up.

Douglas Lecato, CATA Board of Directors Vice Chair for Delhi Township says that he is aware of these issues and that the CATA executive staff along with the board are working to fix these problems as soon as possible by hiring more drivers.

According to Jasmine Roy, there is only one bus that comes to Holt which is the #8 Pennsylvania-Holt bus. Roy says that the #8 CATA only goes down some streets and she has had to get off at on stop and almost walk a mile to her destination. Walter McBride says that he has been using the CATA for about 11 years now. He believes that he has saved thousands of dollars by doing so. Although he is a regular on the CATA and plans to keep it that way, he has had his share of hiccups with the CATA.

“I was heading to work a few months back and I left out at my usual time but I guess my bus driver did not that day. I stood there for an extra hour after the time it was supposed come and it never showed up. I had to call my manager to let her know what was going on and pay for an Uber,” said McBride.

June Manning Thomas, a professor of Urban and Regional Planning at the University of Michigan Taubman College of Architecture and Urban Planning, says that public transportation is an issue in every city but it is up to the residents in that city to stay on those who can fix the problem for a solution.