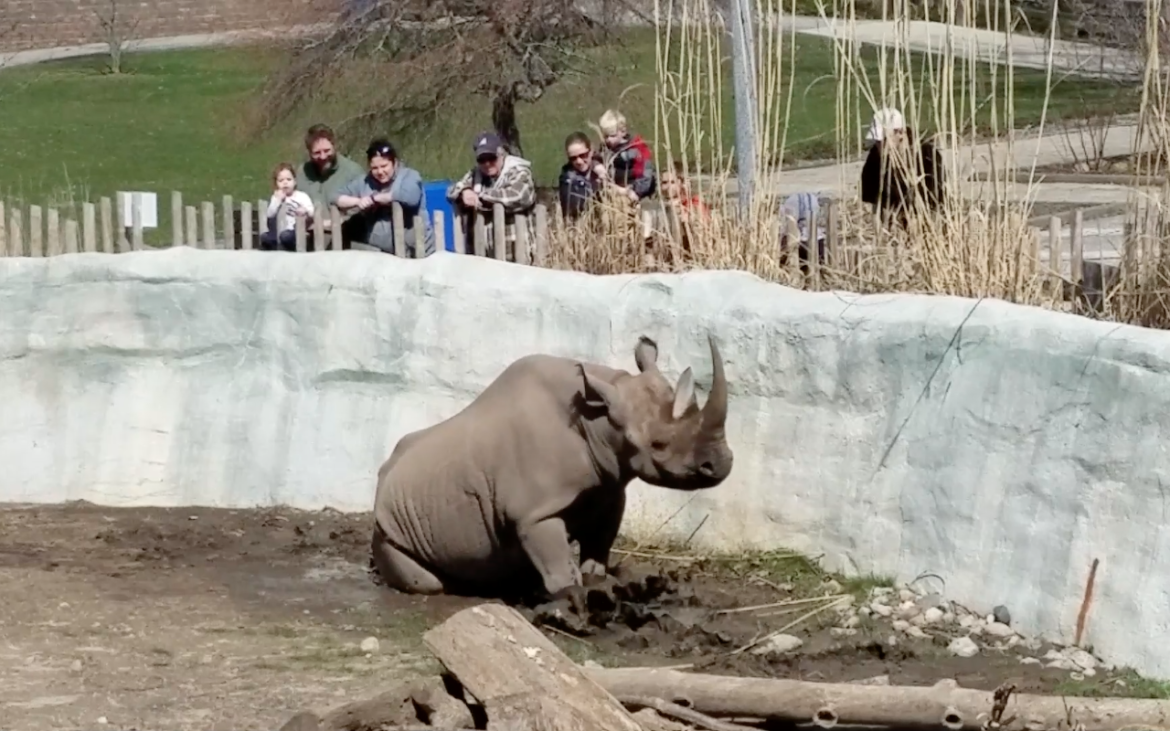 Doppsee cooling off in the mud on a particularly warm day. Photo taken by Zach Sgro Doppsee cooling off in the mud on a particularly warm day. Photo taken by Zach Sgro

The South African black rhino has faced large-scale poaching since 1970 making them a critically endangered species. Recently only 458 rhinos were poached in 2016 dropping the rate to 7.9 percent, according to the South African Department of Environmental Affairs. The current population is up to just over 5,000, between captivity and conservation parks, and the black rhino is making a comeback but, it still has a long way to go before they can make it off of the endangered species list.

Lansing’s Potter Park Zoo is hoping to make a difference in the rhino’s comeback, with plans to unite one of the zoo’s resident rhinos, Doppsee, with a suitor from Texas named Phineas, according to the Lansing State Journal.

“We’re really excited because we love the rhino we have over here,” Pat Fountain, head keeper at Potter Park Zoo, told Spartan Newsroom. “The idea of her having a calf here is pretty much the most exciting thing we could have ever imagined.” Patrons observing Doppsee as she investigates the guests along the enclosure. Photo taken by Zach Sgro

Programs like the Black Rhino Species Survival Plan (SSP), from the Association of Zoos (AZA) and Aquariums developed in 1981, focus on endangered species and ensure their survival through careful genetic planning and captive breeding programs eliminating the threat of poaching. For genetically valuable animals like Doppsee and Phineas, this means that their decedents will be able to continue breeding while maintaining the proper amount of genetic diversity.

This past year 20 black rhino breeding recommendations were made by the AZA, and over two years ago the SSP suggested these two rhinos be part of the exclusive group. Phineas, nine years old, is close enough to full sexual maturity, 10-12 years of age, allowing for the courtship to occur after the shipping process is complete. Transporting him across 1,094 miles for over 16 hours is no easy task, but it is an exciting time around the zoo especially as the park opens for its summer season. Phineas will be carried in a secure, temperature controlled crate, which has mandatory stops every three hours to check on his food, water, and overall wellness.

“Every animal that comes to the zoo has to go through a 30-day quarantine,” said Cynthia Wagner, Potter Park Director. “And after that, he will be introduced to Doppsee.”

Even after the long journey, there is still much for the park to do to acclimate their new attraction to his life in Lansing but workers are confident that all will go well. After the first few days all will return to normal and Doppsee’s keepers will have their typical duties doubled.