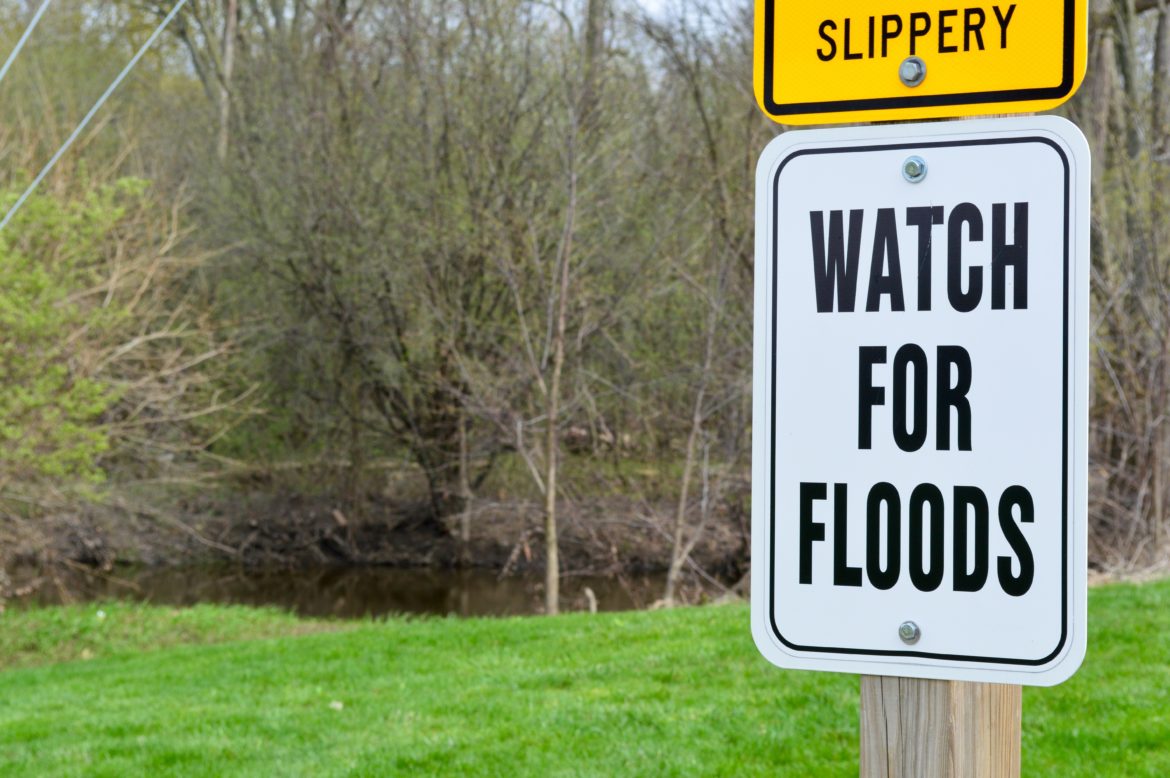 A sign warns pedestrians who are using the Lansing River Trail to watch for floods. Photo by Hannah Holliday.

It’s a classic springtime rhyme, “April showers bring May flowers.” But, believe it or not, the rainy month of April can also do more harm than good when it comes to impacting the water quality of Mid-Michigan rivers and watersheds, specifically the Grand River and Red Cedar River which both border Lansing Charter Township.

In order to keep water quality safe, Lansing Township is one of 20 jurisdictions that are a member of the Greater Lansing Regional Committee (GLRC) for Stormwater Management which is composed of also the City of Lansing, East Lansing, Meridian and MSU, according to the GRLC’s website.

Ruth Kline-Robach a specialist for Michigan State University’s Institute for Water Research explains the impact flooding can have on rivers. A sign warns pedestrians who are using the Lansing River Trail to watch for floods. Photo by Hannah Holliday.

“Any time you get a flooding event you have the potential for washing anything, any type of contaminant or pollutant that is sitting on the land into the water, which does absolutely raise water quality concerns,” Kline-Robach said. “So, anything if you think about leaks and drips from our cars, if you think about animal waste on the land’s surface, improperly operating septic systems. When those waters rise including the water level meaning the ground levels rise, you could have potential water quality impact.” The western portion of Lansing Charter Township boarders a section of the Grand River watershed which includes the Grand River. Source: Hannah Holliday via: Google Maps.

The east side of the township borders a section of the Red Cedar River located in close proximity to Michigan State University’s campus, according to Google maps.

David Schindler, a professor emeritus in biological studies from the University of Alberta confirmed that urban and paved areas have more runoff.

“Paved areas also cause more runoff than natural areas,” Schindler said. “There is no infiltration of water to replenish soils and groundwater or be delayed in travel to streams and lakes, so it hits the water bodies as a sudden slug, the reason why we often see flooded streets and underpasses following major storms.”

“In older systems, storm drains are connected to wastewater treatment systems, so that during storms the systems are overwhelmed, and the water bodies receive a mixture of both,” Schindler said. In order to keep water quality safe, Lansing Township is one of 20 jurisdictions that are a member of the Greater Lansing Regional Committee (GLRC) for Stormwater Management which is composed of also the City of Lansing, East Lansing, Meridian and MSU, according to the GRLC’s website.

According to Kline Robach there’s a lot of work being done in the Mid-Michigan area on both the RCR and the Grand River in terms of watershed management planning.

“In urban areas we all have storm water management programs that are in place and that’s part of our Clean Water Act regulations,” Kline Robach said. So we are permitted under the federal clean water act to discharge storm water into the Red Cedar River in the case of Michigan State. So all of those outfalls any of the pipes that you see coming out into the river, when it rains that water goes into the catch basin, the storm drain and then ultimately discharges into the river. So it’s our job with our storm water management programs to protect the water in the river so we’re trying to make sure that there’s nothing but rain water going in.”

As member of the GLRC, Lansing Township must follow the Public Education Program which is created by the GLRC and submit progress reports to show that they are meeting the standards they’ve committed in their permits, which run in a 5-year cycle, said Cliff Walls, the environmental sustainability planner at the GLRC.

According to Walls, there is a Public Education Committee that meets regularly and proposes updates, checks on the status of their current campaign, and alters their focus as needed. Walls performs and facilitates public outreach events such as booth displays and billboards that employees of each municipality have access to.

“Our most recent update, for the permits, you not only need to show you have been performing public education, but you need to prove that it is working and meeting the goal of educating people about their role in storm water management,” Walls said. “That said, we updated our public education plan for this next permit cycle to include a commitment to a public survey.”

The township works to raise community awareness by providing “Do You Know Your Watershed” pamphlets inside their township building. The township also utilizes its website to post links to Watershed Management Progress Reports from 2007, links to the Water Environment Federation, and the GLRC homepage.

Earlier this month, the township also experienced a flood warning which the Office of Emergency Management estimated flooding would likely reach Lansing Township businesses on Clippert and Homer streets between Kalamazoo and Michigan, according to a Lansing Township Facebook post from Supervisor Dion’trae Hayes. Flooding is still taking place on the Red Cedar River near the Lansing River Trail. Photo by Hannah Holliday.

Local environmental groups have also partnered with the GLRC to increase the trend of clean water initiatives.

Paul Rentschler, is a consulting ecologist for the Upper Grand River Water shed Alliance and has continuously worked with the alliance since 2007 after helping develop the watershed management plan.

The alliance also partners with the Middle Grand River Organization of Watersheds (MGROW), called the Grand River partnership. Their principal activities together include coordinating and planning with the Michigan Department of Natural Resources and planning for the next Grand River Expedition in 2020, according to Rentschler.

“My favorite part of my involvement with the Alliance is the people involved, Rentschler said. “They are a mixture of artists, politicians, paddlers, teachers, environmentalists, scientists, engineers, business leaders, municipal and agency staff, etc., all with a love for the river and an interest to see it protected and improved.  They also see it as a key feature in the economic revitalization of their communities.”

To learn more about Lansing Township’s involvement with the GLRC and their public education plan, click here.