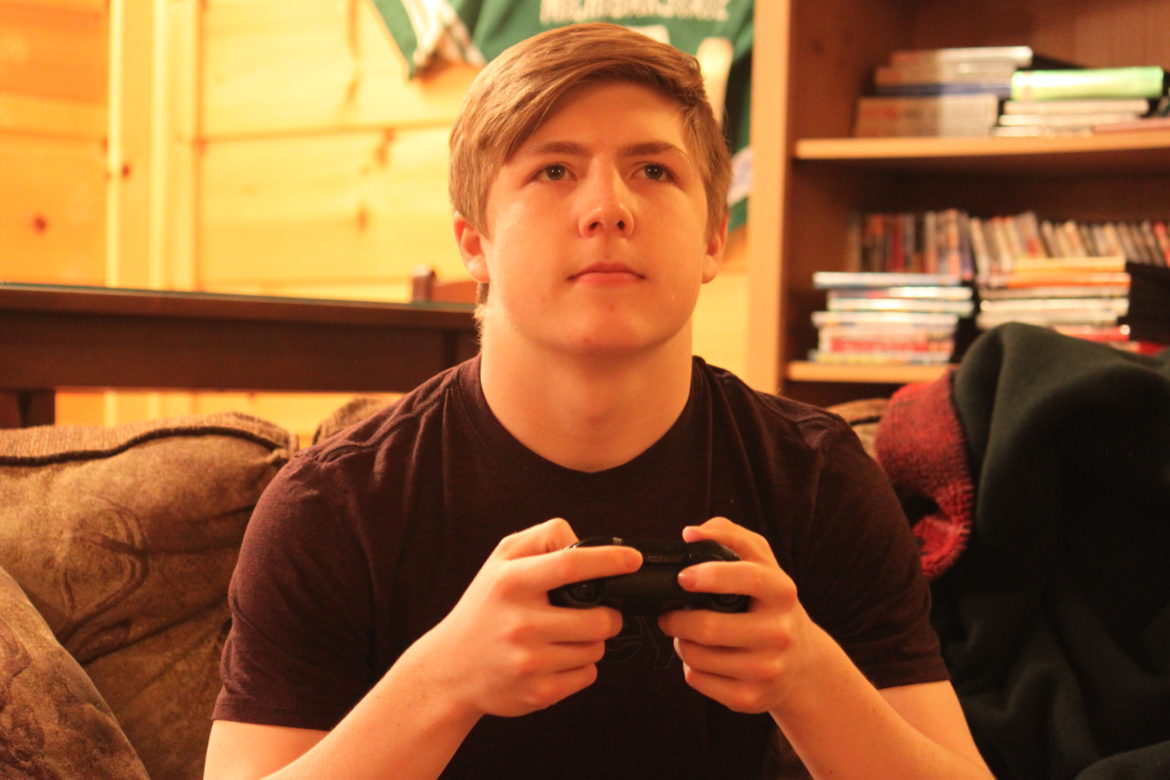 Video games are a way for students to relieve stress before their last set of final exams.

“Patrick! Time for school! Patrick! You don’t want to be late again do you? You’ve missed two days of school already this week.”

Patrick O’Donnell, a senior at Grand Valley State University, remembers his mom yelling this on several different occasions during his senior year at Haslett High School. O’Donnell feels that his college senior year is going the same way, but this time he doesn’t have his mom checking in and waking him up from his senioritis. High school and college seniors turn on Netflix and television more often when school is coming to a close.

“When your four years start coming to a close at any school it is really difficult to remain focused when everyone around you is talking about what they are doing after college and everyone has their mind on the future,” O’Donnell said.

Everyone that has had any type of schooling has probably heard Mrs. O’Donnell’s parental call at some point or another. Senioritis isn’t a new term; however, doctors and psychologists have noticed it seems to be affecting more students and their behavior.

Dr. Stacey Bieke, and Dr. Robert Kender, both psychologists at Abaris Behavioral Health, have dealt with students losing motivation and having a lack of purpose toward the end of their high school and collegiate careers.

Bieke and Kender agree that senioritis is out there and is a “condition” that has been talked about since they were in high school. However, there has not been any support or findings for senioritis being coined a real medical diagnosis.

“For college and high school students ‘senioritis’ is a real phenomenon and the kids do go through it. But when it comes to prescribing students medication and putting the term in the medical dictionary, that has just not happened yet,” Bieke said. Now, senioritis may not be medically diagnosed, but this does not mean mental health and your surroundings don’t play a factor. Kender described senioritis as “situational depression,” which can affect some people in different ways. Some students may become tired more often and believe life is a drag as their education career comes to an end. These are usually the cases both psychologists will see and therapy discussions can help the students get back on the right track.

“A lot of patients that come my way regarding these lack of motivational times are focusing on what’s the point of trying if I’m already in college or some get very upset about their academia coming to an end after all of these years,” Kender said.

Kender continued by saying that the kids lack of effort can also be triggered by the surrounding distractions in their lives.

“Kids turn to video games, watching TV, and playing on their phones more during this stage in their life. The weather is also getting warmer, so kids are losing even more motivation to stay inside and study or do homework,” Kender said.

Tommy Twardecki, a graduate of University of Detroit Mercy and a graduate of Michigan State University, has experienced senioritis on two separate occasions. When he was accepted into MSU’s grad school he did the bare minimum required at UDM, and in high school he had a very similar experience. Video games are a way for students to relieve stress before their last set of final exams.

“I actually picked my schedule at the end of my senior year of high school to be very easy so it would be easier for me to handle the senioritis and lack of motivation that so many of my friends and elders warned me about,” Twardecki said.

Twardecki, along with Bieke, believes “senioritis” has spread to more individuals in recent years, and it has a lot to do with the instant-gratification-society we are living in.

“I definitely believe senioritis is being talked about way more than it used to and I think a factor that plays a role in that is the demands that parents put on their children nowadays,” Bieke said.

Twardecki says that the reputation the millennial generation has gotten affects the senioritis stigma as well. Millennials are already viewed as lazy and unmotivated by older generations and this plays a major role in students developing senioritis tendencies.

“I think a possible solution for the ‘senioritis epidemic’ would be to give seniors in high school more days and college seniors should have to take fewer credits in their final semester. Senioritis will always be a thing but this could possibly limit how fed up students get when they’re coming to the end of their education,” Twardecki said.

Whether senioritis is real or not, colleges have started to take notice with students slacking off and getting poor grades at the end of their senior years in high school, and it has resulted in college enrollments being revoked. A study done by the National Association for College Admission Counseling, found that 22 percent of colleges had revoked admissions offers in 2009.

This is a new phenomenon that colleges are now recently enforcing. If admissions offices notice a dramatic slip up in behavior and grades they have the right to revoke students’ acceptances. Bieke says that students that suffer the most from senioritis are the ones lacking coping skills.

“When it comes down to it, the effects of senioritis are an imbalance between work and play and it falls under the battle of nature versus nurture. The students and individuals are letting the environment and surroundings affect how they normally behave. I see it way more now with the addition of smart phones and distracting technology at the palm of students’ hands,” Bieke said.

Although senioritis isn’t officially a medical diagnosis, psychologists and students agree it is very real, and nowadays everyone has to push through the difficulties at the end of their academic careers. The nature versus nurture battle amongst environmental factors must be in control because there have been several cases where a severe case of senioritis has affected an individual’s future.