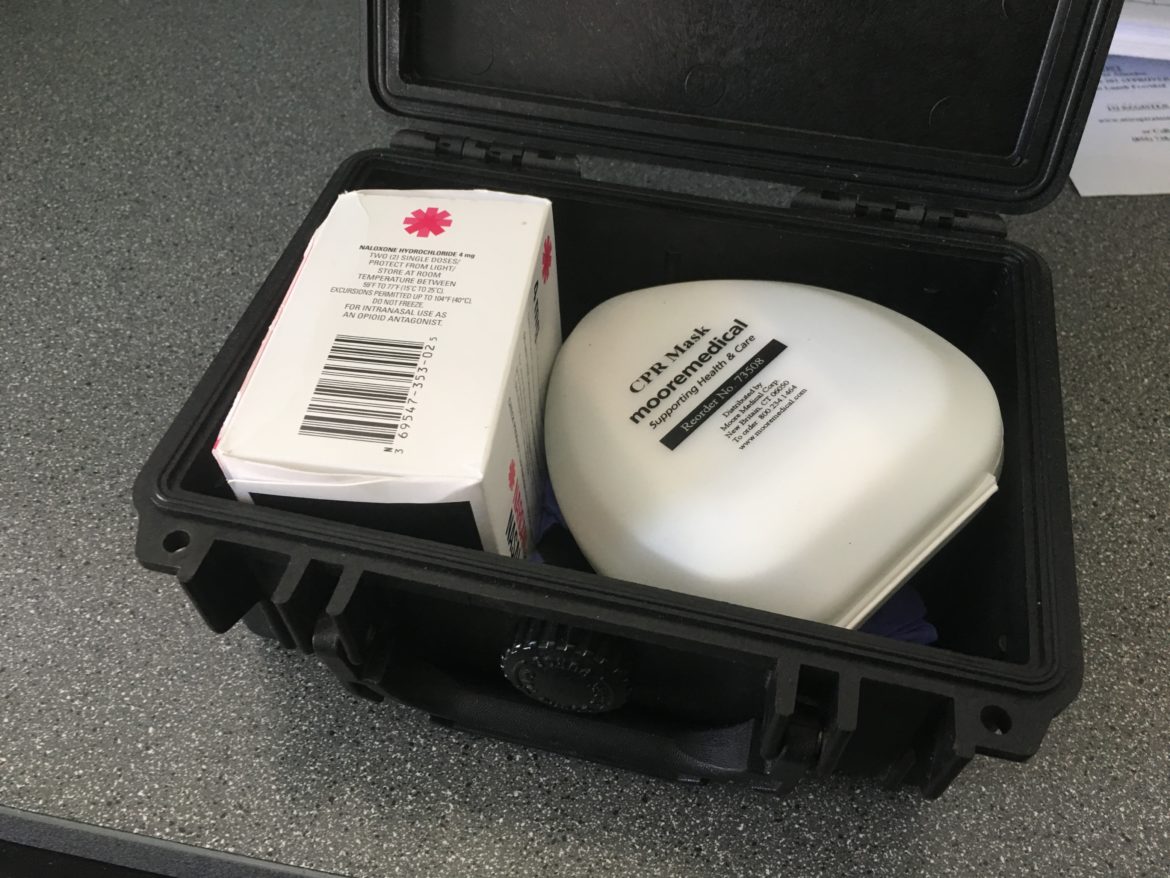 One of the pre-assembled Narcan kits provided to the Lansing Township Police Department. Narcan is a drug that counteracts the effects of opioid overdose and can be administered by first responders to save lives. Photo by Casey Harrison.

When Matt Birr began his tenure at the Lansing Township Police Department over 10 years ago, he and his department seldom responded to calls of opiate- and opioid-related overdose calls.

From the abuse of prescription medications like Vicodin or Oxycontin to hard street drugs like heroin, Birr — and officials all around the state — have seen staggering spikes in drug overdoses to the point where Gov. Rick Snyder has declared the issue an epidemic.

There were 74 total opioid-related deaths in Ingham County alone in 2016, an all-time high. Birr said the department, which also responds to calls in other municipal jurisdictions, can respond to one heroin-related overdose a day. Sometimes more. The number of opioid-related deaths in Ingham county from 2003-2016. Data source from the Ingham County Health Department. Graphic by Casey Harrison.

“Since the heroin epidemic it’s been a common, almost daily occurrence that we respond to an overdose call,” Birr said. “Sometimes its multiple calls a day depending on what the situation is. You usually know when a bad batch is hitting the street because people are using it and the next thing you know paramedics are responding because of an overdose. You’ll have multiple types of those for the next few days until the supply chain runs out and the next batch comes in.”

Birr said he thinks the spike in heroin overdoses can be attributed to new, more potent opioids are mixed in with heroin batches. Last September, the Michigan Department of Health and Human Services, or MDHHS, and the Michigan State Police warned residents carfentanil has been circulating within the state.

How it originated and why it’s getting worse

The MDHHS claims carfentanil is used to tranquilize large animals and is not approved for human consumption because of its potency.

“Opioid and heroin use have deadly effects and the introduction of carfentanil into the drug supply makes the potential for fatality due to overdose even greater,” Dr. Eden Wells, chief medical executive of the MDHHS said in the release. “Michigan residents need to know that carfentanil is a real danger to our communities, and its consequences are fatal.”

When these drugs are mixed together, or combined with prescription painkillers, the result can have adverse health effects. Even after one try.

“These can also result in mixtures or cocktails of drugs, many of which can be highly addictive or highly fatal with just one overdose,” said Phillip Schertzing, instructor and director of MSU Global Community Security Institute in School of Criminal Justice.

Lansing Township Police Chief Adam Kline believes it’s too easy for many people to get their hands on these drugs. And it starts with prescription abuse.

“The drug is cheap,” Kline said. “It’s rampant, and it starts with opioids and prescription pills, and then moves into, if you can’t get those, then you go to the streets where they might be a little cheaper, but it can be mixed with a much stronger drug and they end up dying.”

Birr says carfentanil is actually cheaper to produce than heroin, and are easier to smuggle, making it more attractive to drug dealers and cartels because it ups the potency while affecting the total volume sold — which can appeal to addicts. Furthermore, Birr says the market for heroin has been flooded since the Taliban left Afghanistan. According to Birr, the Taliban prohibited the growth of poppy seeds and opium, key components to making heroin.

To combat fatal overdoses, Kline said officers are equipped with Narcan kits. Narcan is a drug that acts as an antidote that reverses the effects of many heroin and opioid-related overdoses if it is administered quickly enough.

According to Kline, most of the funding for Narcan kits come from private donations, which are always appreciated by the department.

“It doesn’t cause any harm if it is administered during any other overdose instead of a heroin overdose,” Kline said. “The medicine really has no ill effects, it only saves lives. I make sure the officers have what they need to save lives.”

Lansing Township was one of the highest regions for Narcan doses in Ingham county last year. Map of Ingham county and the postal codes where the highest frequency of where Narcan was administered in 2016. Data and map from the Ingham county health department. Illustration by Casey Harrison.

“It’s gotten to a point where pretty much every department in Ingham county, all of the road officers are being given Narcan kits,” Birr said. “Because it’s become such an epidemic and quite often you’re responding to a call from a parking lot and someone sees someone passed out behind the wheel. You go back a few years and think someone just tied one up and fell asleep behind the wheel, well you’re not thinking so much of that anymore but that it’s going to be a heroin overdose and quite often it usually is.”

According to Schertzing, Narcan is a medical breakthrough and is needed in almost every law enforcement vehicle. In 2015, officers administered Narcan in 242 incidences and 255 in 2016. According to the Opioid Surveillance Report from the county, those numbers are expected to rise in 2017.

“These are life or death calls for a lot of these peoples,” Schertzing said. “They need to have a counter-measure drug administered right away, they need to get to a hospital right away. That’s really tying down a lot of resources for urgent types of calls. Then there’s also the criminal aspect: who’s manufacturing it, who’s distributing it and things like that.” Number of Narcan incidences in Ingham county from 2015 and 2016. Data provided by the Ingham County Health Department. Graphic by Casey Harrison.

One of the biggest issues first responders face when addressing emergency overdose situations is the lack of resources provided to them. As the epidemic proves to be more rampant, police officers are required to administer more Narcan with a higher sense of urgency.

“Officers jobs have changed a little bit because they never had to do the medical components, but because they’re there first and on the road and ready to go these are instances where seconds can be people’s lives,” Kline said. “I think they all take a sense of pride when they do it because they’re saving someone’s life and that’s what they signed up for with the job”

Kline said he thinks the problem runs deeper than that as well. From personnel costs to treatment and facility fees, everybody involved with the response and rehabilitation process need help in order to effectively fight the epidemic that is quickly running rampant.

“We can certainly always use more resources,” Kline said. “We lack on prevention and for treatment centers afterward, drugs to save lives and the interim, all of that is a little bit below where we need to be. It seems like costs are going up, personnel costs, treatment costs, medicine costs, all of those things are going up. We never have enough funding.” “Opioid addiction affects law enforcement, emergency medical services, local hospitals, treatment facilities and community groups, not to mention the people who are hurt by addiction,” Vail said according to a release when the task force was first assembled. “We have come together to share knowledge and expertise, but also to act. This is a complex problem that demands a collaborative solution.”

Help from the state

The new legislation will hold tighter restrictions for physicians and impose disciplinary action if the prescriber is not obtaining reports from MAPS and increase penalties for physicians and pharmacists who wrongfully prescribe, dispense, manufacture or distribute controlled opioids.

“Michigan has taken an active role to help save lives and provide second chances to Michiganders by working to prevent overdose deaths,” Snyder said in the release sent out by his office. “While we’ve made some progress, people are still becoming addicted and tragically dying from overdoses so our work is far from over. This new strategy focuses on primary prevention in hopes that we can reduce opioid misuse and prevent addiction from occurring in the first place.” A graphic depicting the proportion of drug poisoning deaths by drug type in Michigan from 2009-2012. Graphic by Casey Harrison.

Schertzing said he believes the new regulations are long overdue because he believes the abuse of prescription opioids are usually the gateway to harder drugs on the street. With the new rules in place, it can be harder to develop an addiction to painkillers if physicians and pharmacists are held to higher standards. The total number of prescriptions written and proportions of opioids and non-opioids prescribed in recent Michigan overdose deaths. Graphic by Casey Harrison.

But the problem this epidemic is causing stems far more than just a Michigan issue. The CDC suggests that in 2015 Michigan was one of 19 states across the country to see a significant rise in drug overdose deaths from the previous year.

For Lansing Township and the state, there is more work to be done before the epidemic is solved.

“It’s more of a statewide issue,” Kline said. “They are increasing. It’s not just a Lansing Township or Ingham county thing, it’s happening all over the state. I’ve noticed a continuing increase since my time in southeast Detroit to now here in Lansing, so it’s not really unique to Lansing.”