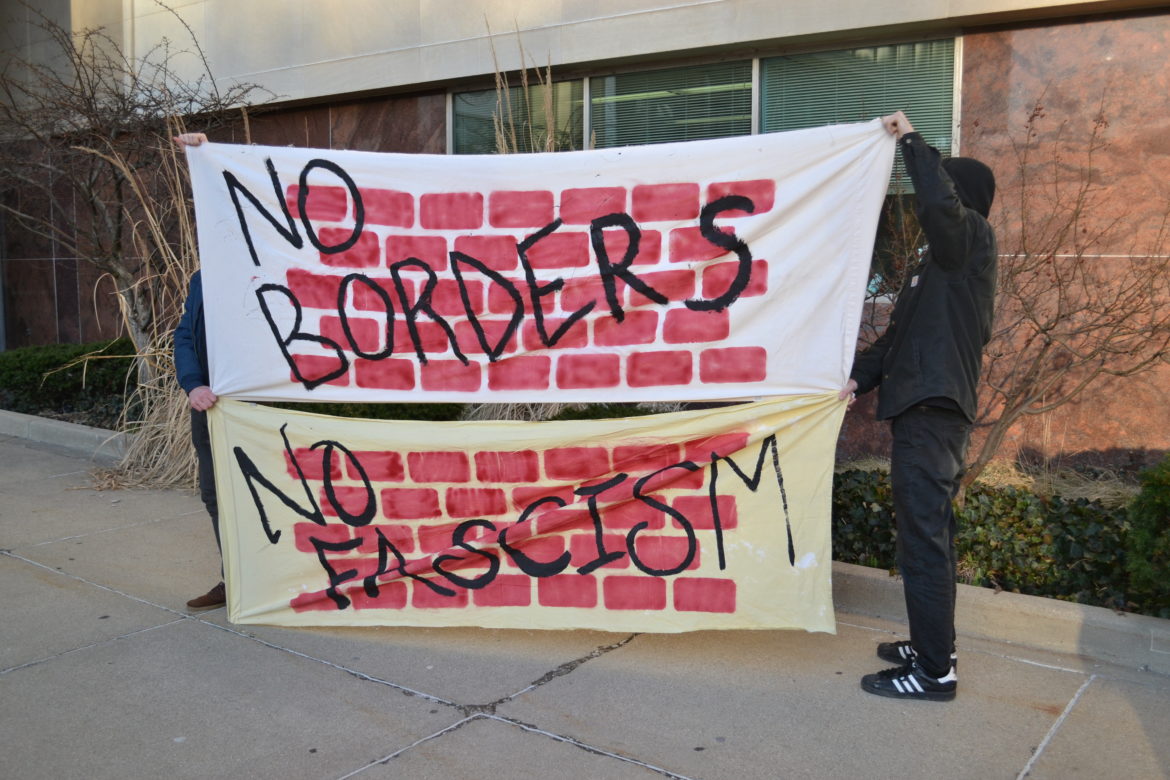 Lansing residents stood outside of the city council meeting on Monday, Feb. 27 with a banner to show support for a sanctuary city resolution. Sanctuary city supporters stand outside of the city council meeting on Monday, Feb. 27 with a banner to show support for a resolution. Photo by Taylor Skelton

The Lansing City Council continues to delay actions that would declare Lansing a sanctuary city.

“We are still on hold,” Clarke said.

While Lansing continues to hold off with a new resolution on immigration policies, earlier this month East Lansing affirmed a resolution declaring the city a safe haven for refugees.

“When you’re stopped, its not automatically that you’re asked for your citizenship status,” Clarke said. “It also talks about making sure we commit city resources and work in concert with our regional partners to embrace all of our immigrant population.”

Assistant director for Michigan State University’s office for International Students and Scholars Brooke Stokdyk says resolutions like the one in place in East Lansing mean you will not have local police trying to interpret documents that they do not understand.

“One of the most confounding things about immigration status is understanding that the visa stamp in the passport does not tell you how long somebody can stay in the United States,” Stokdyk said. “There are plenty of people on campus here who have a visa stamp and a passport that is expired but they are legally present because the visa stamp is only an entry permit. It only has to be valid on the day that somebody is entering the United States. Depending on what status they are given when they cross into the United States, they may have varying permission to stay.” Lansing has already declared itself a “welcoming city” but some residents believe that the current polices in place are not rigorous enough when it comes to supporting the immigrant population.

Lansing resident Jake Masencaud stood outside of the city council meeting on Monday, Feb. 27 with a banner to show his support for a sanctuary city resolution.

“I think that we need to continue as a public to be here to put pressure on the council to do more to protect vulnerable people in our communities,” Masencaud said.

He believes the issue on hold goes beyond Lansing becoming a sanctuary city.

“We’re here to show that the idea isn’t just about sanctuary cities right now,” Masencaud said. “It is also about how borders are drawn in the first place. More or less, the issue around sanctuary stuff has to do with what we think of as immigrants here in this country.”

Lansing resident and member of Lansing’s branch of By Any Means Necessary (BAMN) Mikey Taylor also believes the prolonged concerns in the community are more than a local issue. Groups gather outside of the Lansing City Council meeting on Monday, Feb. 27.

“In the mean time we are not vulnerable as a city,” Clarke said. “We have got some things in place that are going to protect our citizens. It is just not to the point. The only thing that we don’t have right now is that cooperation with federal agents and so on.”