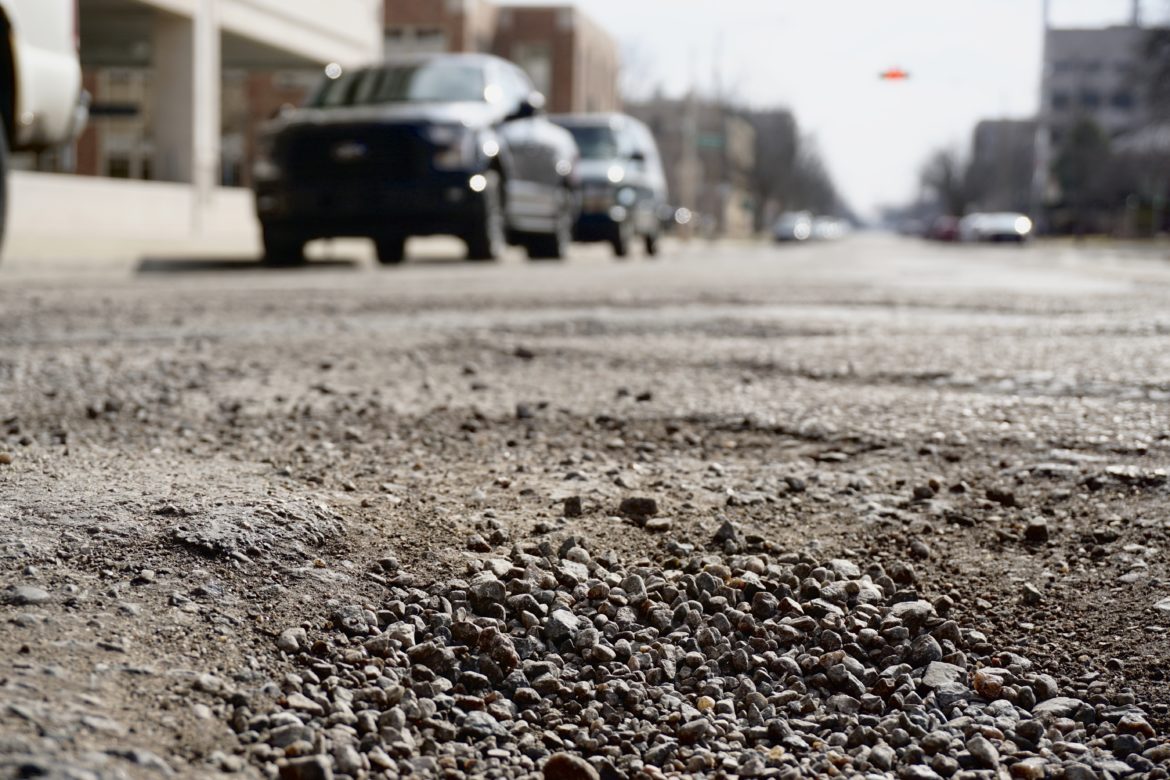 One of the potholes on Townsend Street.

You’re driving to work with your eyes peeled for texting teenagers, but in the dim morning light you can’t make out a new pothole before it swallows one of your front wheels in a single, expensive blow. Similar experiences can cost other Lansing residents anywhere from $60 to over $800 for repairs ranging from front end alignments to new wheel replacements and more. One of the potholes on Townsend St. Photo by Lukas Eddy

Potholes can be the results of salting the roads over winter and harsh fall and spring refreezing conditions. In extremely low winter temperatures road salt loses it’s effectiveness, so the melted ice water that flows into small cracks in the pavement can freeze and expand, weakening the road structure.

In the fall and spring when temperatures fluctuate around the freezing point, water flows into small spaces where it freezes and expands, damaging the road. Cars then disturb the weakened surface and create potholes.

Another possible reason for damaged roads, according to retired Director of the Keston Institute for Public Finance and Infrastructure Policy at the University of Southern California Richard G. Little, is that having heavier and more frequent traffic than intended. Little offered additional explanations for the road decay that can be found all across the U.S.

Liskey’s Auto and Truck Service near downtown Lansing is, among other things, the primary wheel alignment service provider in the area. While driving on damaged roads is something that few enjoy, Liskey’s Service Writer Bill Dawson does recognize the business it generates.

“The roads have been pretty constant over time,” Dawson said. “But over last few years when the roads have really gone to pot… it’s been alright for us.”

According to Dawson and to Trevor Badgley at Badgley’s Garage, it’s often hard to tell whether damage to a car is caused by a specific pothole or if the cause for repairs is due to gradual degradation over time.

“It’s hard to say,” Badgley said. “Damage can happen over time and a pothole is the only reason people notice it.”

Liskey’s and Badgley’s are located in the Lansing area. Mapping by Google Maps. Graphic by Lukas Eddy.

Badgley said the most common road-related repair maintenance he sees is wheel alignment. At both Badgley’s and Liskey’s, alignments typically range from roughly $60 to slightly over $100 and take a few hours, so you can have your car back the same day.

Dawson said the most common actual damage he sees is a bent wheel. Even straightening a bent wheel generally doesn’t take more than a day, but can be more expensive in the $100 range.

“Usually the wheel takes the brunt of the force,” Dawson said. “Most of the time we can straighten them.”

However, if the damage is bad enough that a whole new wheel is needed, the cost can skyrocket more than four times higher. Dawson and Badgley said that new wheels can be $400 to $800 and sometimes even more for more special wheels.

Badgley also added that many new cars now have more complicated suspension components that are designed differently from older units, so they take longer to service and are more expensive. One of the larger potholes in Lansing. Photo by Lukas Eddy

Lifelong Lansing resident Lindsay Noyola has spent roughly $2,000 on her car for road-related repairs during her time driving in the area. While she has only had to get one alignment so far, the actual repairs she needed were far more costly.

“It’s hard to say if the roads have gotten worse because some get patched up,” Noyola said. “The last five to ten years [the potholes] have been most noticeable.” A vehicle on the lift for maintenance at Badgley’s. Photo by Lukas Eddy

“If you don’t maintain the roads they’ll go into a non-maintenance state… where you’ll be pulling up the whole roadway,” Little said. “The problem is if you’re not spending money on a regular basis to keep stuff up, the infrastructure ages and all of a sudden – bam – the infrastructure fails very quickly in a short period of time.”