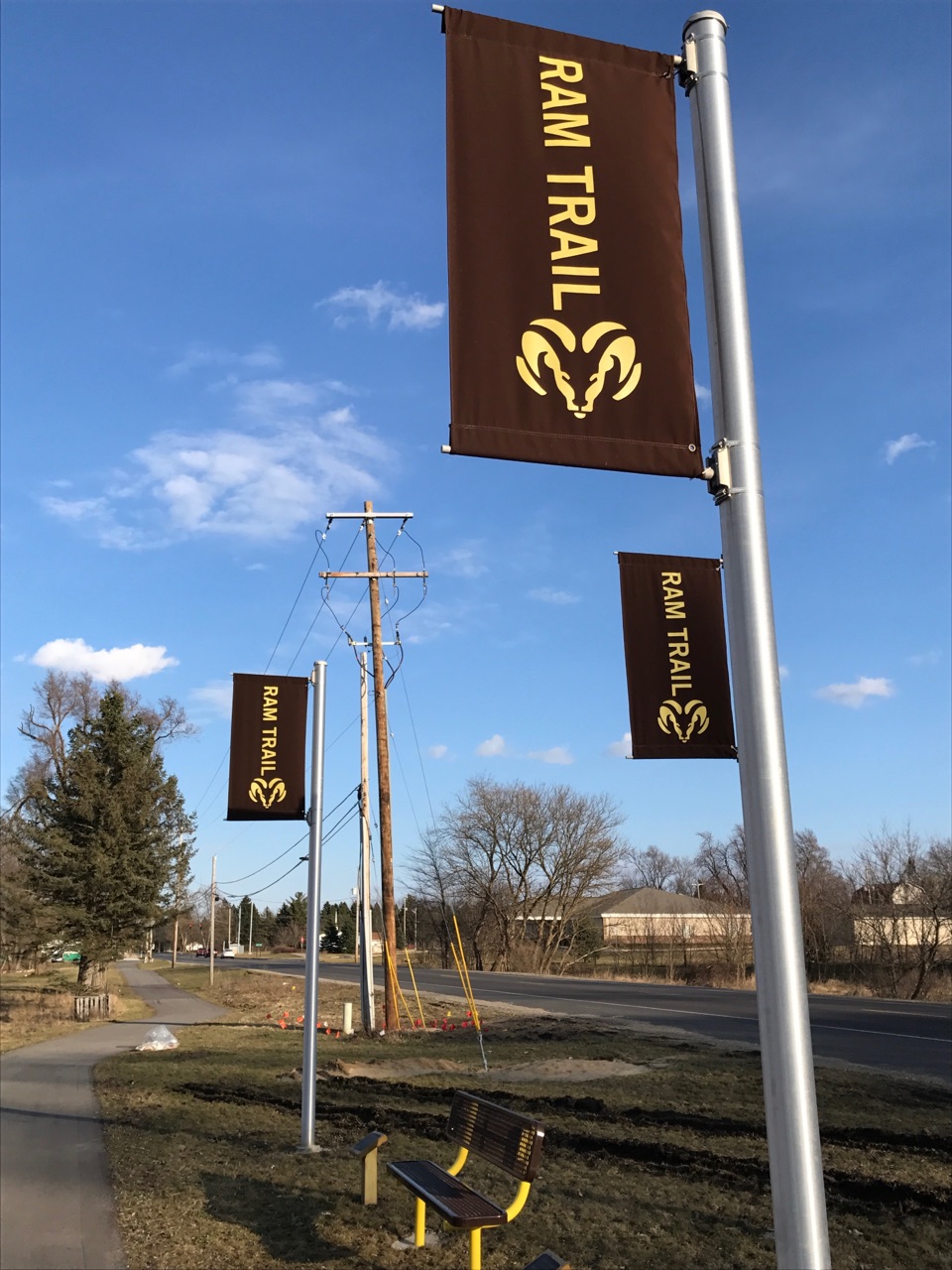 Delhi Township has just completed the fourth addition to its trail system. It’s being called the Ram Trail.

The Ram Trail begins at Eifert Road and runs westward all along Holt Road. It connects the western section of Delhi to the downtown area of Holt, including many neighborhoods.

“The Ram Trail is actually a 10-foot-wide, non-motorized pathway,” said the Delhi Township Director of Community Development, Tracy Miller. “This distinguishes itself from a sidewalk because it encourages the use of bikes and other non-motorized transportation methods, in addition to just pedestrian use.  We adopted a non-motorized master plan in 2007, which was really the beginnings of our commitment to trail construction and encouraging other pedestrian oriented transit.” A map of the Delhi Township Trail systems that run throughout Holt, MI. Graphic by Claire Barkholz.

The Valhalla trail was the first of the Delhi Township trails to be established almost 10 years ago, with Sycamore Creek opening in 2014, and the Ram trail following by being completed this year. The Ram Trail also connects to Holt Road Trailhead Park.

“The Ram Trail is just one more connection,” said Miller. “There are plans being made to build another section of Ram Trail that would connect it to Burchfield Park (Ingham County Park).  There are also plans underway that would connect the existing Sycamore & Valhalla Trails to the Hayhoe Trail in Mason.  The Sycamore trail, which was completed several years ago, connects to the Lansing River Trail.”

Miller says that the Holt community loves the trails, and has been getting good use out of them.

“I know from my own experience that it is an incentive to get out and explore more of Holt,” said Holt High School principal and community member Michael Willard. “My kids always want to ride on the trails to go see things and play at the playgrounds.  I like the safety it gives me to allow them ride their bikes and not be in the road.”

Holt doesn’t have a significant downtown area, but instead a couple of strips of businesses along Cedar Street and residents’ homes in the surrounding area.

“The trails are a key part of our place-making efforts,” said Miller. “We believe that this type of infrastructure plays a key role in getting residents out into the community.  When people get outdoors to recreate, they meet others and develop connections.  This sense of belonging and place is essential.”

Sidewalks, while most times getting overlooked, play an essential role in the establishment of a community. The Ram Trail that runs along Holt Road. in Holt, Mich. Photo by Claire Barkholz.

“Sidewalks denote the emphasis and encouragement to use non-motorized travel, especially walking,” said MSU Urban and Regional Planning assistant professor, Zeenat Kotval-Karamchandani. “The presence of sidewalks is the first step in that direction, but it is not the only step.  Sidewalks allow for a richer pedestrian experience, allow for a healthier lifestyle and is a key component in urban design.”

According to the 2015 Census the average Holt resident commutes 25.9 miles to work. Holt is a bedroom community, meaning that since it is a suburb of Lansing, most people that live in Holt commute to work.

“Those used to and interested in traveling via their private vehicles and having large personal spaces, would like suburban living environments,” said Kotval-Karamchandani. “Those that like to be near the action and the hustle-bustle of life would like to live in the urban core area.” The Ram Trail on Feb. 26. Photo by Claire Barkholz.

Willard explains that he thinks these trail systems have helped to get people out of their houses and into the community. They have provided a place to exercise as well. He and his family have gotten a lot of use out of the trail systems because they run right up behind his neighborhood.

“I’ve personally rode all the way to Potter Park Zoo,” said Willard. “I think these have helped to make the people of the Holt community want to get outside and explore.”

The future plan is to link the majority of Delhi Township with joined non-motorized pathways and to connect those pathways with the trails of nearby communities.