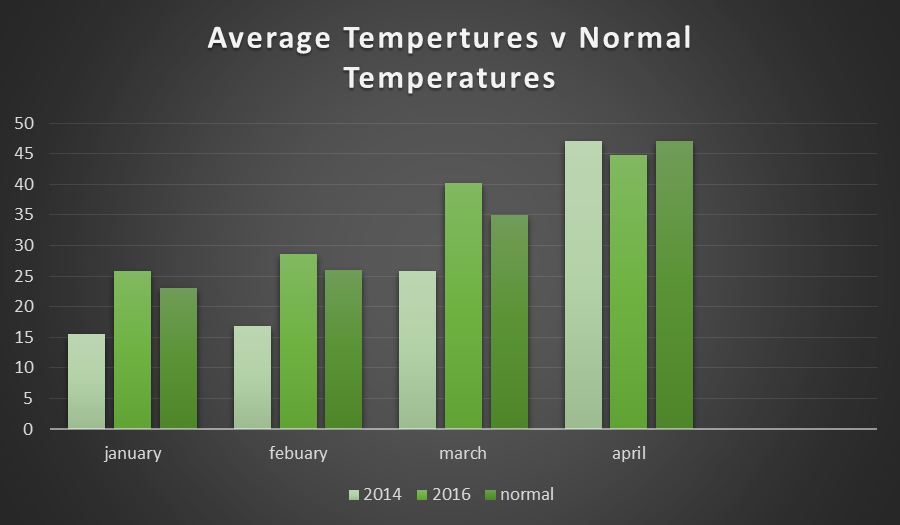 On Feb. 27 there was a high of 51 degrees in Lansing, and this is what it looked like outside.

The normal frigid February seems to be a lot warmer this year in Lansing, leaving residents wondering what’s causing the sudden change.

The normal temperature throughout February in Lansing is about 26 degrees, but this year temperature skyrocketed to highs of over 50 degrees for several days. Even consistent 40 degree weather in February isn’t textbook, because Lansing and Michigan are usually in the thick of the snow this time of year.

In the past years the scientific community and environmental activists having been warning people about the effects of global warming not only in the United States, but the entire world.

While some people would attribute this new sense of winter to global warming, others aren’t so quick to place the blame.

“You don’t need to be a meteorologist or climatologist to tell that this winter has be warm. Indeed, 2016 was the warmest year on record, and many high temperature records have been broken in February around the country,” he said.

According to the Environmental Council, temperatures in Michigan have risen by less than 2 degrees since the 1980s and are projected rise 2 to 7 degrees by the end of the century. If the temperature continues to rise during the winter it can cause lower lake levels, change in precipitation, agricultural conditions and it can decrease biodiversity. “El Nino and La Nina can have distinct impacts on temperature and precipitation on different parts of the world including the U.S. Following the strong El Nino is 2014-2015, the week La Nina during the winter suggests that we will see a warm dry winter in the south and possible wetter conditions in the Midwest. So what we’ve seen is sort of what we expect, but maybe a bit warmer than expected warm winter,” he said.

According to the National Oceanic and Atmospheric Administration, The El Nino is known for the uncharacteristically warm ocean temperatures in the Pacific Ocean, in contrast to the La Nina which is differentiated due to cold temperatures in the ocean. Greenhouse gases warm up the Earth, the ocean absorbs that heat and then El Nino makes the temperature rise. However, this change in temperature can cause severe weather around the world, making certain areas like the Northern U.S. drier and warmer, while other seem to get plenty more rain.

Just to put in perspective what severe weather can bring to a place, from 1980-2012 there were 9-16 different weather disasters that cost over a billion dollars in damage, according to the EPA. In 2014 winter was bad for the whole state of Michigan. According to U.S. Climate Data, there were two cities with temperatures under 40 degrees and only three cities didn’t hit their coldest day in history, one of which was Lansing. Even though it wasn’t the coldest winter ever for the city, Lansing had snow depths as large as 18.90 inches and the highs for the day reached as low as 2.1 degrees. The coldest months being January and February that year, lows were below minus-10 degrees several days with temperatures of minus-12.8, minus-11.7 and minus-10.8 degrees.

Twenty-one-year-old Ciara Johnson moved to Lansing in September of 2013 for a new job opportunity from Washington D.C. Johnson said that in the coming months she wasn’t prepared for a winter that bad, and that it was honestly eye-opening.

“The winter that year was so bad, I just moved to the city and was expecting something pretty mild with a few bad days from what people had told me. But, wow was I shocked. If you stepped outside for too long you literally could get frostbite that year,” she said. In early 2017 winter seemed to be just as mild as last year, until continuously we’ve seen warmer and warmer days in February.

Lifetime Lansing resident Debryan Threatt said this is the warmest winter she can even remember in the city.

“I’ve never experienced a warmer winter, especially during February here in Lansing. It’s crazy to think we’re in the middle of winter and I’m talking to you in shorts right now,” Threatt said. “Or that nowhere my mind am I thinking I’ll need to go home and put my puffy (coat) on. It’s refreshing, but it also make me think will winters always be like this? I’m kind of hopeful, I guess I have global warming to thank for that.”

Threatt’s question is something other residents asked as well, a very valid question for the future of Michigan. Luo said it’s possible, but unlikely.

“Because of internal variability, we can have two or even three warm winters in a row statistically. But we will definitely see colder than normal winters in the near future,” he said.

“The only way you could really argue that this is directly related to global warming is through some sort of statistical thing. It would be this likely under the pre-1950 and it would be this much more likely under our current climate using simulation,” Moore said. “That’s the only way you can attribute it. I don’t like attributing a weather event to an instance, it’s too local. It’s global warming, not Michigan warming.”