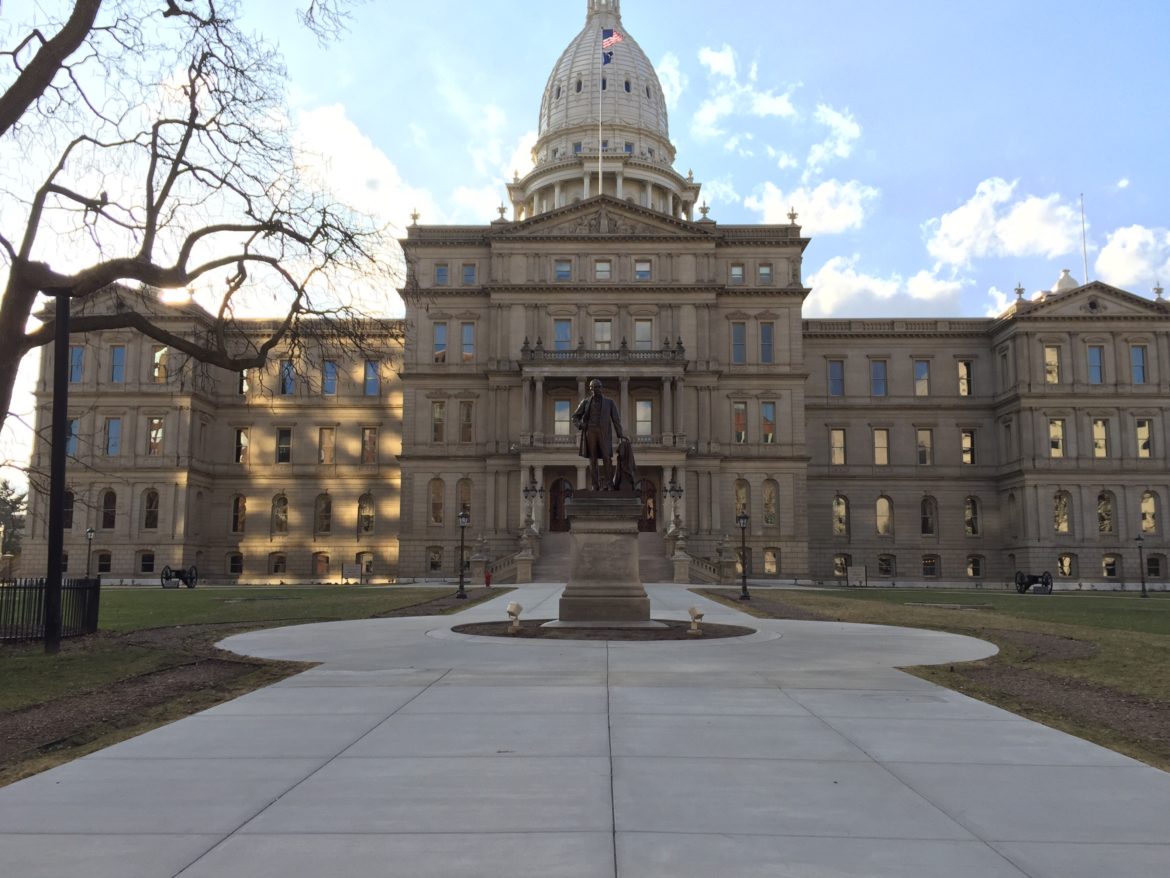 Landscape view of the Michigan State Capitol in downtown Lansing. It would not take a Michigander to point out the Michigan State Capitol building in downtown Lansing. Perhaps this is because its architect, Elijah Myers, designed it so closely with the U.S. Capitol. Both are centered with a white dome, sandwiched by a right and left wing. Is this a coincidence? Matt Van Acker, the Capitol Tour and Information Service Director, thinks not.

“He (Myers) was one of the first architects to use the U.S. Capitol as a model for a state Capitol,” said Van Acker. “The U.S. Capitol, the dome, that was actually added during the Civil War. Our building construction started just seven years after the war in 1872.”

One of the most notable parts of Myers’ design is the glass floor in the central rotunda. Van Acker believes that Myers used this model simply because it was unique and unusual. The glass floor also depicts an optical illusion. As tourists climb higher up the building and look down the railing, the floor creates an inverted dome style, or as Van Acker put it, a big cereal bowl.

“There are 976 pieces of glass, none of which is over an inch thick,” said Van Acker of the glass floor. “But it’s really kind of an unusual feature… People were here 30 or 40 years ago and the one thing they always tend to remember was that glass floor.”

“The decorative art. That’s really what our Capitol is most known for,” said Van Acker. “We have over nine acres hand painted designs. An acre would be the equivalent of a football field, so if you could imagine painting nine football fields by hand. That’s what was accomplished here. It’s probably one of the best examples of Victorian artwork… and we think probably one of the most highly decorated buildings in the country.” View of Inside the dome from the glass floor. Photo taken by Andy Chmura

“During construction, they (the builders) used cheaper products like pine or plaster and cast iron, and then they hired artists to faux finish them to look like the more expensive walnut and marble, and so we have these huge columns that look like beautiful marble when they’re actually metal that have been painted, you know, faux finished… another signature point of our building,” said Van Acker.

The Capitol building is also a historian’s paradise, with features dating back to the 1870’s. One of its richest historical aspects is the old Supreme Court room. Cambray Sampson, a tour guide who works under Van Acker at the Capitol, says that this is one of her favorite parts of the building.

“I really like the old Supreme Court room,” said Sampson. “I just like the beauty of that room. It’s one of the ones we know the most about. It’s got an original ceiling up there, which is pretty cool. The Supreme Court [room] upstairs is not used by the Supreme Court anymore. It’s used as the Senate Appropriations Committee hearing room…one time a year, though, the Supreme Court does meet in there. They hear opening arguments in that room.”

With the history and beauty of the Capitol, one can easily forget that it is, in fact, the workplaces for some of the most important people in the state of Michigan including the governor, state representatives and senators. With this, one would think that security in the Capitol would be tight. Surprisingly, it is not. In fact, there is not as much as a metal detector. This is where Chief Sgt. David Dickson and the the police step in.

“Both the Senate and House, they have their police agencies to serve and protect the respected houses,” said Dickson. “The sergeant-at-arms is what it’s called but it is a state police agency and we are that police agency.” The sergeants-at-arms may appear to act simply as security personnel. But make no mistake, they are police officers, sworn under oath. They are the only barriers that stand in the way from potential disaster.

The Michigan State Capitol is one of 13 just capitol buildings that have been named National Historic Landmarks. Van Acker says that he and his fellow tour guides give around 15 tours a day, but sometimes as many as 30. That equates to about 115,000 people on guided tours per year, not counting those who visit without taking an official tour. With this, it is no wonder that the Michigan State Capitol is, a Van Acker estimated, likely the third or fourth most visited state capitol in the country and the pride and joy of Lansing.