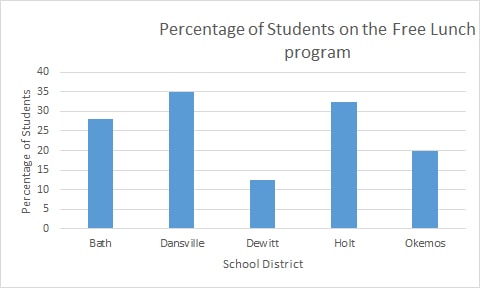 Free lunch programs provide meals for students in need, as well as help provide funding for the school. Bath, Dansville, DeWitt, and Holt Public Schools share similarities in their programs including how they’re reimbursed and how to sign up for the program.

“There is a big need for kids to eat a free meal, at least in our district,” said Cathy Zeeb, the food service director for the Bath District Public Schools

“That might be the only meal they get to eat all day long, it’s necessary,” she said.

Chris Salmon, Food Service Director for Dansville and Mason public schools, echoed Zeeb’s statement, and added another reason why the programs are important.

“The program is important because it give the kids a well balanced lunch, but it also helps fund itself and help with other funding,” Salmon said.

The free lunch programs could lead to Dansville schools getting grant money based off a certain percentage of students receiving free or reduced priced lunches.

“We do it as a service for the students,” said Aurora Anstett, Director of Food Services at Holt Public Schools.

“It helps families that need help. The kids get two free meals, breakfast and lunch. We’re also non-profit so it really is a service for the kids.” she said.

Bath, Holt, Mason, and Dansville schools all receive their funding for the program through reimbursement from the state.

“We go to a federal website and claim the amount of kids, meals we served, and the number of days. The site has a multiplier and gives us reimbursement for each kid,” Salmon said.

Holt schools are reimbursed by the State and Federal governments as well.

“We participate in the National School Lunch Program run by the United States Department of Agriculture, we get reimbursed for all meals we serve, even the paid meals,” Anstett said.

“We also get commodity dollars, which is 29 cents per meal. We use this for food items and produce, it supplements our funds,” she said.

Bath schools are funded through state and federal money, as well as students who pay for their own lunches. They are reimbursed for every lunch they sell.

“This year’s current reimbursement rates are $3.22 for each free lunch, $2.82 for each reduced, and 36 cents for each paid lunch we sell,” Zeeb said.

DeWitt schools are partially funded through the government. They follow the federal guidelines to be reimbursed.

According to Carol Burns, the Administrative Assistant at DeWitt Public Schools, the food service is run by Chartwells.

“Our director works for them, and follows their menu options,” Burns said.

Chartwells is a food supplier that partners with schools.

SodexoMAGIC, LLC is a partnership between Sodexo, a corporation who focuses on quality of life services, and Earvin “Magic” Johnson’s Magic Enterprises. SodexoMAGIC focuses on getting students in need healthy meals.

Bath, Dansville, DeWitt, and Holt school districts determine a student’s eligibility for free or reduced priced lunches the same way, a federal application. The application can be found online at lunchapp.com or can be accessed from each of the school’s district websites.

“The application is given to families at the start of each year, which then gets put into a computer to determine what a student is eligible for,” said Salmon.

“You can fill out the application on paper or online. It explains what the guidelines are and where your income can put you based on the number of people in your house,” Burns said.

“It’s all income based, the USDA sets our guidelines annually, and we do follow the guidelines,” Anstett said.

Another way the schools determine if a student is eligible for the lunch program is the Direct Certification list sent to the schools by the State of Mich.

The list contains names of students who are receiving state help such as food stamps. The students on this list are automatically eligible for free lunch.

“I’ll get the list from the state and merge it with my database. The kids on the Direct Certification list are automatically on free lunch,” Salmon said.

“I get a new list every month, it doesn’t usually change,” Zeeb said.

“Lansing public schools use the Community Eligibility Provision to determine who is eligible. Under the CEP, if the Direct Certification list contains at least 40 percent qualify for assistance all students are eligible for the program. Income doesn’t matter,” Taratuta said.

The CEP went into practice about four years ago, according to Taratuta.

“There is talk of increasing the rate from 40 percent to 60 percent,” she said.

Lansing offers both, free breakfast and free lunch for students in the program.

The programs in Dansville and Mason are completely anonymous for the students. They use a keypad which the kids enter their assigned number to verify they’re on the program.

“For the little kids we can click a picture of them on our computer,” Salmon said. The percentage rates of students on the free or reduced priced lunch programs in Dansville, Mason, and DeWitt have stayed steady over the past years.

“We’ve stayed stable the past couple of years. We’re in the mid-30s, which is normal,” Salmon said.

“Our percentage is pretty low. We have 6 buildings and serve over 1,200 students a day. We’re probably between 10 to 15 percent. We’ve stayed steady,” Burns said.

Holt schools saw an increase of students on the free lunch programs back in 2008. The rate is starting to go down.

“During the recession in ‘08 it dramatically went up. Last year we had 37 percent of students on free lunch. This year we’re down to somewhere between 30 and 35 percent,” said Anstett.

Bath schools have seen an increase in the percentage of students on their free lunch program.

“This year we are at 28 percent district-wide. It’s definitely gone up,” Zeeb said.

The Okemos Public Schools District office said 20 percent of their students are currently on the program.

Taratuta said that this is her third year as the general manager, but she has seen about a 4 percent increase.

East Lansing Public Schools were contacted, but did not reply. On their food service page, a link to lunchapp can be found.