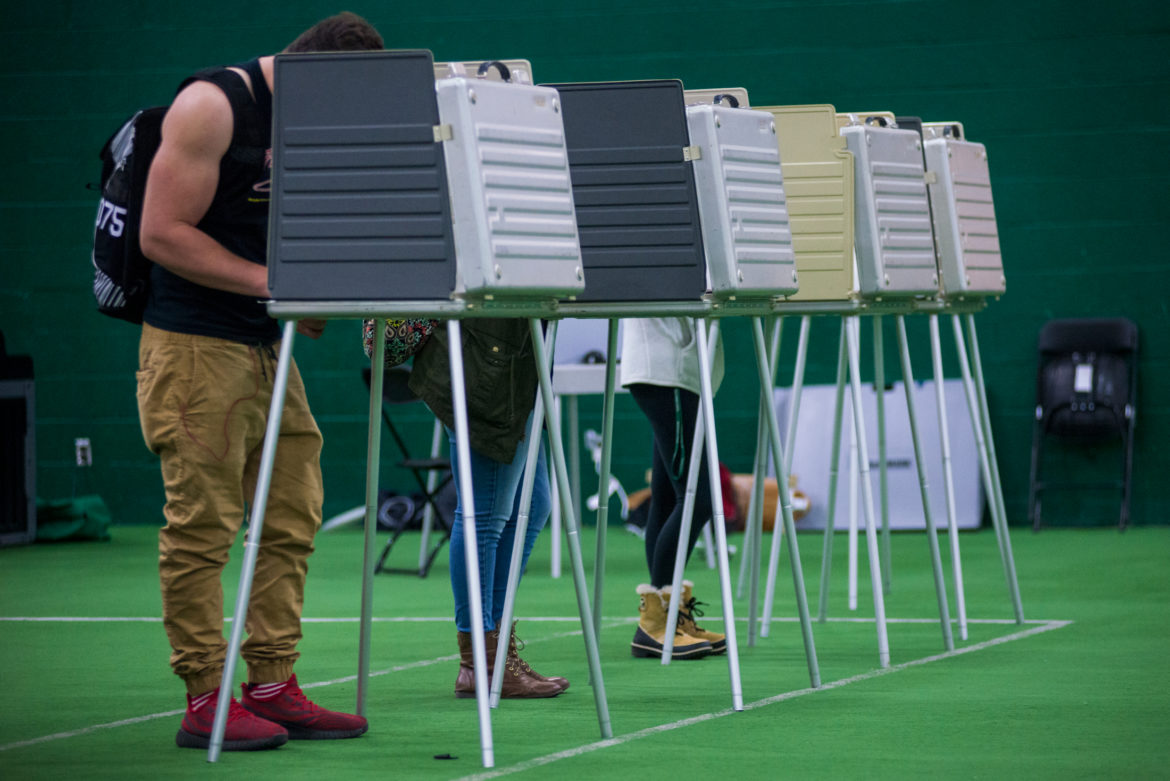 Voters cast their ballots on Nov. 8, 2016, at IM Sports-West. IM Sports-West served precinct 15 and had 1,700 registered voters in the area.

In buildings across Michigan State University’s campus, hundreds of students stood in lines that wound around buildings. The wait to vote was sometimes longer than two hours.

More than 70 MSU journalism students interviewed a variety of voters across the 5,200-acre campus. Democratic candidate Hillary Clinton was the apparent favorite, with 237 of the 357 voters interviewed giving her their vote. Republican candidate Donald Trump received 55 votes.

One of those students was Maggie Sawdey, who did not hide her feelings for Trump when asked about who she voted for in the 2016 election.

“Donald Trump is so xenophobic, misogynistic, racist, sexist, anything you want to put out there,” Sawdey said. “I support that she actually listens to us and has put that down as an issue besides socially liberal stuff.”

MSU student Justin Frommer said voted for Trump because he agrees most of his policies.

“I voted for Donald Trump and Pence because Hillary is a crook and needs to be in jail,” Frommer said. “I like Trump’s economic policy and his past as a successful businessman. His economic policy will greatly impact this country because his view is to keep the big corporations and companies in the United States which will bring in more jobs.”

Other students went with a third party candidate. Lauren Brown, a junior at MSU, said she chose against her usual party.

“I’m a registered Republican and I didn’t want to vote for Donald Trump because I don’t really believe in what he believes in, but I don’t want to vote for Hillary Clinton either,” Brown said. “So I felt that voting third party would be the best way to represent my party’s interest, so that’s what I did.”

Some students found themselves unable to chose between the candidates. Computer science major Julian Ellis said she decided to skip the polls and sit out the election.

“Personally, I believe the election process is supposed to find the best person for the job and when we have two options that I clearly do not support, I am not doing my job as a voter by just picking the lesser of two evils,” Ellis said. “I do not see the purpose of playing a game I’m going to lose.”

MSU senior Justin Schofield believes Clinton will be the best choice for president.

“I voted for Hillary Clinton because she will reform the middle class, she wants to end economic inequality without raising taxes, she wants to protect our environment by attacking climate change and she wants to reform our school systems so that schools in the inner city have adequate resources,” Schofield said.

Pre-med major Keenan Cleaver emails and information about other scandals raised questions for him about Clinton.. Cleaver, who originally was not voting for Trump, submitted his ballot today with Trump’s name checked.

“I realized there were too many background things behind Hillary’s campaign that were dirty and I feel like it outweighs what Trump stands for,” Cleaver said.

Policies are not the only thing students considered choosing between the two candidates. Many students supported Clinton’s view on women’s rights. MSU student Kelsey McLughlin said she has similar views to Clinton.

“I agree with most of the things she believes in,” McLughlin said. “It just works out perfectly for me. She wants pro-choice and I believe that people should have the choice to choose what they want for their baby.”

Ian Paulsen, a student from Battle Creek, chose to vote third party over the primary party.

Angela Kilgore is an anthropology major at MSU, who said she didn’t have any interest in voting.

“I didn’t vote because I didn’t want to,” Kilgore, 21, said. “I don’t let anything political really affect my life. I’m really big for local elections, but I don’t go for big ones.”

Some students voted for Clinton because she was “the lesser of two evils.” This was a common response from students on campus. Elementary education major Emily Levine decided who to vote for based on that exact reason.

“With a lot of the media going on, it’s lesser of the two evils at this point,” Levine, 20, said. “I was raised Republican, but I think some of the issues just gear towards Hillary.”

MSU senior Anna Kouri is a dietetics major who votied for Trump because he has shown support for veterans.

“Veterans are very important to me,” Kouri said. “I am  part of Air Force ROTC, so I really prioritize that in this election and I like his campaign towards veterans and how he plans on taking care of that.”

MSU student Meagan Pederson voted for Clinton because she said Trump is a dangerous candidate.

“I believe she is a much less hateful candidate than Trump and I believe that Trump has the temperament of a 5-year-old and will probably get us bombed,” Pederson said. “Hillary at least has political experience where she knows what to say and what not to say.”