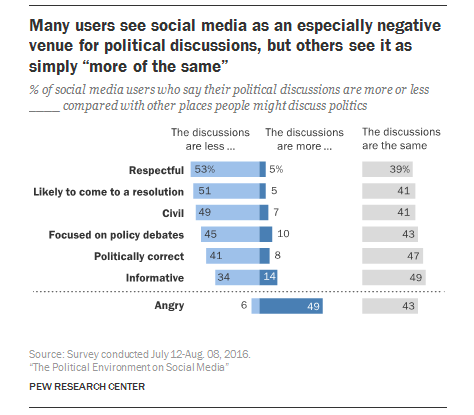 It’s not just you.

Nearly 40% of social media users are exhausted by the amount of political content clogging their timelines, according to a new report by the Pew Research Center, a nonpartisan think tank. And more than half find it stressful to interact online with friends and family members they disagree with.

“A substantial share of social media users feel these platforms are uniquely angry and disrespectful venues for engaging in political debate,” the report says. “Some 40% of users agree strongly with the notion that social media are places where people say things while discussing politics that they would never say in person.”

“I’d rather do the Cinnamon Challenge over and over again while wearing a Michigan jersey […] than have to read one more political post on social media,” he said.

RELATED STORY: How social media almost kept me from voting

In fact, 31% of users said they changed their settings to see fewer political posts and 27% blocked or unfriended users because of an offensive political post.

But some users love engaging online: 20 percent of social media users said they like seeing political posts and discussions – and 15% usually respond with a post or comment, according the report.

MSU student Ben Schroff  told Spartan Newsroom reporter Savannah Swix that he has no problem engaging online and, in fact, has a method for when to comment and when not to.

“If it’s something that’s like unfair, in a way that I see is unfair, or like bias, then I will really go after it,” he said.