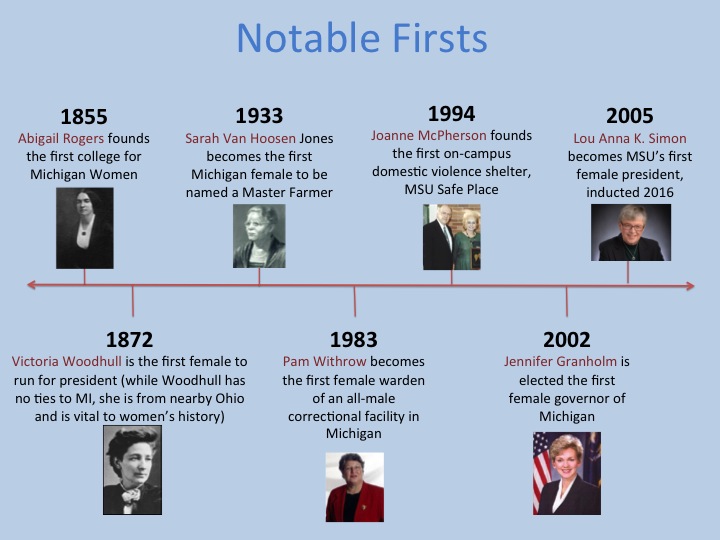 Powerful women who have made notable firsts. Powerful women who have made notable firsts.

Women have overcome obstruction on their way to leadership positions, but plenty of obstacles still exist for women pursuing those roles. Hillary Clinton’s loss in the 2016 presidential election could be considered the ultimate heartbreak in a career of service and fighting to break through a glass ceiling of leadership opportunities, but her campaign for the presidency changed women’s history no matter the outcome.

Lansing native Pam Withrow knows too well the struggle women experience on their way to assuming leadership positions and the criticism once they obtain leadership roles. Pam initially held roles within the corrections field such as prison counselor, program analyst, camp supervisor and warden’s administrative assistant. Then, with only seven years of experience in correctional facilities, Withrow was hired as warden of the Michigan Dunes Correctional Facility. That made Withrow the first female warden of an all-male prison in Michigan. Her position of power did not come without obstacles, though. Withrow said she met a lot of resistance from her male counterparts. The basic issue, it seemed, was promotion. Men in her line of work could no longer be assured of promotion based on seniority and many thought her unqualified for the position. The inmates,

however, did not have an issue with Withrow at the top of the hierarchy.

Fast-forward to 2016. With the first national party-nominated woman to run for presidential office, women’s history has been changed with the 2016 election. Women have already made history books, but the scale of such an accomplishment is groundbreaking and historically valuable. However, the struggles that both Withrow and Rogers faced are the same issues Clinton faced as she ran for the highest executive office. Michigan’s history of powerful women is told in the heart of Michigan’s capital city of Lansing in a small yellow house. This historic building contains the Michigan Women’s Historical Center and Hall of Fame. Among the photos and incredible accomplishments of over 270 Michigan women, many disciplines are well represented.

“It’s a really inspirational place to work,” said Caitlyn Perry Dial, executive director for the Michigan Women’s Historical Center and Hall of Fame. “I can break through my barriers . . . because these women have done that, too.”

“Any story you can think of, we have a woman who represents that story,” said Dial.

Ideals of gender roles can be difficult and uncomfortable to overcome because they are so deeply ingrained, said Dr. Emily Conroy-Krutz, assistant professor of history at Michigan State University.

In the 18th and 19th centuries, there was discomfort in accepting women’s authority, especially in public speaking, Conroy-Krutz said. Women speaking out made both sexes uncomfortable because it was thought of as “taboo” and “unladylike.” In fact, when women spoke to mixed crowds of men and women, it was called a promiscuous audience.

The 2016 campaign was a strong example of women experiencing harsh criticism for pursuing leadership positions and going against the grain. From makeup and fashion choices to her smile, Clinton had criticism in the public arena simply for being a woman. When was the last time a man was told to smile more after a debate? Or the last time a male presidential candidate was faulted for wearing a certain tie? There are some examples, like President Obama’s khaki suit, but criticism of men’s wardrobe is far less prevalent. Unless President-elect Donald Trump wore an outrageous tie or suit at a debate, there most likely will not be criticism about his appearance. But, Clinton’s wardrobe choices receive criticism from her hair right down to her shoes every time she is in public.

“The more like a leader [women] behave, the more they are penalized for not looking like a woman,” said Dr. Michelle Kaminski, associate professor of human resources & labor relations at Michigan State University.

Dana Saunders, a zoology senior at MSU, said she believes Clinton is breaking the mold. She thinks that Clinton’s run for the presidential office will inspire other women in politics to pursue higher leadership positions and overcome gender roles.

Women always face the challenge of assertiveness being called “bitchy,” Kaminski said. That stereotype is due to the fact that leaders are generally thought of as men. Women are seen as less feminine and penalized for leadership qualities for which men are traditionally praised, she said.

However, Kaminski said that women leaders are more likely to be ethical leaders and take others’ viewpoints into consideration.

It’s been 15 years since her retirement, but Withrow’s 18 years of experience as a female warden gave her insight into the difference between men and women in leadership.

“I think it’s the ability to listen–put your ego aside and just listen to what the issues are from the point of view of all players,” said Withrow.

“Hillary Clinton’s nomination is huge,” said Dial.“It’s really big for us. It’s even giving me goose bumps right now. The possibility to have a woman president is insurmountable.”

America faced its first presidential election with a female nominee of a major national party this year. While Clinton was not able to secure the presidential win, women finally saw their gender represented in the race for the most powerful position in the American government.

“I think that’s long overdue,” said Saunders. “I personally don’t think Hillary is the perfect person for it, but… some good is coming out of it. So, I’m grateful for that.”

The issue that faced Clinton in her run for president is also prevalent in businesses across the United States. The World Economic Forum conducted a 2014-2015 Executive Opinion Survey to discover to what extent American companies provide women the same opportunities as men to rise to positions of leadership. On a scale from one to seven, with seven meaning women have equal opportunities for leadership positions, the United States received a 5.1 rating. That’s 5.1 out of seven.

While 5.1 is an improvement, Withrow said, “I think if Hillary fails to be elected, it will be a huge indicator that misogyny is alive and well.”

Election day was November 8. Despite Clinton’s loss, she made her story part of women’s history and the popular vote revealed vast support for a woman leader.