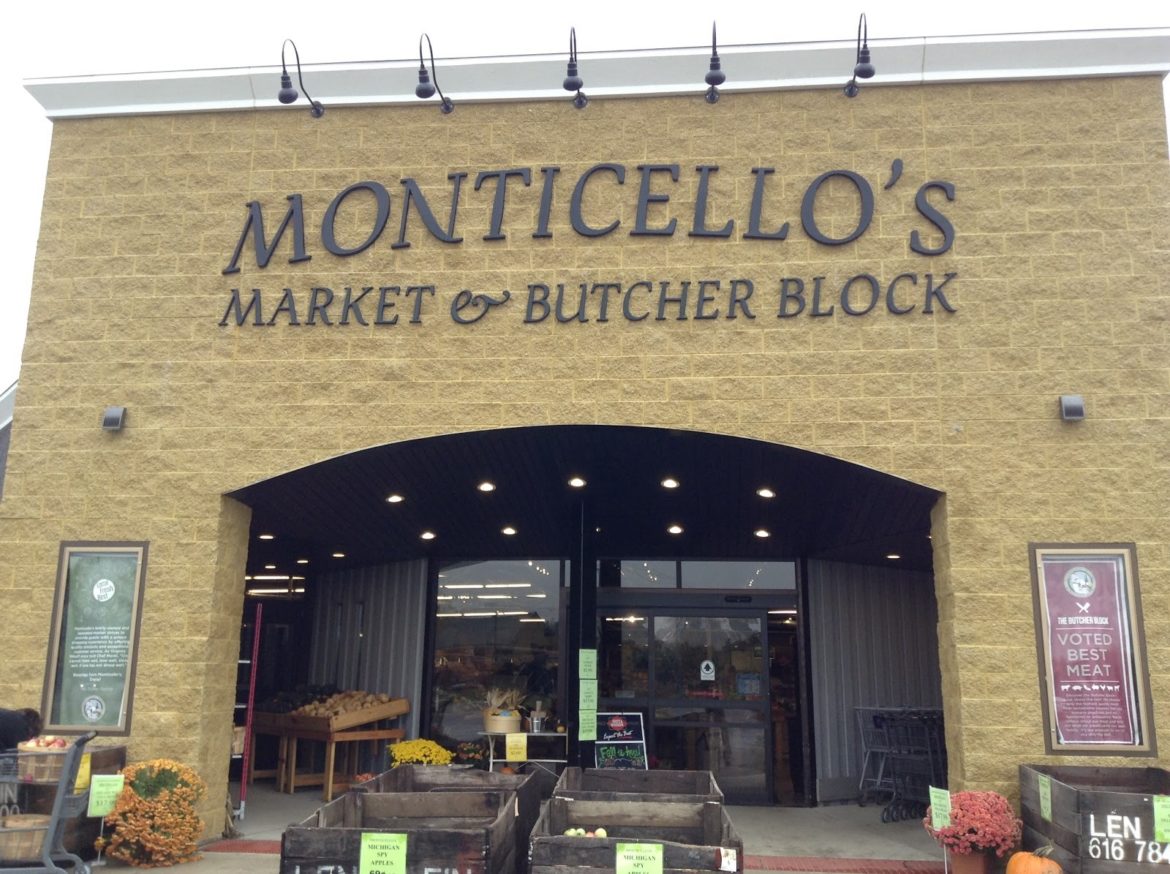 The store front of Monticello’s market, a local market in Haslett just minutes away from the new Costco site. (Photo Credit: Michael Epps)

Monticello’s is a family-run market in Haslett branded as the local, fresh market and butcher of the community. With a new Costco store coming to Meridian in Fall 2017, local businesses like Monticello’s understand how different their stores are from the big corporations.

Costumers agree that these businesses specialize in values that large corporations will never be able to boast, which is why there is no worry about the competition coming just minutes away from their small stores.

“This store is definitely a niche place,” said Michael Miller, who grew up in Haslett and still shops at Monticello’s. “The customers that come here are here for a specific reason. They love the local aspect and they come to get clean and healthy food. This place has a special feel to it.”

The Meridian Township board approved an amended agreement that allowed East Lansing to establish the Costco plan over the summer. The former Four Winds Golf Course, which closed in 2001, became a vacant property that was annexed to the city of East Lansing in a deal that gave economic support to Meridian in exchange for control of the land.

While the Costco store will technically be on East Lansing’s turf, Meridian has the final say on the development and approved the plan to build the store. A gas station and tire facility will also be included in the 60+ acre site.

Located on Lake Park Road and Saginaw Highway, the Costco wholesale store requires a membership in order to shop, and offers a wide variety of goods, anywhere from groceries to electronics and furniture.

“It’s a new store in the area and a lot of people like the products that Costco offers,” said Peter Menser, who reviewed the site plan for the project in conjunction with the city of East Lansing. “Obviously there will be more cars and more traffic, which brings more attention to the other businesses on Saginaw highway.”

Menser, Senior Planner for the Meridian Township Downtown Development Authority, went through a long and rigorous approval process to make sure the project is fit for the community. A banner at Monticello’s Market, which prides itself on fresh groceries from local farmers and other sources in the community. (Photo Credit: Michael Epps)

“Pretty much everything and anything is into consideration when we look at projects like this,” said Menser. “Generally we look at site layout, landscaping, traffic, building materials, stuff like that. Anything from lot coverage and number of parking spaces to size of access drives, it has to be long thought out.”

While exciting for some residents, others are worried about the effect the store will have on the community.

“I worry when big corporations come into the community because more people might go over there and it hurts local businesses,” said Shannon Cutterman while doing her weekly shopping trip at Monticello’s Market in Haslett. “I think it will impact local places in the area, and that’s unfortunate because we need more businesses like this. Local places with good quality products.”

Cutterman, a Laingsburg resident who does all her shopping in Meridian, said she plans to stick with the homegrown markets, but not everybody can.

“I come here to get my meats because I know that they have quality meats from local farmers,” said Cutterman. “I’m willing to come here and pay a higher price for the quality and the local aspect, but sometimes if it depends on paying your bills and making ends meet, you have to shop cheaper and easier, and that’s what Costco gives you.”

“Costco sells the bulk items and that’s just what you get, and we have such a wide variety of fresh local options and our customers love that,” said the manager. “What we do carry, we’re one of a kind at it. The customers that shop here know that they can’t get this stuff at Costco or anywhere else.”