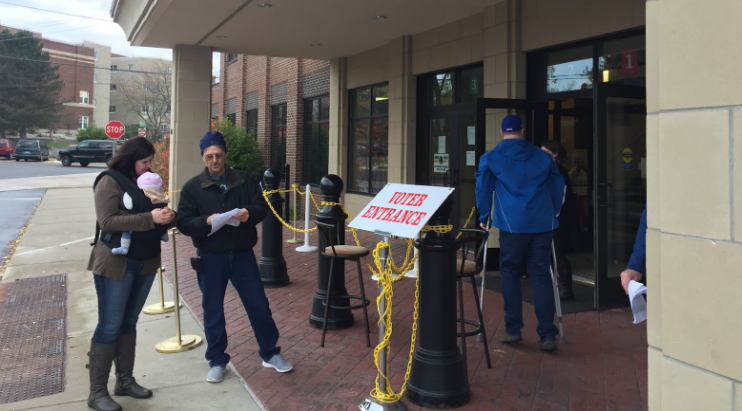 While the world watched the election of the next U.S. president, four candidates won seats on the Mason City Council. Russell Whipple, former mayor of Mason, returned to the council with the most votes, 1,955. Incumbent Elaine Ferris had 1,679, Rita Vogel had 1,620 and Angela Madden joins the council with 1,459.

“They (the other winning candidates) are all good people,” said Whipple. “We have a great slate, as good as it could have been.”

Whipple was out and about in downtown Mason with a group of friends when he found out he had won election with the leading number of votes. He had a drink to celebrate his victory, then returned home to watch the presidential election.

Whipple, 53, has been a Mason resident for most of his life. After graduating from Mason High School in 1981, Whipple moved to Massachusetts Institute of Technology to pursue a master’s of science in mechanical engineering. He is now a husband and a father to three.

Whipple was on the council from 1993 to 2008. For 10 years of those years, he was mayor. Whipple has served with several groups including the Downtown Development Authority, Historic District Commission, Water and Sewer Rate Study Committee and Selection Committee for Engineering Consultant.

Whipple was confident he would win the election.

“I have infinitely more experience than any of the other incumbents,” said Whipple.

Whipple said he wants to straighten out budget issues. “I successfully managed budget when I was in office,” said Whipple. He said he also want to help new City Administrator Deborah Stuart and wants her in office for a long time because he appreciates the work she puts into the city.

“I think it will be a good year. The Michigan Municipal League does some training for new council members which is very helpful and informative for Ms. Madden and Ms. Vogel,” said Ferris. “Mr. Whipple has been on before, he has his own perspective which I think will be a good balance.”

Ferris was born and raised in Mason and has family in the area. She was an English major at Michigan State University and is involved with ongoing education courses.

Ferris said she initially decided to run for office because there were two openings and no one was running. She started listening to the City Council before it was televised for two years. A member of the council for eight years now and a community volunteer, she said she has been and will always be a “Mason booster”.

“We are facing some decisions. The current budget calls for either reduction of services or an increase of millage and we are listening to what people want,” said Ferris. “There have been some changes in the last few years on both local and state levels that impact the budget considerably.  We are very fortunate in having excellent people working on economic development.”

She said she wants to keep Mason a “Hometown, U.S.A.” where neighbors help neighbors and work toward economic development. She is interested in upgrading communications, improving library facilities, maintaining roads and keeping the tax rate the same.

Vogel has been active in the community as a member of the City of Mason Historic District Commission, the Mason Sesquicentennial Committee, the Mason Public Schools Foundation board, the Mason Rotary Club Board, the Mason State Bank 5K committee and the Mason Farmer’s Market board. She attended Mason High School, Lansing Community College and Michigan State University. She has three children.

She has had a varied career including personal concierge, medical assistant instructor and assistant research coordinator.

She told the League of Women Voters, “Mason’s tax rate is one of the lowest in the area, and with other communities struggling to meet their obligations at a higher tax rate, I would say that Mason has done well. It is time for us to look at increasing tax revenue. This isn’t a popular idea, but it is one that is going to be necessary to maintain and improve city services.”

Madden grew up in Jackson, Michigan, and came to Mason as a place to raise her family. Being able to look out her house’s back window and see corn is important to Madden and her kids.

“They learn about the importance of every other part of the state that exists, not just the business world.”

Having run for the council in 2012, Madden said her new experiences will prepare her for office. Currently, she is executive director of the Michigan Association of Ambulance Services.

“I am grateful to the people of the City of Mason,” Madden said. She added that she looks forward to getting to know the other councilmembers.

Along with improving the city budget, Madden would like to bring increased transparency to the council, citing the difficulty of accessing information online as an issue.

“It took a lot of hard work to find the answers to questions I had about our city,” Madden said. “I want to make it easier for our citizens to find what they’re looking for.”

There were three other candidates:

Libbie Kahl is a student at Michigan State University in the School of Journalism who intends to graduate in 2019. Her specialization in journalism is sports reporting and she is pursuing a minor in teaching English to speakers of other languages and entrepreneurship and innovation.