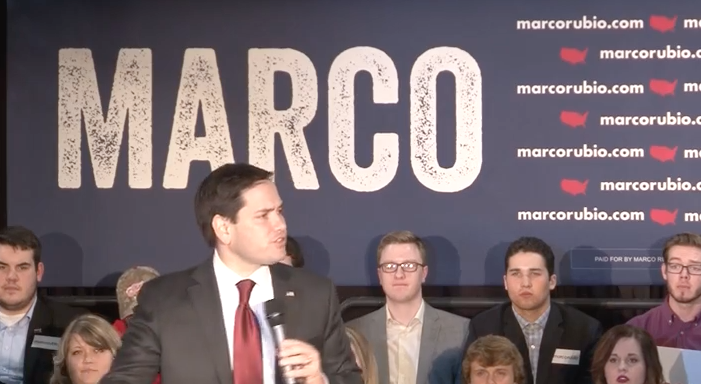 He spoke about many topics, but focused some of it on issues important to students.

The discussion about loans resonated with many of the students in the audience, including high school junior, Devin Humphreys.

“Senator Rubio is a person who had student loan debt,” Humphreys said. “He is a relatable person to the student vote.”

While not everyone in the audience has their vote set in stone, Rubio didn’t seem to mind.

“If you elect me, I will work every day on behalf of everyone, including the people who don’t vote for me,” Rubio said. “Even the people that say nasty things about me on twitter, I will cut their taxes too.”

Kit Kuhne is a senior journalism and political science student at Michigan State University. Throughout her four years at Michigan State University, she has fine-tuned her writing skills, while bridging over into another medium – broadcast. She decided on an electronic news concentration because she loved the visual elements that came with this form of reporting. As a senior, she has held an internship with After 5 Detroit, where she reported on different events happening downtown, in addition to creating their event videos. She is also currently the Senior Producer with MSU Focal Point, where she orders the run down, and organizes the news room. Additionally, she was the the Editor-in-Chief of ENT.Life, a web-based student publication. Communicating with different people and storytelling is her passion, and she hope to follow these passions throughout her professional career. She hopes that wherever her career may take her, she will continue to grow as a reporter, producer and a storyteller.