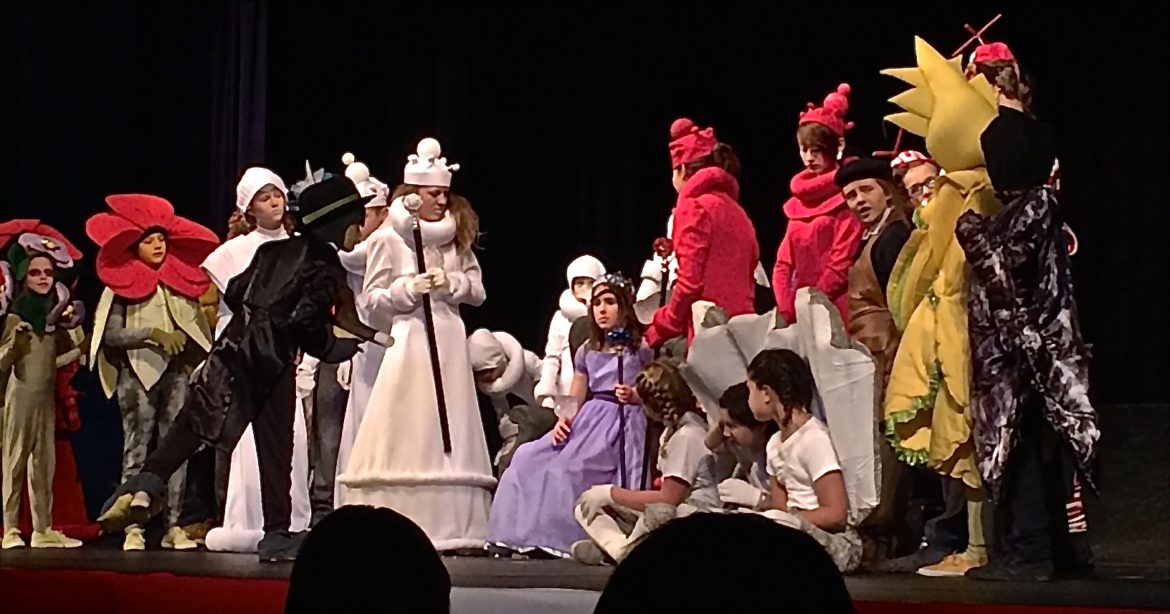 People gathered into the theater at Hannah Community Center to catch the last performance of the Alice in Wonderland spinoff performed by the children of All-of-Us Express Children’s Theatre.

Artistic Director Sarah Willis says the All-of-us Express Children’s Theatre is more than just reading lines and dressing in fun costumes. Willis, who went through the program herself, says the best part is the life skills developed in the end.

“You’re growing up and you’re learning responsibility and teamwork and how to get along with people and you’re also learning theater skills and you’re gaining confidence and all of those great things,” said Willis, “and those are what build community members.”

Willis said that while there are students who manage to play a sport and do the plays, she sees the opportunities for students who are not sports-oriented.

“This is a place people who don’t fit in other places who aren’t athletic or who don’t want to be on the debate team — they have a place to go,” said Willis.

Willis said the program is a true family affair because there is a place for every member of the family to be involved.

“We have a pair of twin brothers on props right now, and their mom, sister, grandma, everybody is in the audience,” said Willis. “Mom and dad can volunteer and the siblings can all do something — nobody is ever left out.” Willis said that one student in particular, Josh Surline, had progression that has been exciting and inspiring to watch.

“Josh watched his sister do a show, and wanted to get involved but didn’t want to be on stage — so he did crew for a year,” said Willis. “Then he decided he was going to be on stage for a lower pressure performance at our Young Playwrights Festival.”

Willis said that Josh Surline, whose sister Jessica played the lead role Alice in the latest show, made a huge step by choosing to be on stage for “Through the Looking Glass.”

“He auditioned for this show, and had his first main stage show on stage,” said Willis. “It is really great to see someone grow as a person like that.”

Josh Surline said it is important for kids to try things like theatre because it can be an outlet to be yourself.

“You get to show your true colors of what you like to do, and have fun with nobody judging you,” said Josh Surline. “It is important for kids do stuff like that.” Josh and Jessica Surline both said their favorite part of the whole experience has been going through it with old and new friends.

“The people that are always around you are probably my favorite part,” said Josh Surline.“We are always having fun together.”

“Working with the directors was awesome,” said Jessica Surline. “Memorizing all the lines was hard, but it’s important for kids to do this kind of stuff because you get to express yourself.”

Community member and foster mom Jenda Cole said she heard about the performance through her foster care agency. Cole said the agency tries to find events for foster families that have many kids in their home for them to do as a family.

“We have five foster, one adopted, and one biological,” said Cole. “Most of them are very excited. We have the teenage boys who aren’t usually into this kind of thing, but we force them to go with us anyways and they end up enjoying it.”