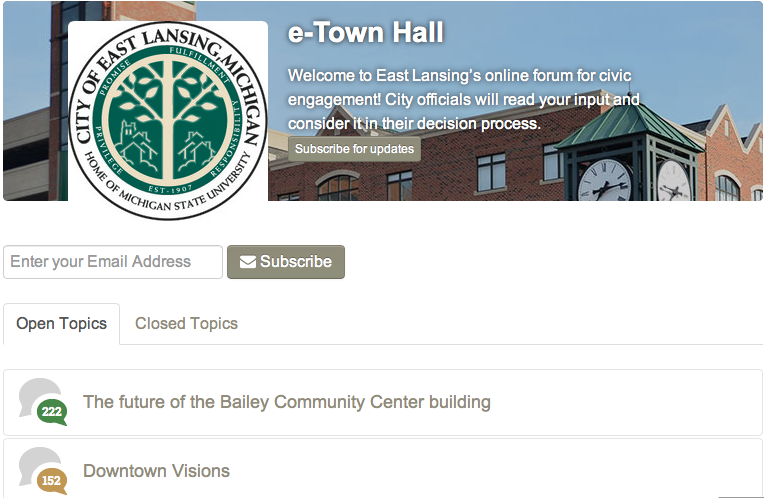 When East Lansing City Manager George Lahanas entered his position almost three years ago, encouraging citizenship, transparency and participation was at the top of his agenda.

In support of this ongoing objective, the city introduced its new approach to expanding civic engagement on Feb. 9 by launching an online forum called e-Town Hall.

“Essentially it’s providing another avenue for public input,” Megan Clark, assistant of the city manager, said. “I think allowing this provides an easier opportunity for people to weigh in and allow their perspective to be heard on the decisions that council will be making.”

According to Clark, this new medium will elicit a broader range of responses, because it allows residents to participate in local government without becoming directly involved.

“They (City Council members) hear from people at the podium or via written communications, and sometimes that limits the number of people you hear from because not everyone has time to go to a meeting or to sit down and draft a letter,” she said. Located on The City of East Lansing website, the forum currently has two topics open for citizen comments. One topic asks residents how they believe the Bailey Community Center building should be used in the future, while the other post invites individuals to vote and comment on which downtown developments they prefer.

When posting a comment, individuals are asked to provide their name and address to identify proximity to East Lansing, although residents can choose to be anonymous. In addition, visitors can provide their email address to be notified when new topics are posted and when updates are provided on past discussions.

According to Lahanas, the city has worked toward improving its connections with residents over the past few years by posting videos of each City Council meeting online and providing more support and outreach to neighborhood associations. Despite these attempts of developing in-person participation, Lahanas said he recognizes the need to initiate the next generation of public involvement by implementing the use of technology.

“If I had it my way, I would have big public meetings and people would collect like a real town hall and we would have a community feel to it,” Lahanas said. “But that’s not always realistic, so the virtual town hall is the next best thing for us.”

Nine days after the launch, Lahanas said he was happy with the traffic that the forum is receiving.

The Bailey Community Center issue had received 220 views and 23 comments, while 152 individuals had visited the topic regarding downtown developments and 25 positions had been taken.

While this new medium does not represent the entire community, Clark said she believes the forum will increase student involvement in city matters by allowing open discussion to be easily accessed through a laptop or smartphone.

“We have a lot of things that council discusses that impact students, and a lot of times we don’t hear from students, or they won’t know that changes have been made,” she said.

According to City of East Lansing Communications Coordinator Mikell Frey, the city will continue using social media to promote the tool and capture student attention.

“Students are definitely the hardest people for us to reach,” Frey said. “We have definitely heard from a diverse group of citizens, but we would like to build upon our audience.” Although City Council members view e-Town Hall as a positive environment for discussion, some East Lansing residents have doubts about its influence in the community.

Bailey Communication Association Chair Konrad Hittner said while he acknowledges the forum as a useful mechanism in allowing residents to share their points of view, many board members within the association are skeptical of the impact it will have in the city’s decision-making process.

“It’s just one more set of data points out there for decision makers to make of what they will,” Hittner said. “No one believes or assumes that what comes out of e-Town Hall is the result of some statistically significant sampling method that gives decision makers any real insight into what the electorate wants to have done. That being said, City Council members are free to take the information posted on that website to whatever degree they want.”