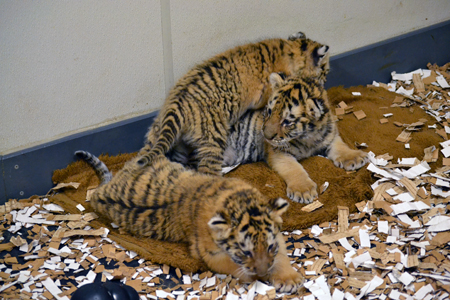 Three tiger cubs were born at Potter Park Zoo in Lansing in mid September. Just two days after birth, tests showed that the cubs had pneumonia. Since that time the cubs were held in a contained area away from their mother and father to be attended to by the veterinary staff of the zoo. The news of the births was just recently released after the cubs had proven to be making a successful comeback.

The cubs were named Savelii, Kira, and Ameliya, all female Amur Tigers. Breeding of the mother and father of these cubs was recommended by the Amur Tiger Species Survival Plan (SSP).

“The cubs are thriving” said Potter Park Zoo Director Gerry Brady. The cubs have been getting much stronger and are up to about four kilograms, up from about one kilogram at birth. Within a few weeks the cubs will be too big for handling.

Potter Park Zoo veterinary technician, Debbie Paperd said that it is hard not to get attached to animals but that it is important not to coddle them. “A hand raised animal is not always a healthy animal … they need to learn how to be a tiger and not a human because the minute an animal doesn’t fear you they see you as one of their own.” said Paperd. Hand raising the cubs is not ideal but was necessary to ensure the cubs survival.

The cubs are currently being held in the zoo’s nursery where they are still being bottle-fed. The zoo plans on putting them on display sometime in mid-December. Until then, the public can watch their activity on live webcam on the Potter Park Zoo website.