This month’s report from the Annenberg Inclusion Initiative at the University of Southern California surprised me. In examining Asian and Pacific Islanders in 1,300 films (pdf), it found that one actor — one — held a third of all the lead roles held by Asians and Pacific Islanders. 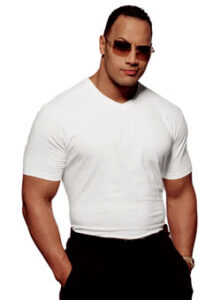 It is The Rock, Dwayne Johnson, photographed here by Jerry Avenaim.

The story is not that The Rock, who is Samoan, played a lot of lead roles in the top-grossing films from 2007 to 2019. He had 14. The trouble is that there were only 30 other APIA people in those 1,300 films to play a leading role.

The people at USC had another fact about the lack of diversity in big films.

White male actors named Ben, Chris, Daniel, James, Jason, John, Josh. Michael Robert, Sean or Tom were all far more likely to be hired as the top actor in a film than any Asian Pacific Islander woman actor by any name.