The Anti-Defamtion League reported this week that “During the two weeks of military conflict between Israel and Hamas in May 2021, antisemitic incidents in the U.S. reported to ADL increased by 75% compared to the two weeks before the fighting began, from 127 to 222, according to preliminary data.” 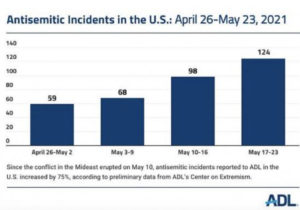 Anti-Defamation League shows rise in anti-Semitic crimes during conflict between Israel and Palestinians.

The blog said “Many of these incidents appear to have been perpetrated by individuals scapegoating American Jews for the actions of the Israeli government.” It listed several incidents in different cities.

A ceasefire to end 11 days of the worst outbreak of violence there in years conflict was declared May 20. Militants fired rockets from Gaze into Israel, and the Israeli military made strikes into Gaza. The exchange followed an outbreak of violence in Jerusalem’s Al-Aqsa Mosque, Islam’s third holiest site, in the waning days of Ramadan.

According to CNN, Hamas health officials said the conflict killed al least 248 Palestinians, including 66 children. Israel’s military and its emergency service said at least 12 people in Israel, including two children, were killed by Palestinian militant fire.

This BBC article gives one perspective on more than 100 years of conflict.