How did May become APIA Heritage Month?

This May, while attacks against Asian Americans are on the rise, we might ask how May became Asian Pacific Islander Heritage Month?

There are good reasons for that and a great story behind it.

The reasons have to do with the calendar. The story was well told by TIME.

May is significant because the first Japanese immigrant to the United States arrived in May of 1843. Again, in May 1869, the golden spike connecting the First Transcontinental Railroad was driven the railroad was completed largely by Chinese workers.

The drive for an annual designation was driven, in part, by Capitol Hill staffer Jeanie Jew.

According to a TIME story, Jew had deep personal reasons for seeking the designation. 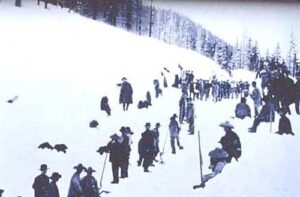 Her great-grandfather, M.Y. Lee, had immigrated to help build the railroad. Later, the Chinese Exclusion Act of 1882 barred new Chinese laborers from the United States for 10 years. It was later renewed. Violent attacks along the West Coast Lee became widespread. Seventeen people were massacred in Los Angeles. San Jose’s Chinatown was destroyed.

Lee sought refuge in Oregon from the violence, but was killed there.

At first, it was just Asian Pacific American Heritage Week and it had to be reauthorized by the president every year. It is now the full month and embraces Pacific Islanders, as well. Recently, people have included South Asians under the umbrella.