The Salt Lake Tribune reports that support for Black lives by Elder Dallin H. Oaks, the next-in-line to run The Church of Jesus Christ of Latter-day Saints, has buoyed Black spirits. 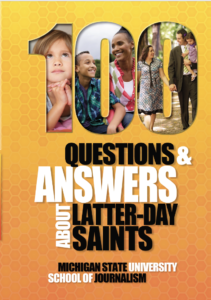 The newspaper wrote that “Oaks ‘boldly emphasized the most basic of Christian truths when stating that Black lives matter,’ said Gray, who co-founded the Genesis Group in 1971, a support organization for Black Latter-day Saints. ‘Those simple words have given solace to millions around the world, not just in the USA, while they’ve simultaneously been mischaracterized as everything opposite of what it means to be American.'”

As the Bias Busters class worked on our latest guide, which is about The Church of Jesus Christ of Latter-day Saints, the issue of racial equity in the church took some scrutiny.

African Americans were barred from full membership for more than a century. Although that ended in 1978, the hurt is still there.

This is how we handled the question in the guide:

Historically, did the church exclude people of color?
The Book of Mormon states, “black and white, bond and free, male and female; … all are alike unto God.” In the early days of the church, some Blacks were ordained as priests. However, in 1852, Brigham Young forbade any Blacker men from being ordained. Other restrictions followed his death. Black men and women were not allowed to participate in temple endowment or sealing ordinances. In 1978, then-president Spencer Kimball had a revelation saying Blacks could become priests. The ban was removed without apology. Today’s church includes Black, Asian and Latino Apostles at the quorum level. An estimated 6% of Latter-day Saints are Black.

Oaks, who is in line to succeed Russell M. Nelson and become the church’s 18th president, may be laying down some markers as to what he will do in his term.

“100 Questions and Answers About Latter-day Saints” is available from Amazon or the Front Edge Publishing bookstore.

This entry was posted in Church of Jesus Christ of Latter-day Saints. Bookmark the permalink.