On June 13, this website wrote about newspaper style and advocated capitalizing Black when referring to race, ethnicity or culture. This was in exception to Associated Press style, used throughout the journalism industry. Our post explained that students in the Bias Busters class in the Michigan State University School of Journalism broke with the AP five years ago in publishing “100 Questions and Answers About African Americans.” 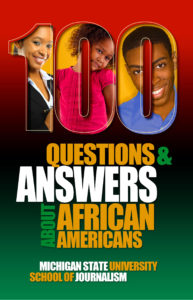 The students decided to capitalize Black, as well as White, and to carry that style in future guides in the series, which now numbers about 20 guides.

On Friday, the Associated Press changed its style.

John Daniszewski, vice president of standards, wrote Friday that AP’s decision to capitalize Black “conveys an essential and shared sense of history, identity and community among people who identify as Black, including those in the African diaspora and within Africa. The lowercase black is a color, not a person.”

The AP has also begun capitalizing Indigenous for similar reasons.

The day before the AP made its move, CNN announced it would capitalize Black and White.

Three days before the AP changed, the Los Angeles Times made the same decision. Times Executive Editor Norman Pearlstine was quoted this way: “The conversation taking place at the Los Angeles Times and across the country reflects a necessary and long-overdue shift in thinking about racism. Without exception, The Times is opposed to racism.”

The Times noted that NBC-owned TV stations, McClatchy newspapers and the National Association of Black Journalists had recently adopted the capitalization. The newspaper noted that the Seattle Times made the change in 2019, and that others had followed.

The Bias Busters project at Michigan State applauds the change. It was a long time coming.

This is how we explained our break with Associated Press style in 2015:

“In ‘100 Questions and Answers About African Americans,’ we capitalize Black when it refers to people of the African diaspora. For consistency, we also capitalize White as a demographic term.

“Capitalization has been controversial. Some people who prefer to identify as Black want the term capitalized. They take capitalization as a sign of equality to African American, Native American, Asian American, Hispanic and Latino. Those terms are capitalized because, except for ‘native,’ all are proper nouns.

“The case for lowercasing is that this is convention. This is the way it is in the Associated Press Stylebook used by many journalists. Following AP style and our mainstream peers would seem to enhance professionalism and credibility. Certainly, it wouldn’t raise any questions. But no publication is bound by AP style. Many adopt exceptions that make sense for them.

“For us, in the context of this series, the reasons for capitalizing Black as a racial, ethnic and cultural identifier outweigh conventions. We will capitalize Black in this and future guides in the series and as we update earlier guides.”

We support AP’s reversal, but certainly take no credit for it. Rather, we would like newsrooms not to silently “follow AP style” as journalists so often do. We would like to see them deliberate, discuss and declare to readers and audiences why they are changing their past practices.

This is much more than a change of style. It is a change of heart and mind. Explaining it is rooted in our ethical obligation to be transparent and accountable.

This entry was posted in African Americans, Ethnicity & Race. Bookmark the permalink.