The man who gave us that powerful idea, Judge Damon Keith, died this morning at age 96. 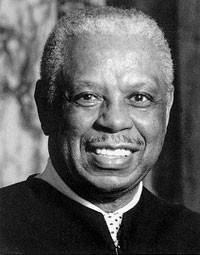 Many are attesting to what we have lost.

His quote is repeated, paraphrased or abridged so often it is sometimes disconnected from its context. Here is the context:

Keith, a judge on the U.S. 6th Circuit Court of Appeals in Cincinnati, was writing in the 2002 case of Detroit Free Press v. Ashcroft. The issue was a U.S. Department of Justice order in the wake of 9/11 that immigration judges should close to the public and the press all “special interest” immigration hearings. There was not even to be a public record of the hearing. At issue was the case of Rabih Haddad. A Lebanese national, Haddad was arrested after his temporary visa expired. He was accused of operating an Islamic charity suspected of channeling money to a terrorist organization. Haddad was denied bail, detained, and his deportation trial closed.

If you want information, read our guides. If you want wisdom, read Keith’s writing.

This entry was posted in Arab Americans, Immigrants, Muslims. Bookmark the permalink.