The Blue Wall of Silence, also called the Blue Code or the Blue Shield, is a protective silence by police about officers who commit crimes, including police brutality. 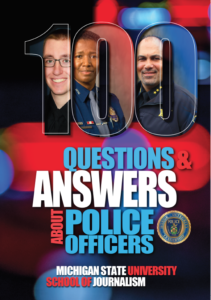 The murder trial of Derek Chauvin, charged with killing George Floyd in Minneapolis on May 25, 2020 has been cited in the press as a case where that silence crumbled, collapsed, was dented or cracked.

Prosecutors called the Minneapolis police chief and officers about the arrest, in which Chauvin knelt on Floyd’s neck for 9 minutes and 29 seconds.

The code of silence in other cases has included officers declining to testify or turning off their body cameras.

In the #BiasBusters guide “100 Questions and Answers About Police Officers,” there is an entry on the blue Wall of Silence. It says, “Police and deputies swear to protect the community and civilians, and they also back up and help each other. When an officer is in trouble, the first person to help is almost always another officer. This contributes to the idea that a code of silence keeps officers from reporting each other’s wrongdoing. This idea is behind a 1988 movie, “The Thin Blue Line,” about a wrongful conviction. It is also true that many officers want to see bad cops brought to justice and that they initiate or lead investigations into corruption.”

NPR reported that Minneapolis activist and civil rights attorney Nekima Levy Armstrong said she hopes “officers will be more willing to intervene when they see their fellow officers engaged in misconduct or abusing someone out on the streets.” However, NPR reported, “she remains skeptical of the trial’s outcome, given the history of juries often failing to convict police officers around the country.”

“100 Questions and Answers About Police Officers” is available from Amazon or the Front Edge Publishing bookstore.

This entry was posted in Police officers. Bookmark the permalink.