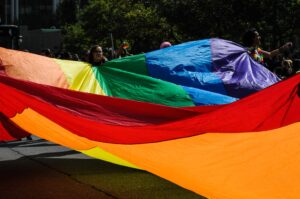 The polling company surveyed 15,000 people over 18 and 86.7% identified as heterosexual or straight, while 7.6% did not answer the question.

In 2020, Gallup asked people to be more specific about their gender identity and sexual orientation. They could specify lesbian, gay, bisexual or straight and could say whether they are transgender.

Almost 55% of the respondents identified as bisexual. Another 24.5% identified as gay with 11.7% identifying as lesbian and 11.3% as transgender.

The survey extended a trend of younger generations identifying as other than heterosexual. The highest proportion was among Generation Z, whose oldest members were 18-23 in 2020. One in six said they were not heterosexual.

This entry was posted in LGBTQ+, Sexual orientation. Bookmark the permalink.