Red states, blue states, how did we get to this divide and at what cost?

Cultural strategist Philippa P.B. Hughes looked at who she was spending her time with and did not like what she saw. Or what she didn’t see. Most of her contacts were with people who were, like her, liberals. In the election, we would have called them blue-state people. 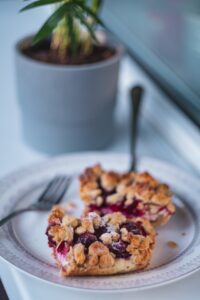 Photo by Dilyara Garifullina via Unsplash

What could she learn, she wondered, if she spent time in a group that mixed red and blue — and could talk about their political views?

Hughes is founder of CuriosityConnects.us and, as a self-styled social sculptor, she has produced hundreds of activities since 2017 for people to engage with art and one another.

In that vein, she created Blueberries & Cherries, a dinner club that brings Democrats and Republicans to the table to talk about their beliefs in hopes of better understanding. In an opinion piece on CNN, Hughes wrote, “I began hosting dinners in my home, each one ending with a blueberry and cherry crisp that would dissolve into a symbolic purple goo.”

That led to Looking for America, which hosts art events and conversations about what it means to be American.

On Dec. 10, Hughes will take her strategy about turning our political divide into purple goo to the Freedom Forum’s YouTube channel at 2 p.m. See what you think.

This entry was posted in Politics. Bookmark the permalink.